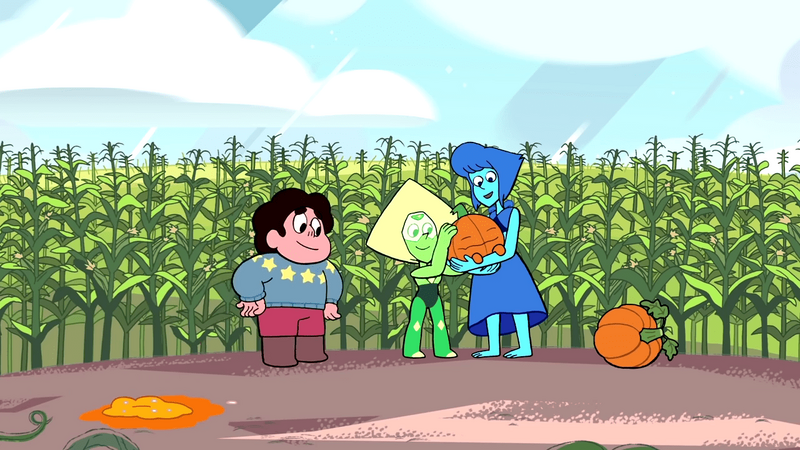 Kat Morris was asked about how characters are sometimes able to fuse without dancing. She replied “more than the dance, it’s about a mutual understanding.” In a question about the “odd couple” relationship that Peridot and Lapis now share, Shelby Rabara joked “opposites attract” with a lot of heavy winking at the shipping community. Rebecca Sugar was asked about her favorite song she’s written, and she surprised the room by saying “Everything Stays” from Adventure Time. When asked if there was anyone she really wanted to collaborate with on an episode, Sugar said that Estelle had recently made her fall in love with the music of Emily King. One fan also asked Sugar if she had any plans for the ending of the show. Sugar replied “I do have an ending. I can’t say anymore.”

The cast were also asked about their favorite episodes that they had personally worked on. Rebecca Sugar listed “Mr. Greg” as her favorite episode, because she had always dreamed about working on a musical. Tom Scharpling also chose Mr. Greg, although he commented that he always dreads having to learn songs. Kat Morris listed “Jail Break” as her personal favorite. Charlyne Yi said her favorite as Ruby was “The Answer,” and AJ Michalka listed Stevonnie’s debut “Alone Together” as her favorite. Jennifer Paz instead gave her favorite moment as the introduction of Lapis, specifically the first moment with the smackdown of the water hand. Shelby Rabara listed her favorite Peridot episode as this summer’s “Too Short to Ride.”

Okay, I’ve met my word count, now I can get to the thing you actually clicked on the article for. Steven Universe will be returning in November for a half-hour special titled “Gem Harvest.” From the preview clips, we know the episode will be about Peridot and Lapis growing crops believing this is similar to the way gems are grown. Steven helps them out by bringing crops to life. Even more exciting, Peridot rides a tractor for the first time! I am excited for her. Sugar also teased that an upcoming episode will be titled “Three Gems and a Baby.” The crowd went nuts when Sugar brought out her ukulele. We were also treated to a preview of an upcoming song titled “I Could Never be Ready” sung as a duet between Sugar and Scharpling. Here’s a clip!

Fandom had a chance to interview most of these folks after the panel. Check out what they had to say about fusions, casting, and writing songs for the show. Read it all here!