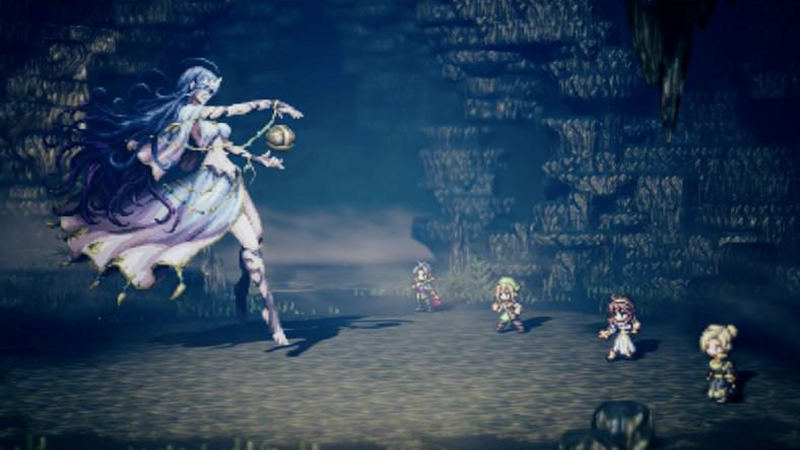 ‘Octopath Traveler’: How to Obtain and Master the Four Secret Jobs

Octopath Traveler is a terrific – if flawed – Switch game that makes up for each of its missteps with charming characters, majestic graphics, wonderful music, and stellar combat and class systems. Playing around with different class and party combinations is borderline addicting in Octopath Traveler and precisely the customization fix many JRPG fans crave. While each of the standard sub-classes is pretty easily found and unlocked over the course of playing the game – more on finding and utilizing those over here – there are also four secret jobs hidden on the map.

These hard-to-find jobs boast some of the best abilities in the game and allow for even more robust strategies in battle. Earning them is no easy feat, though, as some of the most challenging bosses in the game guard them. Here’s everything you need to know to find, earn, and master the Sorcerer, Runelord, Starseer, and Warmaster hidden classes.

Don’t even think of going after any of the hidden sub-classes until you have a well-balanced active party where each character is at least level 50 or higher. Like the rest of Octopath Traveler, the level 50 recommendation you see before entering a hidden shrine is closer to a requirement. Unlike other shrines, you will have to fight hordes of enemies in pursuit of each secret class on top of a corresponding guardian deity that can completely devastate unprepared parties.

On top of an appropriately leveled party with maxed out jobs and sub-jobs, you’re going to want plenty of recovery, SP-boosting, and BP-raising items. Thankfully, by this point in the game, you should have plenty of these items and enough funds saved up to stock up on large grapes, nuts, and pomegranates (which are also common steals). This effort won’t go to waste, though, as you will soon experience a white-knuckle boss fight, a terrific new class, and a peek at some of Octopath’s enticing lore.

The Shrine of the Archmagus is found in the East Duskbarrow Trail in the far Northwest corners of the Woodlands, not too far away from the Shrine of the Huntress. This dungeon contains elemental enemies that serve as a solid warm up for the boss fight ahead.

Dreisang the Archmagus is, unsurprisingly, one of the strongest magic-focused bosses you’ll encounter in the game. Between his ability debuff your entire party, damage everyone simultaneously, and alter his weaknesses, he’s a pretty significant threat. Thankfully, the Cleric ability Reflective Veil will send these elemental attacks right back to him. When used in conjunction with the divine Dancer ability Sealticge’s Seduction, the entire party will reflect his attacks and passively cause massive damage.

Pro tip: Try to break Dreisang at the start of the battle, as his Divine Majesty prevents your party from getting buffs (including Reflective Veil). He is initially weak to Sword, Axe, Spear, Lightning, and Light. The Warrior skill Thousand Spears is particularly helpful here, as it can strike 5-10 times.

Once you earn the Sorcerer class, you find it to be one of the best classes in the game for adding coverage to your party. Active Sorcerer abilities allow you to attack enemies with every kind of elemental damage in the game and make them more susceptible to magical damage. Its passive skills also increase damage output when using elemental moves, grants a chance for enemy debuffs, and increases the power of attacks when an enemy is weak to them. Basically, if you need a solid fill character or want to make attacks even more devastating, have a character explore the Sorcerer job.

If you need a bit more guidance in earning the Sorcerer job, be sure to check out Anamana!’s video on the subject.

South of Evenhold and deep within the Highlands lies the Tomb of the Runeblade. This shrine is rather easy to get to as the overworld path to it is relatively obvious and free of passages hidden by the camera perspective.

Waiting at the end of the dungeon and atop an imposing pedestal is Balogar the Runeblade. Balogar primarily attacks the entire party with elemental strikes, but can also target specific characters for more damage and temporarily prevent attacks that he’s ordinarily weak to from lowering his break counter. This fight doesn’t necessarily necessitate a special strategy, as the general practice of lobbing debuffs at him while spending BP when he’s at his weakest should do the trick. However, be sure to bring along protagonists that use Axe and Dark attacks, as those are the two weaknesses that he cannot guard against.

The Runelord job is unique among the secret jobs as it augments physical abilities with additional elemental damage. Runelord active abilities add an extra elemental attack to the end of a character’s physical attacks. The Runelord support abilities mainly center on boosting stats, but the SP Recovery ability is advantageous in builds focusing on class abilities as it recovers SP whenever a character takes damage.

Be sure to check out this video if you need a bit more guidance in this hunt and battle.

In the Western Wispermill Flats found in the Flatlands, the Shrine of the Starseer hides. This area of the map features a farm that connects to the Shrine’s dungeon when you approach the cattle and take a hard left.

Steorra the Starseer is a tough foe in the best of circumstances and borderline unbeatable if you don’t have a solid strategy prepared beforehand. Steorra can reflect physical attacks, attack the entire party at once with multiple kinds of elemental damage, and alter her weaknesses after breaking her defenses. Thankfully, a combination of the Cleric’s Reflective Veil ability and the Dancer’s Sealticge’s Seduction return her elemental attacks to her for massive damage. Beyond that having a character with Scholar, Sorcerer, or Runelord abilities is useful in uncovering her weakness after she resets them.

Once you have the Starseer job, you’ll find that it’s one of the best support classes in the game. This job’s active abilities all center on buffing multiple allies at once, providing health and BP supplements, and weakening several enemies simultaneously. The Starseer’s passive skills are all tremendously useful as the Hard Worker ability raises the amount of JP earned from battles and all of the other abilities provide benefits valuable in any team composition. If you’re looking to power up a support character or master other classes in the game more quickly, the Starseer is a perfect fit.

Be sure to click here for more on how to find and earn this helpful profession.

To the Northwest of Riverford in the North Riverford Traverse lies a cave hidden to the south of the northward bridge. Here you can find the Shrine of the Warbringer and the trial you must complete to earn the Warmaster job.

Winnehild the Warbringer is an imposing, six-armed, physically oriented war god. Not only is she able bolster the number of hits needed to force her into the break status, but she can also attack party members individually and collectively with physical attacks and counter physical blows against her. Spellcasters are vital in this confrontation, as Winnehild is weak to Ice, Wind, and Dark elemental damage. One top of inflicting magical damage, it would be wise to have abilities and items that boost your party’s defense, evasion, and lower the Warbringer’s physical attack.

Pro tip – If you’ve already beaten Balogar, the Runelord skill Transfer Rune — which allows skills that normally target yourself alone to target your allies as well — makes this battle a breeze. If you make Tressa a Runelord (Runelady?), her side-step ability will dodge any incoming attacks. With Transfer Rune, your party will be untouchable.

The Warmaster class is both incredibly straightforward and ridiculously powerful. Not only can this class allow you to wield all six kinds of weapons in the game, but it also features abilities that inflict-weapon based damage. This class also features support abilities that help transform a traveler into a sturdy and hard hitting tank, and the Extra Experience skill that helps the party level up more quickly. If you want a character that is as sturdy as they are hard-hitting, be sure to equip them with the Warmaster class.

Once again, Anamanga! has even more info on this fight and class.