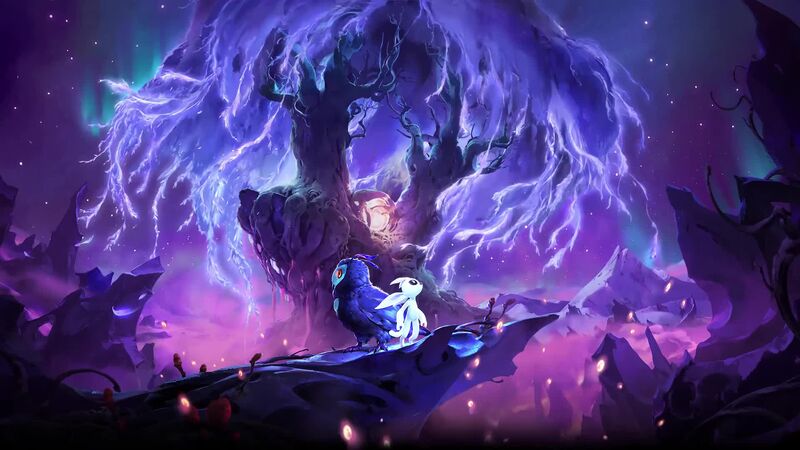 “I think any time you elevate level design beyond just a linear path, and you start to focus on making exploration feel just as fun as combat — on making the player feel as engaged with level design as they are with how the game plays — people inevitably start to draw comparisons to things like Metroidvania,” Marty Stratton, director of Doom Eternal, tells us in an interview.

We’d played Doom Eternal just before we played Ori and the Will of the Wisps at a pair of preview events in London, and though the games couldn’t be more separate on a spiritual level, Doom Eternal’s new incrementally-unlocked traversal abilities, its central hub area, and its respect for hiding secrets in plain sight all feel very inspired by games outside of the first-person shooter space.

“There’s something we like to say of Doom Eternal, that it’s fun on the outside, smart on the inside, and I think that same thing could absolutely be said of [Metroidvania], too.”

The idea of great level design reminding players of Metroidvania games — simply because of the genre’s association with intelligent planning, thoughtful progression, and liberal, cheeky use of secrets — is something that isn’t lost on the developers currently resurrecting the genre.

Right now, Metroidvania is going through something of a renaissance. Ori and the Blind Forest, Hollow Knight, Dead Cells, Axiom Verge and – arguably – Celeste, have all emerged in the last few years to critical and commercial success, proving that once again gamers have a voracious appetite for all things side-scrolling.

The indie resurgence of the genre is making such a splash in gaming that you can even feel its impact in massive AAA games like Doom Eternal.  So who do we have to thank for the return of collectible-based sadism? Moon Studios – the studio that instigated this new wave of Metroidvania classics with its sleeper hit, Ori and the Blind Forest back in 2015.

“I feel like when Blind Forest released, we were just at the cusp of a resurgence of this wonderful genre,” agrees Daniel Smith, senior producer at Xbox Games Studios. Smith has been at Moon Studios on the Ori franchise for the past five years – working on the original game, the Definitive Edition, and now on the upcoming Ori and the Will of the Wisps.

“Blind Forest was trying to pay tribute to a lot of Metroidvania games we grew up and loved – games like Castlevania: Symphony of the Night and Super Metroid, and I feel like we made a splash. It’s one of our favourite genres and there’s been such fantastic games coming out of it lately with Hollow Knight and Dead Cells…Celeste and it just goes on and on.”

Each of the figureheads of this new wave of Metroidvania has taken an element of the genre and toyed with it, reworking the classic tenets of what a Metroidvania game should be and remixing it to better appeal to a modern audience. Hollow Knight played around with the Charm system, and put mechanical progression squarely in the hands of the player. Dead Cells went down the Rogue-lite route instead, weaving two genres together and merging the best elements of both to make something wholly unique (and utterly addictive).

Ori and the Blind Forest updated the Metroidvania formula for the modern player in the same way that these other games did – playing with new save systems and introducing some of the most inventive traversal and movement systems we’ve seen in platformers in years – but it was the game’s surprising approach to storytelling that really wowed its audience.

“One of the many ways we tried to elevate the Metroidvania genre was in how we approached storytelling,” Smith tells us. “Blind Forest was emotional – that’s not something that’s super typical in this kind of game. And to see the story celebrated – to see it land as something that resonated with players, that was emotionally impactful – that’s honestly one of the best points about releasing the game.”

The team has moved on to develop Will of the Wisps with that in mind, hoping to raise expectations for the level of emotive, meaningful storytelling that an action-platformer can portray.

The Pixar of Platformers

“One of the ways we’ve tried to expand the IP and be a true sequel is by introducing a larger cast – there’s a huge cast of characters now, and I hope we have the same impact that we did with Blind Forest,” Smith explains. “We’ve taken a lot of time and attention in making the storytelling in Will of the Wisps equally as deep as the original. There are sad moments, funny moments… we’re trying to celebrate the genre not just by being inspired by the storytelling we’re all fans of – The Lion King, The Iron Giant – but by having them reflected in the game, too.”

Smith’s reference of these 90s animation classics makes sense – playing Ori and the Will of the Wisps is like playing a video game produced by Pixar: every single animation is gorgeous, the way the world moves and reacts to you is outstanding, and you’d be forgiven for thinking that any given sequence was hand-animated… not that you were sat there, controlling everything you see on screen with a pad in your hand.

And that’s intentional. After all, a platforming game of this scope and scale (three times bigger than Blind Forest!) lives and dies on its world – if it’s boring, or doesn’t interest you visually – there’s going to be no incentive to backtrack, no temptation to pick at every seam in the world to see what secrets you can uncover.

Making the boss fights match the scale of the gameworld

The same goes for the characters. Moon Studios knows that its central cast of anthropomorphic Disney-like creatures won over the hearts of the community the first time around, and are playing on that again for the sequel. With more resources and a broader understanding of the engine it’s using, Moon Studios has pumped more effort into the character models, and even pulls the camera in closer to better communicate their intentions and reactions to the world around them to the player.

“We can go so much further this time around, especially in communicating our overall intimacy with the characters – we can pull the camera much closer, Ori can be much bigger on-screen, and that’s had a significant impact on the storytelling.

“But even beyond that, in Blind Forest, we weren’t technically capable of doing these really large bosses, or large structures in the environment. But the new boss fights – which are huge! – are welcome new additions to the Will of the Wisps. There are really large, dramatic boss fights in the game that have multiple phases, and some of those phases incorporate an escape sequence where this massive boss comes chasing and smashing after you… it’s really a step up.”

Ori and the Will of the Wisps takes everything that made Blind Forest great and scales it up. Whether you’re talking physically expanding the scope of the game, and the room you have to play with, or the themes and philosophy behind the game design… everything has been leveled up, elevated, in order to celebrate this genre that is now taking the gaming world by storm once again.

“I feel like Ori and the Will of the Wisps will become a part of [this new Metroidvania] family, and I think it’ll help elevate the genre, too,” nods Smith. “I want to see more games in this space – they’re a vessel for such a fantastic level of expression. The mix it allows for in the freedom of exploration — and the cleverness in gating areas, how you can conduct these ‘aha!’ moments when you get the right ability to enter a new space– I’m very passionate about this genre, and seeing it grow over the last [console generation] has been amazing.”

Going back to the what Marty Stratton from Doom Eternal said about Metroidvania, and the influence this new school of games has on projects outside the genre, we asked Smith if he was aware how this once-niche type of game is impacting the rest of the industry – how Ori has been cited by developers in major publishing houses as an inspiration for titles well outside the platforming space.