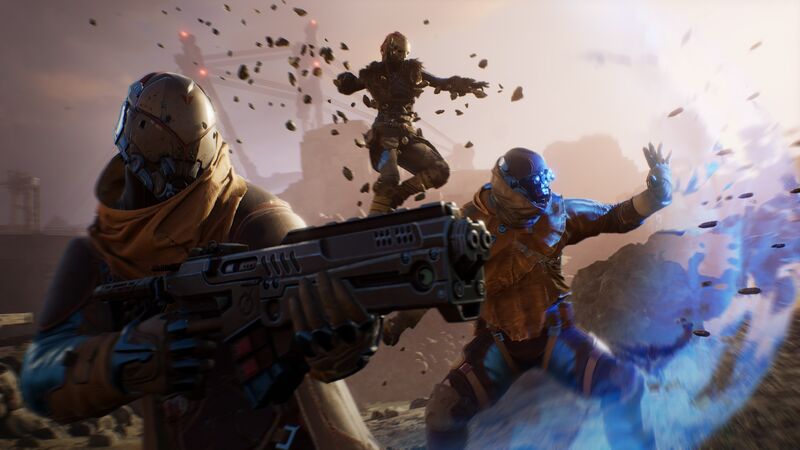 People Can Fly is a fascinating studio. Just two decades old, they’ve already cemented their legacy in the annals of shooter history. As well as creating staunchly ‘old school’ gunplay victory laps like Painkiller and Bulletstorm, they’ve contributed to some of the past decade’s most influential weapons-first games. People Can Fly played a crucial part in delivering the Gears of War franchise and most recently worked on the lesser-known first iteration of Fortnite — now referred to as ‘Save the World.’ Now, after years of obscurity, they’re back — with Square Enix’s Outriders.

When you buy a People Can Fly game, you can guarantee one thing – if you pull the trigger, it’s going to feel good. Yet in recent years, the company’s appetite has changed. “We worked on a lot of (Epic Games) projects and wanted this chance to have more creative freedom,” Creative Director Bartosz Kmita explains to me in Warsaw, the base of People Can Fly’s flagship studio.

The franchise fixers bought their way out of Epic agreements and into independence in 2016 and are now working on their own IP, Outriders, a project that has been in the works for four years now. It’s a 1-3 player looter shooter that will land on PS5 and Xbox Series X in the holiday season. We were given access to the first three hours of the game in a neon-hued event hall in Poland.

The story of Outriders follows a group of soldiers who step into a nightmare on the planet of Enoch, a colony brimming with potential for a dying Earth crippled by climate change. In Prometheus-esque scenes, Enoch unleashes a gooey ferrite substance and a powerful force known as ‘The Anomaly’ which kills and corrupts the humanity of most of the pioneers, forcing the survivors into a 30-year cryosleep as the invading force scrambles (and fails) to find a cure.

One rude awakening later, you find yourself in an Enoch overrun with monsters and tribal factions who mill the depths of human cruelty, enslaving and hanging those who challenge their dominion. The authoritarian ECA makes up the other side of this civil war – they’re cooped up with the remaining technology establishing an apocalyptic Elysium.

Our Anomaly-afflicted protagonists awaken ‘Altered’, and can pick between four set classes that afford peculiar skills – there’s the time-bending arsenal of the rogue-like Trickster, the fiery AOE skills of the Pyromancer and the craggy armor of the Devastator – Outriders’ Tank class.

Despite the clear genre conventions, People Can Fly were quick to bat away the initial comparisons to games like Destiny and The Division. Games of this nature live and die by how they’re supported in the long run, but Creative Director Bartosz Kmita is promising an alternative approach.

“We don’t want this comparison – mainly because not 100% of players will be interested in a loot and grinding game,” explains Kmita. “We have a strong story component and there will be some endgame challenges and content, but as stated earlier, Outriders is not a game as a service.”

To start, there will be no loot boxes or pay to win. It’s an RPG first and then a shooter – it has Mass Effect style branching dialogue trees, a composition by Fallout’s Inon Zur and hours of cutscenes. We’re introduced to Jakub in the prologue, a wise-cracking Polish driver. He was the first of many charming characters, with some surprising NPCs spitting out cynical jibes about the problematic act of colonisation. One scientist talks about the ignorance of “burying the new world in concrete and plastic” whilst another laments the death of the internet.

We’re told that the team drew on elements of Polish folklore and ‘dark nature’ to inform the makeup of the game world in Outriders but that in general, it is a multicultural experience that doesn’t just draw from their own backyard. “We’re not just talking about the Polish journey to space,” Kmita tells me. When probing about the sci-fi influence behind the game, Fandom was told that Outriders is “more Gravity than Star Wars.”

The concept of a planet rebelling against its colonisers is potentially quite thoughtful in comparison to its peers, but we still wondered whether this tricky aspect of history would be handled with enough care in Outriders. Far too many games perpetuate the myth of the savage (noble or not) and use sci-fi tropes and aloof humour to paste over the horror of colonisation – it’s often framed as a necessary evil, without consideration of the human or animal consequences.

The results of a failed colonisation often devolve into potentially offensive savagery too. And what do you know – in the prologue, we’re captured by a skull-helmeted tribe who enslave and murder people by the dozen in their caged camps.

It’s led by Reiner, a burly bloke with a thick accent. Our truck peels through a tunnel littered with hanged corpses and we fight our way out via a swampy trench full of vicious killers. Shock tactics in the prologue, sure – yet when we put our concern to the lead narrative designer Szymon Barchan, he provides a somewhat hopeful retort:

“We have a 200-page document which is informing how we create this world. It’s being worked on by people who have been thinking about how the spaceship would be built and how colonisation would look in a hundred years,” Barchan tells me. “We refer to it a lot!”

It’s reassuring to hear that this is something People Can Fly is thinking about – but the true handling of it will come out in the wash.

One of the most intriguing innovations in Outriders is the inclusion of ‘World Tiers’. As you level up, you unlock layers of challenge which you can jump between depending on your desire for difficulty. Each rank of the world tier system offers rare weapons as rewards and will increase stats like drop rate and enemy difficulty.

It’s a smart way to introduce balance and scale into the world and make it something that the players themselves can control, rather than leaving it in the omnipotent hands of the developers.

“We know that there are players who want to dig into the story, where others will be seeking a challenge. We have quite complex A.I – a small nightmare for us – because we want to give different groups of people different experiences,” Kmita explains.

This isn’t just PR fluff, either. They had to practically pull us and our co-op partner from our stations at the end of the afternoon play session. It was a strange feeling, especially because we were initially skeptical about the depth of a game like Outriders. Yet, once we started grinding with our comrade we quickly found that the feedback loop had dug its hooks into us.

Grinning through the Grind

In the original demo, you were only supposed to reach level 4 before the game locked your save, but we found that we could just keep replaying the side quests to delve into the higher world tiers and unlock better abilities, which we’re told were not yet final but… let’s just say, we came away impressed.

We tapped out at Level 15 as the developers watched us beat the final boss, combining our gravity well and volcano abilities to constrict and discombobulate the opposing force – the catharsis of this combo being so strong it demanded a few celebratory yells over the in-game comms every time we managed. I’d managed to snag a Legendary weapon too, a super rare frost-encrusted sniper that sends out an AOE wave of freezing ice upon landing a headshot. Gnarly.

We’ve always thought that a mark of success in this genre is when grinding – thought of as the most dull part of any looter shooter – is actually fun. Given that the guns and powers are seen as equal in Outriders with low cooldowns and quick endorphin bursts – it’s safe to say they’ve succeeded.

This plays into a frenetic style further complimented by a Bloodborne-esque health mechanic where each class can gain back slivers of life force by attacking with aggression and tagging enemies. With eight skills per class and no limits on weapon choice either, you can craft something truly versatile from the discrete parts offered by Outriders.

Outriders of the storm

“We always wanted players to be on a chosen path and make it so that the classes can be really different from each other. You can have two characters who are playing the same class but they will have a completely different style,” Combat and level designer Rafal Pawlowski tells Fandom.

“There are around 56 different combinations of the three skills available to your player at any one time, and we put a lot of effort into adjusting every single combat arena to accommodate different synergies… It was a serious level design challenge!”

You can see echoes of the past everywhere you look in Outriders. From the remnants of Polish folklore that seep out of the dialogue to the cover system grafted from their work on Gears of War – it’s clear that this game is going to be a proving ground for People Can Fly’s identity going forward. Everybody Fandom spoke to in Warsaw was cautiously excited about this independent stride into the unknown – Let’s just hope that modern looter-shooter tropes and the more difficult aspects of history that Outriders is dwelling on don’t come back to bite it.