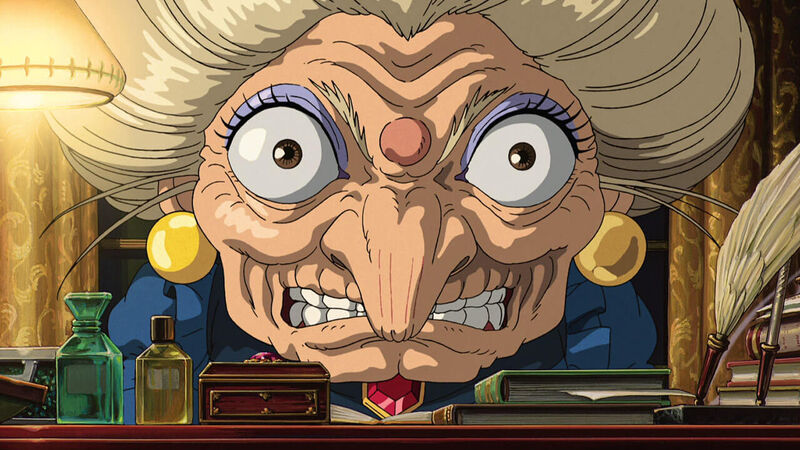 Hayao Miyazaki’s Spirited Away is heralded as a masterpiece. It deserves that and remains one of the animator’s best films in a long career of sumptuously animated and smart movies.

The film’s initial setup is simple: 10-year-old Chihiro, an only child, is moving. The film’s first scenes are similar in tone and premise to Pixar’s Inside Out, but the similarities stop when Chihiro and her parents get lost. They stumble upon what appears to be an abandoned train station and amusement park. Her parents soon find a smorgasbord of delicious food in an empty restaurant. They’re drawn by its intoxicating smell and chow down, but the timid Chihiro refuses to eat. She wanders away and spots a palatial bathhouse. A helmet-haired boy named Haku appears and tells her she must get out before nightfall. With the sun setting, Chihiro races back to her parents to find they’ve begun to morph into pigs.

When night falls, the lifeless amusement park is now bustling with bizarre creatures and amorphous spirits that walk the streets. The way back to the family car is flooded. Chihiro finds herself trapped and alone in a world of gods and monsters, a place where folkloric creatures come to have a meal and a hot bath. Haku reappears and lays out the structure for the rest of the film: if Chihiro wants to survive in this strange land, she must get a job from the cruel witch Yubaba, who owns the bathhouse. The hardships and frightening creatures she encounters there will shape her and draw out her inner bravery.

Spirited Away is rated PG by the MPAA “for some scary moments.” Yeah, it definitely has a few of those, though they are different in tone and purpose from the hellish clown in The Brave Little Toaster or the non-stop nightmare that is The Adventures of Mark Twain. Instead, writer/director Hayao Miyazaki is more focused on crafting whimsy and wonder than outright terror. Still, there is some freaky stuff going on, and the film is just so outright unusual that it amplifies the scarier elements.

Chihiro’s first deeply frightening encounter happens with Yubaba, whose wizened face, strange proportions, and gleaming red claws lend her a monstrous appearance. She’s a force of nature, a powerful witch, and a shrewd businesswoman who robs Chihiro of her own name and contracts her into slavery. Oh, and Yubaba owns a bird that shares her face. Three green heads bounce around her office, and she hides a freakishly huge baby that is prone to violent fits of rage. Like I said, it’s all really damn weird, and it only serves to heighten the menace that Yubaba exudes in every frame.

Then, there are the strange patrons of the bathhouse. In one memorable sequence, a stink spirit (a motile mass of sludge and trash) shows up looking for a bath. The stink spirit itself isn’t terribly frightening, but it’ll churn your stomach when Chihiro gets covered (and eventually embedded head first) in its reeking muck. After realizing that the stink god is full of human trash, Chihiro rallies the bathhouse staff to help her remove it all from the stink god’s body. Lo and behold, the stink spirit wasn’t what it first appeared to be — it was an ancient river god, whose face is the stuff of nightmares.

But Chihiro wouldn’t have been able to help the river god if it weren’t for the film’s most frightening creature: No-Face. His simple design is creepy in its ambiguity, and his wordless scenes with Chihiro are just as ambiguous. Is he a lonely, innocent spirit looking for admittance to the bathhouse, or is he an intruder with agenda? It’s clearly the latter, which becomes apparent when No-Face tempts the staff with gold and starts to eat them alive. He swells to a gargantuan size, trashing the bathhouse and demanding to Chihiro. In the film’s most shocking scene, Chihiro manages to subdue him by making him puke (very graphically, I might add) his sludgy guts up all over the place.

But even after all this, what makes Spirited Away demand parental guidance is that it’s quite sophisticated for a children’s film. There’s a strong immigration/assimilation metaphor that runs through the story. It’s over two hours long, with an odd sense of storytelling economy. It lingers in unconventional places and drives the plot forward with convenience and dream logic. Its peripheral characters don’t cleanly fit into traditional western narrative roles. The animation is lovingly detailed, with realistic watercolor backgrounds not seen in today’s animated kiddie fare. There’s a surprising amount of cigarette smoking, and the movie doesn’t hesitate to fling blood around. Heck, even the concept of a bath house might take some explaining to young kids from countries without a bathhouse culture.

But none of that should stop you or your kids from seeing Spirited Away. It’s a masterpiece of modern Japanese animation, and Disney’s remastered blu-ray is the best way to see it.