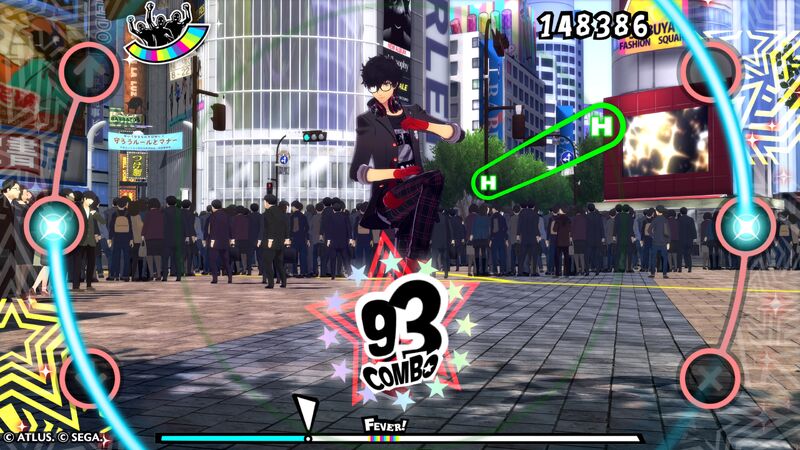 From its catchy character themes right down to its memorable menus, Persona is a series that’s always oozed a sense of style.Where most JRPGs are happy to stick to scores remembered fory sombre, piano-led motifs, Atlus’ anime-esque series has always boasted an uncharacteristically funky soundtrack. Sure, many JRPGs have iconic battle music, but they don’t make you bop like the ‘baby, baby’ refrain of Persona 3. And who would believe that taking exams could sound as hip and relaxing as it does in Persona 5?

Naturally then, it makes perfect sense to take composer Shojiro Meguro’s music and turn it into a rhythm-action spin-off, which we saw with Persona 4: Dancing All Night a few years ago. Now taking the stage is not one but two acts in their own stand-alone titles, Persona 3: Dancing in Moonlight and Persona 5: Dancing in Starlight.

Yet while this all sounds great in theory, if we’re honest, the original Vita game was something of a mixed bag, and despite the latest entries improving the experience for fans, there are still a ton of problems that put them out of sync with other rhythm games.

Tap it, hold it, scratch, update it

The rhythm gameplay of Dancing in Moonlight and Starlight is the same as Dancing All Night, which is to say it functions as you would expect from most rhythm games. Essentially, you tap or hold buttons according to the star-shaped notes that pass over the button symbols, while there are also scratch notes that can be handled either by flicking the analog sticks or swiping the touchpad.

However, where most rhythm games have their note charts clear and centre on a straight path, here you’re following notes that appear from the centre of the screen to the edges in six possible directions.

No doubt this is to avoid getting in the way of the wonderfully-animated choreography happening centre stage, but in practice, it means you’re constantly looking left to right to keep track of notes. In the previous Vita instalment, this was already a strain on the eyes and this problem is only magnified on a big screen, which  gets even worse when attempting to brave the higher difficulties.

That’s not to say we couldn’t pull off perfect combos, but it’s far from an ideal set-up. On the whole, that satisfying sense of rhythm pales compared to Sega’s own superior Hatsune Miku: Project Diva series, which also has an unconventional and erratic way of displaying notes, yet flows in a far more singular and readable fashion.

Fortunately, the latest entries show up Dancing All Night when it comes to presentation, which will likely be the biggest draw for Persona fans in the first place. These games ditch the previous entry’s po-faced meandering campaign in favour of simpler nonsense – it’s all a dream – and is all the better for it.

It’s a pure exercise in fanservice as the cast of P3 and P5 have been summoned to the Velvet Room to just dance for their respective attendants, the mischievous Elizabeth and twin wardens Caroline and Justine. Because it’s a dream, our characters can throw shapes like naturals simply by imagining themselves dancing. And it’s hard to complain once they get down to it.

It’s a particular treat seeing the Gekkoukan gang of P3 more than a decade later rendered even better than their anime designs. Even P5‘s new kids on the block see a visual improvement.

Naturally, they’re extra limber during the dancing, and the choreography does a wonderful job of giving each character dance routines that truly express their personality – Futaba and Ryuji’s dances are just as goofy as you’d imagine.

Social Events are also a much better alternative to a campaign. Unlocked as you play the game and fulfill some straightforward targets, these play out as dialogue scenes between characters, where topics range from discussing dance techniques to more trivial banter. But really, it’s just a good excuse to hang out with party members backstage like the pals you are.

Best of all, these scenes are just as detailed as the dances, with everyone fully animated and voiced, making the static talking heads a thing of the past. In other words, your favourite Persona characters have never felt more alive.

The fanservice then is pretty top notch, as are the wealth of unlockable costumes and accessories. However, the real issue comes down to the core content – that is, the songs. Are the Persona soundtracks excellent? Hell yes. Is there actually enough music to go around for a full-priced game? Not quite.

With only about 25 songs available for each title, the playlist suffers from relying on too many remixes to pad it out. Look, ‘Rivers in the Desert’ from P5 is an outstanding song, but having the original edit, a remix and, a live version, that’s stretching things a bit much.

What’s more disappointing is that a few of these songs don’t feature their own dances. You can probably justify the live song as using footage from the Persona concerts in Japan, which fans may appreciate, but simply splicing in cut scenes from past games feels lazy. When one of these is literally the end credits to P5, that’s just scraping the barrel.

This might be easier to overlook had P3 and P5 combined their playlist as one title. But as it stands, these are two separate full-price titles, which means you’ll need to purchase both if you want all the content – and that’s not including the DLC still to come.

While there are modifiers you can turn on to make the gameplay easier or more challenging, which also deducts or grants a boost to your score accordingly, it’s not really enough to make up for the thin library or the flawed design in the first place.

Taking time out from fighting shadows or stealing hearts, Persona 3: Dancing in Moonlight and Persona 5: Dancing in Starlight give you a fun way to hang out with your favourite SEES members or Phantom Thieves, while the series’ iconic music has lost none of its resonance.

However, choosing between them will be a trickier task. This isn’t like , say, choosing between two versions of Pokémon Let’s Go, since we’re talking two stand-alone games with completely different content. This ultimately makes Dancing in Moonlight and Starlight something we can only recommend to diehard Persona fans who can afford both. If you do go down the VIP route, then the ‘Endless Night Collection’, is a cheaper option than buying the two separately, while it also includes two DLC songs, and the digital version of Persona 4: Dancing All Night (as of writing, there are no plans to release this on PS4 separately).

For rhythm game aficionados, however, there are definitely more enjoyable examples of the genre that also provide better value for money (for the price of one game, you could pick up say, Hatsune Miku: Project Diva Future Tone, with over 280 songs). And if you haven’t actually played any of the Persona games at all, then we recommend you spend some quality time with those first before even considering shuffling along to Persona 3 & 5 Dancing.