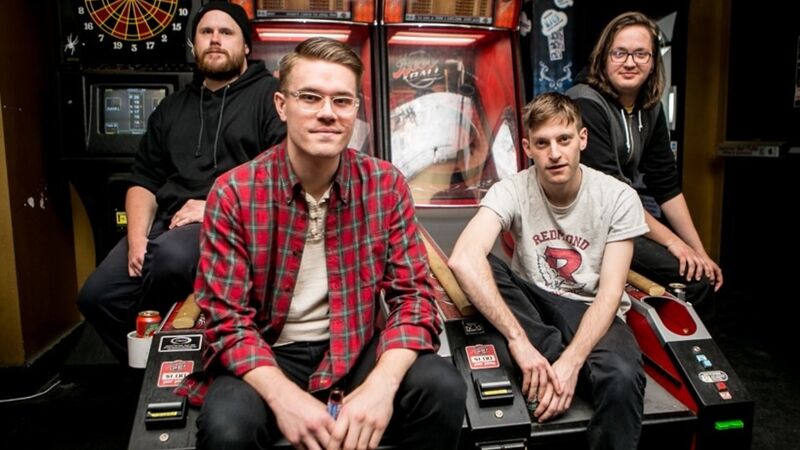 To the uninitiated, punk’s sneering attitude and no-holds-barred honesty can make the genre feel immediately intimidating. Where pop’s squeaky-clean production and bubblegum hooks greet you like a warm embrace, this distortion-soaked artform is more likely to flip you the finger and drag you into life’s darker side. Yet, despite its noisy and (seemingly) unfriendly exterior, for fans, punk is a genre that provides a welcome sense of solace and solidarity.

While the world is full of many wonderful things, it’s also filled with stresses, injustices and pain – and sometimes the most cathartic thing you can do is scream until your lungs collapse. What better place to do that than surrounded by like-minded people at a punk show?

It’s a sentiment that award-winning Canadian punk band PUP have made a career on. Cutting their teeth in grimy basements and half-filled bars, against all odds these four friends now find themselves touring the world with genre legends like The Smith Street Band and The Menzingers, building a legion of devoted fans and cementing their place as one of the most exciting punk acts of the last decade.

PUP haven’t just managed to launch their own successful career though — they also helped a fellow Canadian out. As well as being memorable in their own right, their famously cinematic music videos have also been responsible for thrusting Stranger Things star Finn Wolfhard into the spotlight, giving him one of his first major acting roles in the video for their breakout single, ‘Guilt Trip’.

Yet, despite the band’s ongoing musical success and newfound Hollywood friends, its PUP’s love for one of entertainment’s other great subcultures that has subtly influenced everything the band does.

While you may not think there’s much of a similarity between losing yourself in an MMO and diving into a mosh pit, both gaming and punk offer a uniquely immersive sense of escapism. For PUP’s drummer Zack Mykula, these two seemingly unrelated art forms have been deeply intertwined from a young age.

Hanging out with Zack ahead of their London show, he reveals that his first exposure to punk didn’t come from listening to the radio or watching MTV, but happened while he was playing PlayStation in his bedroom.

“We grew up with the Tony Hawk games. The musical component of those have been a huge influence for us. I first heard Primus and Suicidal Tendencies through Tony Hawk’s Pro Skater. It’s a really cool way for kids to be exposed to new music… For young kids to play Tony Hawk’s Pro Skater and listen to bands like Bad Religion, something that is somewhat intellectually challenging, is just really cool.”

From Mad Caddies to Mega Man

Yet for Zack, gaming hasn’t just helped to introduce him to bands he admires — it still informs and inspires the music he writes today.

“While we all work on the songs together, I tend to come up with more arrangement ideas. I’ve noticed similarities between how I structure my ideas and the Mega Man X games. I love those songs! They’re all so silly and cartoonish and obviously, you have to pare that down for a punk band context, but there’s just so much happening in those songs, and I feel like we kind of do that in a weird way. It’s just frenetic and ADD and that’s just become part of my impression of music and how to write it.

Maybe I should be writing [songs] while I’m playing Mega Man….”

While Capcom’s blue mascot definitely isn’t the most obvious source of punk-rock musical inspiration, nothing that PUP does conforms to genre expectations. Taking inspiration from artists as varied as desert-rock kings, Queens Of The Stone Age to electro pup duo, Phantogram, PUP is a band that refuses to be pigeonholed.

A big reason for that is the diet of pop culture and entertainment its members were raised on. As an 80s kid, Zack and the band quickly developed a fascination for sci-fi, falling for genre classics like Alien and The Thing. Yet while many budding musicians found themselves in awe of the haunting atmospheric soundscapes that John Carpenter penned for The Thing, for Zack, there was another tense sci-fi soundtrack that struck just as loud a chord with him.

“Super Metroid, man. The music [for that game] is just so crazy. I grew up listening to Meat Loaf and you get these epic songs in games like Metroid too, so it’s kind of chicken and egg – I’m not sure which I loved first!”

Asking him what it was about Metroid that had such a lasting effect, Zack’s eyes begin to light up, his lips curling into an excited grin. “It’s one of the best games ever! It has everything: it’s a sidescroller, it has great music… and the artwork is insane too.

“Nintendo just made the best use of the graphical capabilities at the time without overextending them. All respect to Star Fox but… it kind of looks like shit. Whereas when you’re playing Metroid on the CRT television it just looks awesome, like a really detailed comic book come to life. Cool bosses, a sense of suspense and obviously as a bonus it features a strong female character too. It’s such a trailblazing game in so many ways… and it’s really fun.”

Yet for PUP, the band’s relationship with games doesn’t end there. While we’re sure many musicians have grown up with a love of video games, PUP seem to be one of the few modern guitar bands to fully wear their geeky influences on their sleeve.

Teaming up with friend and visionary music video director, Jeremy Schaulin-Rioux, the band has released everything from pixelised homages to their childhood games, to a fully blown  ‘choose your own adventure’ style music video.

“Originally, Jeremy — who does all our videos — was talking about making a video game for [the song] DVP. It was early on so we put that on the backburner to see how the record went. Eventually, we put out some videos that people seemed to really like, so we were like, let’s just do whatever Jeremy wants! He said he had this idea for a game, and it was the most insane thing.”

That insane idea went on to become the brilliantly bonkers video for PUP’s angriest song, “Old Wounds.” Put in the unenvious position of being PUP’s tour manager, viewers can choose which band member they want to babysit but clicking a link to a different video. Tasked with either helping Zack avoid suspect craft beer traps, ordering the right pizza for bassist Nestor Chumak, or attempting to save vocalist Stefan Babcock from bear attacks, it’s a hilarious and inspired take on the traditional music video.

“There’s got to be like an hour and a half of footage there, it’s actually a feature-length movie if you put all the bits together!”

As well as making its own gaming-inspired choose your own music video, PUP have also managed to worm their way into several real, playable, games too.

“We were in Watch Dogs 2, NHL 2015… we jump at the chance. Now, video games are just as cinematic as shows and movies … it’s cool to be a part of video games … growing up they were hugely formative for us.”

Yet it’s not just massive AAA releases that they’ve added their music to. Drawn to gaming’s very own DIY (and very punk-rock) indie dev scene, the band accidentally found themselves making a cameo in one of the weirdest games of 2017.

“Over Twitter, we somehow developed a friendship with the guys working on Dream Daddy, and they just asked us if we could do it and we were like “ well, this sounds really weird… Sure!”

For those not up on their niche dating sims, Dream Daddy is a dad dating game that sees players taking control of a single father as they try to find and date other hot dads. It’s charming, quirky and wonderfully weird.

“[The Twitter reaction] just kind of went insane and people loved it. We’re playing a concert in the game. It’s one of the dates, you take your prospective partner to one of our concerts. Hopefully, that’s a good date!”

Watching them whip a thousand-strong London crowd into a frenzy hours later, it’s hard to think of a better date. As the last notes of DVP build into a glorious crescendo, everyone emerges from the mosh pit cheering and smiling. As Zack rises from his drum stool grinning and covered in sweat, for the first time in my life, I leave a punk show thinking about Mega Man.