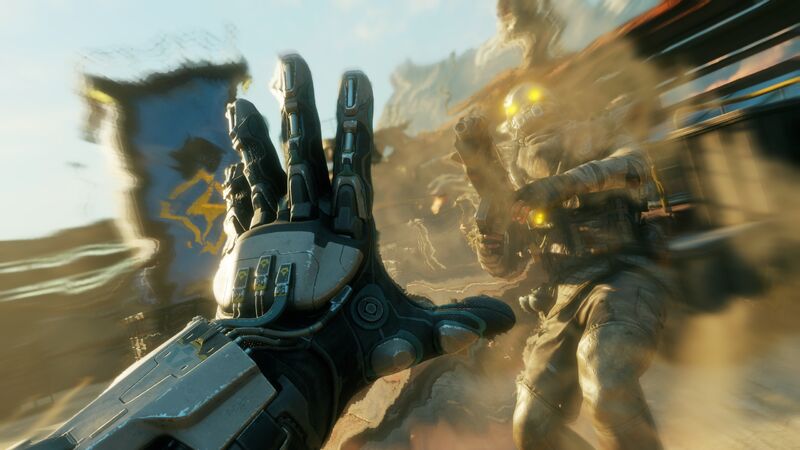 ‘Rage 2’ Offers More than just Fallout From the Borderlands

For all the mainstream acceptance videogames receive in 2019, it’s reassuring to know that there still remains a segment of videogames that are seemingly created with the sole intention of upsetting parents. Sure, mum might have experienced a brief foray into nuanced, mature, cinematic modern gaming via watching Red Dead Redemption 2 over your shoulder this Christmas (take a shot of something alcoholic every time an elder said to you, “eee, aren’t the graphics good now!” and you might not be able to focus on the rest of this preview). But to many, videogames will forever be… well, Carmageddon, basically.

Much more than its predecessor, forthcoming id Software/Avalanche Studios collab Rage 2 is a game built in this mould. The obvious influence is id’s own DOOM. There’s more than a feel of the forever underrated Bulletstorm in both action and aesthetic too. Yes, there’s a story there – a potentially good one, a judgement based on the few hours we’ve had access to, though please don’t ask us for specifics (we were too busy causing mayhem to understand the plot between ‘go here’, ‘do this’). In fact, this being an open world, there are hundreds of stories within which will unveil as you explore the game’s environment. Yet ultimately, this is a game about delivering violent justice to a relentless procession of vaguely similar looking mutants in a variety of excessively brutal ways. And thank god for that.

The game positions you as Walker, last of the rangers, three decades after the end of the first Rage. Nevertheless, just like the first time around, Rage 2 largely asks you to perform a variety of missions that see you shooting lots of things or driving like a maniac. Sometimes even both at the same time. It’s a good job then that the wasteland has evolved significantly since the last time you visited. Barren sands have been replaced by vegetation. There are swamps. Biomes. It’s hardly Rio De Janeiro, but it’s some distance from being Rotherham too. Sometimes during the first game, it was hard to register the detail present within the game’s environment; most likely because the game was more ambitious than the specifications of the last generation of consoles could handle and well, the world was made up of an awful lot of muddy brown.

Our playthrough saw us undertake a mission to increase renown that saw us competing in a dystopian, Running Man-style quiz show called Mutant Bash TV. Refreshingly, Rage 2 presents players with a proper world to explore, whereas its predecessor was more concerned with shuffling you between stitched together set-pieces.

There’re tonnes of tiny details that made us grin during our playthrough. A particular favourite was approaching wasteland survivors and seeing what their names were. ‘Richard’ and ‘Deborah’ aren’t hugely popular in the apocalyptic future it seems. ‘Otter Pocket’, ‘Thunder Rhino’, ‘Grocerie Reminder’ and (our favourite) ‘Keyboardcat.mpeg’ are.

In the new Rage, your character is capable of speech, and there are RPG elements to your gameplay. Not that this is Fallout by any means, but there’s definitely an adventure to be had, with the player tasked with making choices and decisions between all the ultraviolence. Avalanche Studios almost certainly have a pile of dogeared 2000AD comics next to their office toilet, but the detail present in their post-apocalyptic sh**hole – the characters, the creatures, the locale – is enough to elevate it above the generic, making this dirty dystopia a real treat to explore.

And explore you will, with the Stockholm based Avalanche promising that ‘if you can see it, you can drive it’. This doesn’t just mean grounded vehicles either, which is interesting, if not something we saw during our hands-on time. Your core vehicle is The Phoenix, which can be customised and upgraded, though the most fun we had driving in our time within the game was hi-jacking a mutant’s tank and levelling their settlement with a succession of rockets and reckless driving.

One thing that strikes us about this particular apocalypse is that there’s an awful lot of mannequins. Every mutant settlement has one, often more. It appears to be the essential item of home décor in the apocalyptic age. The shopfronts of Gap must have taken helluva looting in those days following the end of civilisation. But enough of that bollocks, let’s talk about killing.

Sadly, this is a year in which Mortal Kombat has a release, otherwise, Rage 2 would probably be the most innovative killing machine around. It still deserves acclaim, mind you, for excelling in creativity when it comes to the ways in which it allows you to dispatch foes. Aside from a really quite visceral thrust push and the big guns that are plentiful in the game (including a shotgun that really is a thing of beauty), there are special attacks that come via your traditional charged mechanic, in this instance, called Overdrive, which fills with each kill you make. When it’s full, you can juggle your enemies with your bullets. You can make people explode. You can even jump, soaring into the air, before slam-dunking a mutant deep into the earth’s core. That was definitely our favourite.

ON A WINGSTICK AND A PRAYER

Fans of the first game will be pleased to hear that Rage’s true MVP – the wingstick – returns, only this time in high def. It’s really quite a lot sharper than we ever envisioned it looking up close. This time around there’s a lock-on mechanic though, meaning you can throw around corners. In fact, everything about Rage 2’s combat mechanics are souped up; the game wants you to have a lot of gonzo, bloody fun. Like a demented little brother, wired on sugar, giggling in the corner of your bedroom, within combat, the game is desperately rooting for you to string together killstreaks. The pleasure it takes in your immaturity and in your perversity is refreshing, and in the heat of the battle, settlement takedowns are actually chaotic, soundtracked at all times – of course – by some excellent clubby cut-n-paste heavy metal.

There’s an awful lot of Rage 2 we haven’t seen, so these are cautious words to be taken as such, but at the time of writing the game is shaping up to be something that looks really quite special. We’re pretty sure that it’s not the regurgitated dog’s dinner it could have been. Even with the split in the game’s development making perfect sense on paper – few are better than id when it comes to creating great FPS experiences, ditto Avalanche and their deft touch at crafting open worlds – the combination of shooting elements, driving, and the RPG flourishes meant that Rage 2 could have felt very uneven. Like it wasn’t one thing or the other. From what we’ve played, that’s not the case. Time will of course tell. At the very least, it’s pretty much guaranteed to be a load of mindless, bloody fun.