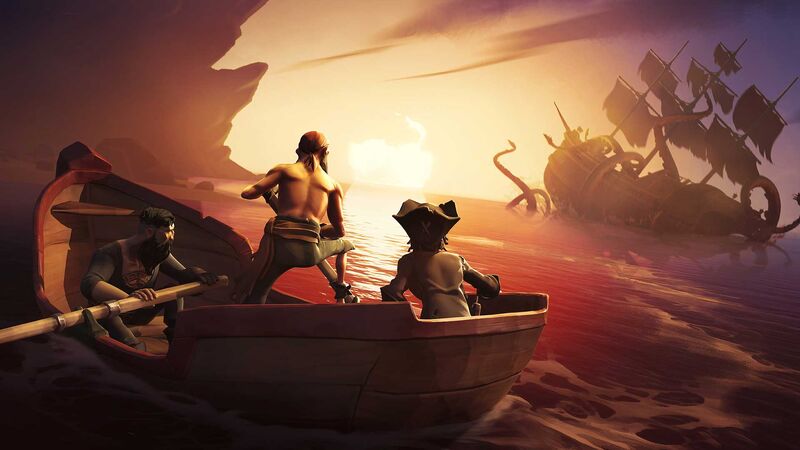 EXCLUSIVE: Rare Reveals All Its Ambitious Plans For ‘Sea Of Thieves’

When it comes to curating a strong lineup of Xbox One exclusives, it’s pretty plain to see that Microsoft has spectacularly dropped the ball over recent years. While Sony has spent the last two generations boldly experimenting with varied new IP like The Last Of Us, Until Dawn and even niche titles like Nier Automata, Xbox owners have largely just been stuck with the tried and tested trio of Forza, Halo and Gears of War.

Thankfully though, there is one bold new Xbox exclusive that has just floated into sight. Developed by one-time Banjo Kazooie and Goldeneye dream team — Rare — Sea Of Thieves is arguably Microsoft’s most ambitious first party game yet. You can read our full review here.

For those who have yet to play it, This playful pirate-themed adventure sees players sailing across a colourful and interconnected online world. With a strong focus on co-op, Sea Of Thieves allows a group of friends to log on and find treasure, take on other players or simply just to go with the wind and embark on their own exciting escapades.

With the game now out and many players feeling concerned over the game’s lack of content, we sat down with Mike Chapman, the design director on Sea of Thieves. Curious to learn what was coming next and how Rare went from creating Kinect mini-game collections to a hugely ambitious pirate-themed MMO, we got the lowdown on how this seadog simulator came to fruition.

‘Sea Of Thieves’ Almost Wasn’t a Pirate Game At All

“When we first had the idea for the game, it wasn’t pirates,” reveals Chapman with a smile. “ The vision for the game was actually just a one-liner — ‘Players creating stories together’.

Despite being big fans of pirates, it was the concept of going on grand adventures with your friends that really inspired Rare to start working on this bold new project. “We knew that this should be a game that’s got co-op at its heart. Somewhere you can just step in and get lost with your friends and have these incredible water-cooler moments after you’ve finished playing.”

In fact, before the team settled on a theme that fit their grand vision, Rare was toying with some very different concepts for their co-op adventure: “We had a huge wall at the studio where we had these one-sheet ideas for what the game could be. And we had some funny things about dinosaurs and vampires and zombies and everything you could possibly imagine. At one point it was even a game about deep-sea salvage, like a game you’d expect Bruce Willis to be in.”

“But then someone mentioned pirates. And we were like, ‘That’s what we want. We want it to be pirates!’”

Initially, Microsoft Had No Idea What Rare Was Working On

Despite Sea Of Thieves now looking like one of Xbox’s most promising exclusives, initially, Rare began working on the game in secret. “When we first started, Microsoft didn’t know about it at all. They’d heard rumours we were working on something that we were really passionate about, and they came in and we gave them the pitch. But then at the end of the pitch, we said, ‘ Now you’re going to go and play it’ and they sat down and were absolutely blown away by it.”

Forget grinding for gear and arbitrary experience gains, for Rare, their goal with Sea Of Thieves was to bring back role-playing in its truest form. Chapman insists that this is a game where the team wants you to really feel like you’re a pirate. For Rare, this has be a game where players feel like they’re truly immersed in the game’s sprawling, swashbuckling world.

“For me, Sea of Thieves is true role-playing. It’s ‘Here’s a world; go play.’ It’s not ‘You’re the canon guy and you’re forever going to be the canon guy, and if you’re not on the canon we’re going to get frustrated with you,’ it’s ‘We’re going to give you a ship, you’ve got a set of tools and you do it yourself.’”

Despite offering players a bit of variety, we ask whether that’s really a true role-playing experience. Chapman pauses and thinks for a moment, before revealing what he really wants to bring to the game: “We’re working on the idea of players being able to become a bounty hunter.”

“[That’s what] we’re looking at at the moment but we’ve got ideas for more as well. You can easily imagine the amount of potential this game has with a pirate world and the players being merchants. That’s something we’re looking at longer term.”

There’s More To Sea Of Thieves Than Just Messing Around

Despite giving players the tools and the freedom to create their own fun in the game, Chapman is keen to stress that he believes there will be enough variety and developer made content to keep the user base invested in Sea Of Thieves.

“What we’re hard at work on adding now is a sense of purpose and progression to the game. Sea of Thieves is not a game where you just create your own fun. It has those elements, but there are quests, there is a structure progression system, we haven’t shown it off yet, but that’s what the game is. It’s not just solely based on player agency.

“Obviously we’ve [shown] a lot of the treasure hunting, but ultimately, there’s going to be other motivations in this world, whether that’s exploration or [other adventures]. Essentially, every player is on a journey to become a pirate legend. Early in development, we decided that we didn’t want to create [NPCs] like Blackbeard. We’ve talked about other quest styles that we’re building at the moment. We want to let players progress in their chosen way, become their own Blackbeard and create their own legend.”

While 2013’s Assassin’s Creed IV: Black Flag offered gamers a serious single-player take on sailing the seven seas, for Chapman, his pirate game had to encompass that thrill of spotting a player-helmed vessel on the horizon.

“At its heart, it’s this cooperative adventure that’s great for just four players, but the magic of it is there’s people doing exactly the same thing as you in that same world. They’re beyond the horizon having their own adventure. that is Sea of Thieves at its heart because if that was AI it would eventually become predictable.

“Players are endlessly creative, so you have no idea what they’re thinking. You’ve no idea whether they’re laying a trap, whether they’re leading you somewhere and they’ve got some friends they’ve allied with and they’re going to attack you. It never gets old. I cried with laughter yesterday playing this game.”

With games like Destiny and Overwatch attempting to ensnare players for the long haul, Rare is keen to make sure that the world of Sea Of Thieves is equally as alluring.

For Chapman, this isn’t just a game that he ships and forgets, he and the team want it to be a constantly evolving role-playing experience. “As I mentioned earlier, there’s so many ideas, quest lines and directions you can go in. I want to keep adding features and supporting [the game]. The more players we have, the more feedback we get, the more data we get from what quest styles are resonating with them, we want to double down on that stuff and make it a game that players want more of.”