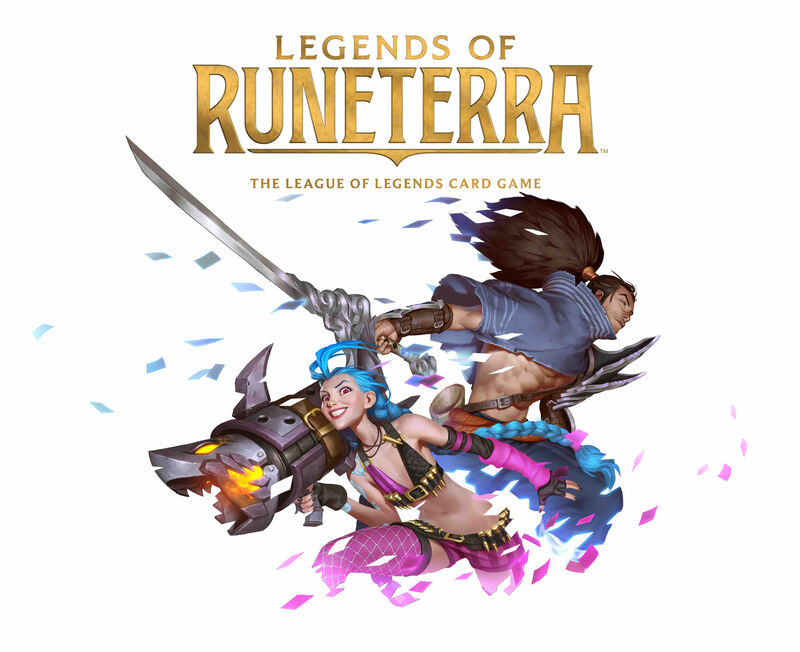 As a surprise to fans during the game’s 10-year-anniversary celebrations, Riot Games has finally revealed their second game — Legends of Runeterra. Taking a cue from rivals Blizzard, this new IP is a digital card game that seeks to expand the world of League of Legends and flip a saturated genre on its head. We recently got the chance to play the game for several hours at Riot’s headquarters in Dublin, speaking to some of its lead developers about their vision for the future of digital card games.

One of the first things made clear at the event was that the developers of Runeterra were noticing the same problems appearing again and again as the ‘card games tied to video game properties’ space has ballooned in years past. “High cost of content, stale metas and shallow deck building” being the crucial issues. The team noticed that “nobody seems interested in finding something better than this,” so they’ve been working away in secret to find ways to send their competitors to the graveyard.

With some fresh ideas, a player base begging for more lore and a unique economical approach, Riot certainly seem poised to activate their trap card. But can Legends of Runeterra really do enough for it to survive in a space ruled by titans like Hearthstone, Magic: The Gathering Arena and Gwent?

Let’s talk gameplay first. Legends of Runeterra uses an Active Round System where players can place cards regardless of whether you’re on offence or defence. You can react when an opponent casts a spell and counter it in the same breath. It feels a lot like a rally in tennis, and feels refreshing compared to the genre’s belated back and forth. There’s also a spell mana meter which is contained in a separate pool to your actual mana. This allows for quick bursts of damage and game-flipping, slow-burn spells that truncate matches.

The first set of 318 cards for Runeterra will include 6 regions and 24 champions. Each region has their strengths and weaknesses and provides a different play style, though crucially, you can combine these regions to create a unique deck with unlikely matchups of League champions.

Yet with only two regions to mix and match with at once, will that shackle the potential for creativity with the available cards? This was one of the first questions we lobbed at our interview subjects, Legends of Runeterra’s Design Director Andrew Yip and Art Director Andrew Silver.

Becoming a Legend of Runeterra

“Often we see players are at their most creative within tight constraints,” Yip tells me. “Our hope is with two regions, it forces players to work within constraints and find solutions that they wouldn’t normally. But at the same time, we have R&D’d a number of different game modes that will allow players to try more combinations than those available in the normal game experience.”

After getting comfortable with some pre-built decks we decided to make our own. Our chosen setup was a mix of cards anchored around adorable poison-spraying demon Teemo and the ephemeral doomsayer Hecarim. It seems we have an affinity for dirty tricks and martyrdom, as ephemeral cards summon legions of fodder to protect our nexus, our life points which become exposed if the opponent breaks our defensive line.

They also deal damage upon death, which enabled some dangerous synergy with Teemo’s special ability, an attack that floods the opposing deck with poisonous mushrooms that explode when they’re drawn into a hand, dealing direct damage to the enemy nexus.

By carefully layering our deck with poison-friendly cards, we could completely sabotage our opponent’s deck and make them lose simply by drawing too many cards or even destroying ours. It was a deliciously evil and refreshing strategy to employ. Stop hitting yourself, and all that.

The most fun we had during our play sessions came from pushing out our prototype deck and making notes mid-session about what cards to drop or add to tweak it until it was unstoppable.

Before we could play multiplayer, we started by working our way through a series of well-written tutorials — that felt more like puzzles grounded in League lore. They coaxed out an inquisitive approach and when we wrapped them up we longed for more. We asked the developers if there were any plans for further single-player content, a natural concern for players like us who aren’t looking to go pro.

To address this, Yip told me that the tool used to make the single-player tutorials is “extensible” and allows the team to make similar content if players latch on to it. “With each expansion, we definitely plan to introduce (the new content) and help players catch up and familiarize themselves via similar experiences. How much more beyond that we take it I think will be dependent on player feedback.”

Every champion in Runeterra can level up, and they have supporting cards within their region that play off of the lore and the way they feel in League of Legends. Jinx, for example, only levels up when your hand is empty, forcing out an aggressive playstyle.

This is part of Riot’s push to connect the gameplay of the MOBA that made them famous with this card-based spinoff.. Certain cards have a back and forth dialogue with each other once they’re in your hand, and mini-narratives start to develop as they level up. This unique social element may be the main factor that helps Legends of Runeterra graft some of that saturated market share.

There are also several oddity cards we found whilst building our deck. Take for example, Cataclysm, where you have to play 20 unique cards to then summon a 30 health 30 defence robot kitten. We spent most of our day trying to make this work, creating a deck with no duplicates.

We later asked design director Andrew Yip about why cards like this exist in the game. He cites the “Commander” playstyle in Magic the Gathering as inspiration, a fan-made multiplayer game mode where the game is built around one central powerful card. “One of our goals is to create a variety of play patterns so that every player kind of can find their own deck. And that’s a great example of a single card that we think compels players to build decks in a really unusual way”

Whilst trawling through the available cards we also found a ‘Doctor Yip’ which bears the likeness of Andrew, albeit with bald hair. A clever in-joke, Yip told us that he didn’t have any input in this particular case. “My team designed it either as a homage to me or to mock me.” When I asked whether he had any discussions with the team about making his likeness overpowered, Yip quipped back “Oh there’s no question, if they want to keep their jobs…” which filled the room with laughter (he later followed up with a definitive “just kidding”)

In regards to the more zany side of League with its absurd, alternate timeline skins, Silver told us that the team has “floated the idea of skins and alternate art forms” for the cards. We then pressed the team on whether we could see cards based on K/DA, ther augmented reality K-pop group made up of League characters. On whether we’ll see them in Legends of Runeterra, Yip told us that “he would love K/DA cards.” The lack of follow-up to the statement lingered in the air, quickly telling us that their true plans were kept under wraps.

Legends of Runeterra won’t offer random packs, and Riot has said that they won’t use this as an excuse not to update the game either. We’re told that there will be frequent content and balance updates, set in a fixed schedule.

They wanted to drive this player-friendly point home. Throughout the day at Riot Dublin, we were bombarded with the fact that Riot prides itself on being “the most player-focused company in the world” to the point where it sounds like every decision made by any developer working on Legends of Runeterra was made through this completely selfless lens. It’s certainly not the worst buzzword in the world, far from it, but it does suck a bit of the joy away from the game when a developer can’t own their decision making and abilities as they should. At one point we joked with another journalist that we should drink every time the spokesperson mentioned it in their closing speech. Let’s just say we’d be quite inebriated.

So how does this supposedly consumer-friendly economy work? Players earn cards by playing through regions, battle-pass adjacent reward trees. The only way to use real money in LOR is the Wildcard system, where you can bypass the grind to pay for particular cards to complete your deck, but there’s no random chance involved. Wildcards can also be earned via the regions trees and there’s a weekly cap.

The most peculiar part of the economy is Vault Day, a weekly ritual for every player. Runeterra’s vaults are declared open and include cards and content which will upgrade in quality as you play more of the game, incentivising players to return on a consistent basis. The vault system happens to be the only random part of the economy, and simulates the joy of opening card packs without having to pay… the methadone of microtransactions, if you will.

The psychology behind this move confused us, especially considering that the game has such a brave anti-microtransaction economy. It’s a good middle ground, but then why would they include a randomised card opening system at all? “We definitely don’t want to avoid the good feelings that come from (opening randomized cards),” Yip told us. Silver later talked about how it ties back to their histories with card games:

“We’ve tried iterations in the past where we had no randomness to card unlock, and what we felt like we missed out on was that excitement of opening up a fresh new pack that so many of us that come from CCG backgrounds really love, right, like it feels really good. So we just wanted to build a system that would bring those good feelings without the bad feelings that come with spending money and not getting what you want.“

A lot of these new ideas will quickly be chewed out and moulded by the community when the game gets into the public eye. Speaking of which, Legends of Runeterra will come to closed beta in Q1 2020 with a ranked queue system to boot. Based on what we’ve played, there’s a lot to love here. Whether greed will eventually get in the way of a good game, however, remains to be seen.

A full launch for the game will then roll out later in the year, with plans for Legends of Runeterra to arrive on mobile devices being revealed in the near future.