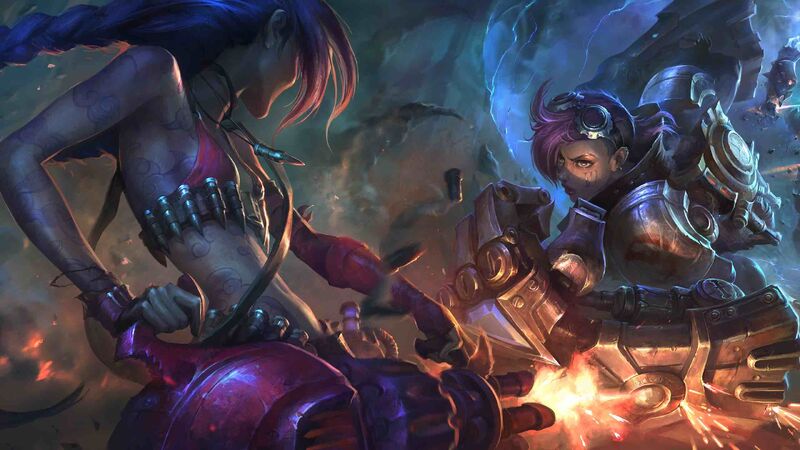 We recently attended an event held at Riot Dublin to preview Legends of Runeterra, Riot’s latest project. Runeterra is a card game based on the world of the companies incredibly popular MOBA, League of Legends, but it isn’t the only game that Riot is working on right now. The company is expanding its development style rapidly and working on multiple other projects, most of which were revealed in brief during our visit.

Late in the agenda, we were carted back down to the main Riot mess hall for some seemingly innocuous closing words. What proceeded was an intense set of surprise reveals, crammed into a 10-minute address.

As part of the League of Legends 10-year-anniversary celebrations, Riot is dumping a bucketload of content onto their player base, including new champions, new platforms for their already established games and some wholly new experiences, experimental strides into markets where Riot has no previous experience.

A League of their own

First off, we had the likely announcement that fan favourite Senna will be arriving in League of Legends. Senna is the wife of beloved champion Lucian, and in the lore,her soul was claimed by the evil Thresh. This will no doubt please fans who recently caught the ‘Dark Passage’ trailer which expanded upon their rivalry.

This was followed up by the news that auto chess titan Teamfight Tactics is coming to mobile in Q1 2020, and will feature crossplay between PC and mobile. Yet, perhaps the more peculiar mobile reveal was that League of Legends: Wild Rift will also be available on mobile devices in 2020, delivering a “true League of Legends experience” in your pocket.

This was previously leaked via a YouTube video, but we got a quick glimpse at how it operates on a mobile device. It looks like an uncompromising MOBA experience on your phone, with touchscreen controls and a naturally very busy UI. Given the intense, quickfire complexity of MOBAs, it will be interesting to see if this one sticks the landing, given the limiting nature of a smartphone touchscreen.

Then came the bold moves. A screenshot from the previously announced League of Legends fighting game was plastered on the screen, with no detail given beyond that it was codenamed ‘Project L’. The screenshot showcased a brawl between Ahri and Darius in the middle of a barren desert, and whilst it was very clearly concept art, it looks like they’re being ambitious with the graphics, shooting for full 3D renders in a modern Street Fighter style.

After that, we got an extremely quick look at Arcane, which is Riot’s in-house animated series which aims to develop the League lore in greater detail. This will complement the trailers and champion reveal clips that fans have enjoyed over the past decade of League. The reveals came thick and fast and details were incredibly scant, so there was not a lot to go off beyond what we could intonate from a quick glimpse.

Of course, Riot saved the best for last! We were finally provided with an incredibly fleeting glimpse of Riot’s Project A, described as a “stylish competitive shooter in which unique character abilities create opportunities for your gunplay to shine.”

Crucially, this is a brand new IP, set outside of the League universe. The game looks like a brave mix of Counter-Strike: Global Offensive and Overwatch. We saw a blink and you’ll miss it GIF of a character with a very serious-looking arsenal of military weapons laying a wind trap on the ground in front of them and using it to launch into the air, activating another ability where they were able to summon and launch a barrage of Kunai toward the remaining enemy while elevated, pinning the poor fellow to the wall.

You can’t say too much about a tiny vertical slice like that, but it looked impressive, like a tight competitive shooter with Dishonored-esque superpowers. It’s also extremely bold for Riot to create a new IP given how strong the League of Legends brand is.

Hopefully, we’ll hear much more about these new projects as Riot scales up their workload and delivers these new experiences to fans in the coming years. With Runeterra and Senna right around the corner, it’s a very exciting time to be a League of Legends fan!