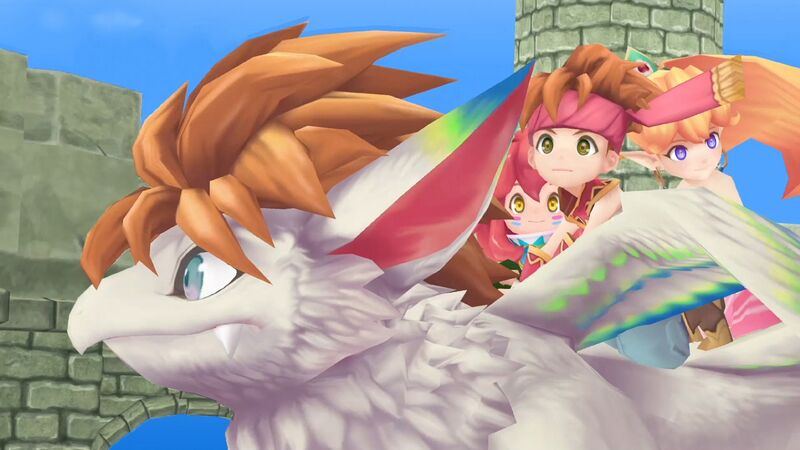 ‘Secret of Mana’ Review: Flammie to the Moon

Having debuted for the Super Nintendo way back in the summer of 1993, becoming an instant favourite of RPG fans around the world, Secret of Mana has long been a contender for the remake treatment. With an official version of Square’s adventure hard to come by on modern hardware, prior to its inclusion on last year’s plug-in-and-play SNES Classic Mini, it made sense for the company now known as Square Enix to revisit one of the jewels of its catalogue, for the benefit of old-timers and newcomers alike.

Secret of Mana 2018 begins much as it did 25 years ago. A black title screen is split horizontally to reveal three diminutive heroes stood before a colossal tree, a flock of tropical birds flying by overhead as the music rises and swells, building the sweetest anticipation for the journey ahead. It’s a fully fleshed orchestral piece now, rather than the synthesised original, but there’s no mistaking this theme for any other game.

Indeed, the 1993 game’s composer Hiroki Kikuta is involved here, as part of a team that also includes Streets of Rage maestro Yuzo Koshiro.

And then you start the game, and it feels like a betrayal. Chunky three-dimensional graphics have taken the place of the exquisite pixel art of the past. The characters – we first meet three, one of whom is about to become the primary protagonist of the game (his name is Randi, brilliant) – exchange moany, Americanised exchanges with all the gravitas of a flannel.

Their mouths don’t move – no attempt at lip synching has been made. The script’s the same, sure, but it never sounded like this in any player’s head.

But take a step back, away from nostalgia-soaked memories and into the present, and the top-down visuals are… fine. Nothing that’s pushing the hardware, even on Vita – take away the HD sharpness and you could mistake this for a PS2 game. But they’re bright, cheerful even, and each main character – unremarkable anime dude Randi is joined by the strong-willed but love-struck Primm and the mischievous sprite Popoi – is instantly recognisable by outline alone, distinct against the array of enemies lining up to get whacked.

The static faces during the cutscenes are weird – but these aren’t so frequent as to be a problem.

Despite the change in aesthetic, there are still nods to the purists here too. In a nice touch, Square has given players the option to switch between the new musical arrangements and the SNES originals, and while it’s perhaps sacrilegious to say so, a few of the new pieces fare better, given greater organic warmth to better reflect the rich melancholy and emotional weight of key scenes.

There’s also the choice between an English or Japanese voiceover – and you should immediately opt for the latter. The Japanese cast give their roles a great deal more life, even if you’re then reliant on subtitles to follow the plot.

Which, unsurprisingly, hasn’t changed. Randi accidentally comes into the possession of a magical sword that, countless years before, helped save the world from destructive Mana Beasts. We begin with the sword’s power weakened, its blade dulled and rusted – and it falls to Randi to restore it, and by doing so stopping a whole bunch of new bad stuff from happening.

He travels the world with Popoi and Primm – both of whom can be controlled by couch co-op pals (or left to some occasionally ropey AI) – taking out monsters in real-time combat and conversing with all manner of weird and wonderful beings. Truthfully, it’s a delight of an interactive fairy tale. You even get your own dragon, Flammie, to fly around on.

Divisive aesthetics aside, where this new Mana really falls down, along with the terrible English dub, is in its inventory management. Each character has their own radial menu, to access equipment, stats, magic and more. And you’ll be accessing them a lot over the course of what’s about a 20-hour game.

But whereas the 16-bit SNES version had these wheels appear atop the relevant character, the remake puts them smack bang in the middle of the screen, regardless of where the trio is standing. And that might not sound like much of a pain – but in practice, it means frequently bringing up the wrong set of magic for the boss at hand.

More annoying still is the wheel on each character’s equipment screen. It displays icons to represent each piece of gear, covering head, arms and torso (note that your on-screen avatars never change their appearance, but their stats increase when better protection is worn).

But the cursor defaults to a trash can icon – and clicking on this by accident and then selecting a piece of equipment to wear it will actually permanently delete it, without a pop-up to ask if you’re really sure you want to chuck away the expensive armour you just bought. That’s sloppy, lazy design, and you’ll likely bin a couple of important helmets over the course of your quest.

Two improvements over the 1993 game are an auto-save feature – essential for a handful of cheap bosses, returning your party to a short stroll to the enemy rather than a hefty trek away, respawning at the nearest inn – and a game log that provides pointers for where to head to next. It’s not always the most reliable guide, but the log will at least refresh the player’s memory when they’ve been away from the game a while.

No anytime-accessible world map is a headache, too – there’s a pointlessly tiny one as part of the log, but you don’t get an interactive one, and as a result a sense of this world’s scale, until you’re riding Flammie. It’d be nice to know, earlier, exactly how these many and varied terrains border each other – SNES players had the advantage of a fold-out paper map from the start.

Also, it’s easy to get lost while directing Flammie, as you can’t bring up your game log in mid-air – meaning you have to land to remind yourself of the rough direction to head in.

Is ‘Secret of Mana’ Any Good?

Nostalgia purists wanting to play Secret of Mana in 2018 are recommended to pick up a SNES Mini and enjoy the original in glorious HD. There’s not enough in the way of improvements in this remake to warrant the attention of the old guard.

Absolute beginners to this title, however, shouldn’t be put off by the groaning of grey-haired grumps, as this remains a terrific action RPG, possessing some still-shockingly dark narrative turns. Best not to get attached to some of these characters, is all we’re saying.

Underneath the hood, this is basically the game it always was, down to the Lullabuds getting whacked, Randi regularly spacing out, and Santa (yes, Santa!) putting in a memorable cameo. And it’s a great game, really, albeit one damaged by some questionable, but far from fatal, design decisions for this remake. Get past those though, and a memorable adventure awaits.