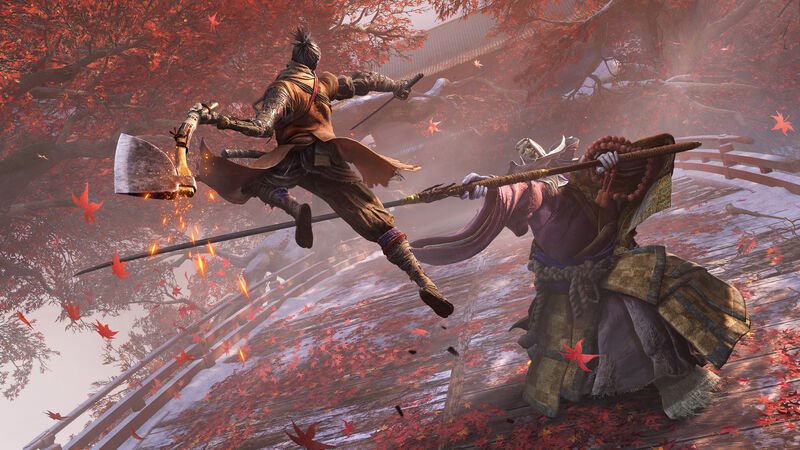 ‘Sekiro: Shadows Die Twice’ Review: Git Gud, Or Your Friends Get It

Earlier this year I visited Japan for the first time, and during my trip wandered around the Imperial Gardens in Tokyo. Whilst there, I was struck by the gorgeous, meticulously detailed architecture. None of it looked remotely real, a rural spot of paradise within a distinctly urban city. This feeling was so strong that I tweeted about how certain snaps could be screenshots of From Software’s latest game, Sekiro: Shadows Die Twice.

So when I first booted up the game, sure enough, there was the deja vu, but something was wrong. Whilst the beautiful pagodas and forestry were there, the serene cherry blossoms were nowhere to be seen. The helpful locals and calm gardeners puttering about the place were replaced by demonic roosters and drunken ogres, their hair slick with sweat, wielding inexplicable swords. There was that other thing too. I couldn’t find the gate back to urban civilisation.

I was trapped in this purgatory until I broke the posture of these foes and surpassed them. Hours would pass and I’d still be conquering that same small area, tiptoeing over rooftops, bouncing on trees fluffy with snow, carefully dispatching my foes with clinical stealth, only to be caught off guard by a plucky grunt sweeping my leg and spearing my chest. This leaves me adrift in limbo, forcing a choice between resurrection and death — and neither are without compromise.

This compromise is the key to what makes Sekiro so special. Here, when you die — you take your friends with you. Core to the game is a disease, Dragonrot, that infects the people you meet every time you fall foul to a samurai sword, or an undying centipede.

Dragonrot serves as an evolution of the heartless masochism you’re used to in games like Dark Souls and Bloodborne. When the one-armed wolf protagonist succumbs to his wounds, you can opt to rely on the dragon blood latent in the world to give you an essential resurrection that can turn the tide of battle.

Take the risk and fail, and when you wake up, you may receive an item known as Rot Essence, tagged with the name of an NPC you’ve become acquainted with in your travels. Maybe they gave you a vital item and you feel as if you’re in their debt. Perhaps they provide a vital service that you don’t think you could beat the game without. Sometimes, you just regard them as friends who you wouldn’t like to see hurt.

Every failure scars them, which is the stunning linchpin that propelled me forward in Sekiro. I finally had something to fight for. At points, I felt sick to my stomach with worry about what was going to happen to my friends if I kept falling to a difficult boss. It makes you hurt more than usual by putting skin in the game. Yet, the beauty is that this feature pushes you to be better. No longer can you rely on cheesy weapons or putting all of your points into vitality to push your way through encounters.

REINVENTING THE WHEEL (TO RUN MYSELF OVER)

You need to learn the rules, which are predictably hard (but fair). But when you finally do start to click with the game’s sadistic systems, you’ll be scratching that ‘just one more go’ itch until it’s red and raw.

From Software games have always held their beauty in the particular details of the environments and characters you interact with, and thanks to Sekiro’s punishing difficulty, players actually have to study these intricacies in order to succeed. Only the most dastardly foes reward the player with Prayer Beads, of which you need four to upgrade your health. This means that unlike in Dark Souls, farming the grunts is simply not going to cut it here.

In other words, Sekiro wants to throw you in at the deep end so that you can learn to be strong. Figuring out the bosses (of which there are plenty,) I felt like a pioneer mapping out and manipulating stealth routes to my advantage, rather than relying on dodgy A.I to get ahead.

The newfound verticality introduced via the grappling hook means you also have to consider the environment around you, and how you can use it to get an edge on your opponents. This is a completely new dynamic that has the unintended consequence of making the player feel far more acquainted and connected with the gorgeous world they’re stumbling through.

Shimmying along Shoji panels as fresh corpses lay in wake around you. Stringing together death-defying grapples to escape the fangs of a giant serpent. Set pieces like this have simply never existed in a Soulsborne title before, and they allow for one of the most satisfying blends of stealth and action to ever grace the medium.

There’s one pretty major omission that fans have come to expect from From Software games — online integration. Yet, it’s a risk that’s more than paid off.  Dropping the always-online open world has clearly given the team more breathing room to carve out areas and encounters that resonate with a single player properly. The architecture of Dark Souls 3 is a blur to me, and Bloodborne’s Victorian palate blends into one canvas before the late-game switch. Sekiro doesn’t settle for that, and this turns unassuming areas into colourful, memorable hotspots that will no doubt go on to haunt players dreams.

It’s a vibrant love letter to Feudal Japan, but the enigma of the Souls series still persists in dank caves and supernatural religious processions.

The other big shift here is in the scope of the environments. You may be sceptical of it, but truly, the deceptive linearity of Sekiro is actually its greatest strength. Miyazaki and his team have applied the same diligent environment design they’re known for in Sekiro. This ramps up the adrenaline without sacrificing the joy of discovery, the sheer boundary-prodding genius that turned Dark Souls into one of the most successful series of the past ten years. You can and should go back through the game in an almost roguelike fashion to level up if you’re struggling, as death cuts your money and experience gained towards skill points in half.

Tusken raider-style enemies lurk with devastating rifles in a sunken valley, guarding the entrance to what can only be referred to as Buddhist Blighttown. Hordes of monkeys rage against you in a thick bamboo forest, obfuscating your route to safety. Anything can and will kill you in Sekiro. Bloodborne had compromises in this regard, but Sekiro does not, thanks to the Posture system that makes it so far removed from anything you’ve played before.

Simply put, there is no stamina system, and enemies need to be fatigued first to be killed via deflections or dodging. It’s a genius revolution that tests the mettle of even the most hardcore of Soulsborne players. It doesn’t matter if you’ve got the platinum trophy in every game so far, this game is going to kick your ass whether you like it or not.

Bosses alone will take hours of your time to master, and thank god for the pause system so you can get your faculties in check when the adrenaline starts coursing through your body, forcing you to make silly mistakes. It feels more like dancing than combat, the fluidity of battle breathing life into the old bones of Souls combat.

The protagonist Wolf is also voiced and has dialogue options, which feels like it should be a massive point of contention, but it’s all grafted in with so much care that you don’t really end up noticing it? The story putters along with meaning, but the emphasis is still on exploration. It’s a tremendously difficult line to straddle, but Sekiro manages it with flair.

It is the best SoulsBorne game since the original Dark Souls, a tremendous victory lap for the genre that pushes the series in a fascinating direction, revitalizing its most stale features and introducing bold new ones.

With the original Dark Souls, the mystery of it was certainly its greatest feature. We didn’t even have a name for games of this style, and Sekiro rewrites the rules so you feel just as lost as those first stumbling excursions from Firelink Shrine. After this, I want Souls to become a framework for From Software to try out multiple time periods and aesthetics that they’re interested in. As long as they keep moulding the formula in meaningful ways whilst delivering the same core experience, it feels like they can’t go wrong.

Sekiro is an electrifying power trip that demands a lot from the player, but if you let it grip you it will be hard to pull its rickety wooden hand from your wrist. Every time I put words to paper I’m emboldened once more to head back in there. I’m inspired and terrified thinking about the friends I’ve made, bereft with Rot Essence, praying for me to surpass the next fork in the road so I can bring them back to life.