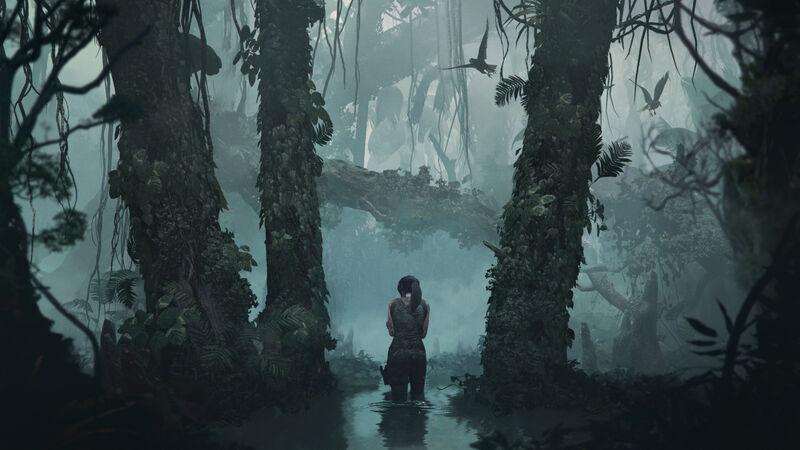 April 27th, 2018. That was the exact moment that anticipation for Shadow Of The Tomb Raider – the third and final instalment in Eidos Montréal’s rebooted origin trilogy – shifted to disappointment. It was strange to see. The previews that landed that morning were based on an hour of gameplay that was solid if not spectacular, while the criticism levied at what bit of the new game had been sampled could be best distilled to ‘well, it’s just more of that same’.

This was an odd criticism of the final game within a franchise that had been preceded by two incredible, franchise reviving titles. ‘Yes please’ would have been a more fitting reaction…

“We weren’t surprised by the response,” says Jason Dozois, Shadow Of The Tomb Raider Narrative Director, with a smile. “At the start of development, we plot out everything at a high level – what are all the beats, what are all the levels, what happens in each section – and the beginning of the new game was intentionally evoking [previous instalment, 2015’s] Rise Of The Tomb Raider. We wanted to say to new people coming onboard, okay here’s what you need to know to play this game, and for the people who’ve followed through the series so far, we wanted to tease some of the new mechanics. There’s a little bit of rappel. There’s a little bit of swimming. Here’s a tomb, a challenge tomb but on the main path. And then we’re at the jungle. And, by the time you’re at the jungle, it’s a very different game.”

No argument there. Relocating Lara and Jonah from Mexico’s Day Of The Dead festival to the dense jungles of Peru, via a crashed aircraft – after the flood of the first segment, the second disaster to befall Lara’s impetuousness – the lush, green, very much alive  world of the jungle couldn’t feel further away from the all-encompassing misery of Yamatai or the bleakness of Siberia. You start to run through the ferns and a pair of resplendent quetzals (the species of bird’s actual name, FANDOM hasn’t suddenly become a bird fancier) soars from the undergrowth.

You ascend a tree and you’re greeted by a family of howler monkeys. On the jungle floor scuttle honking capybara. And, in time, there’ll be an epic showdown with the King Of The (Tropical) Jungle; the jaguar. Shadow Of The Tomb Raider’s rainforest is a contender for gaming’s most visually lush environment. And yet the changes in the series are far from just tonal.

“We wanted to make the jungle an environment the player could feel lost in,” says Jason. “We wanted depth, we wanted the player to feel emotion, we wanted them to feel like they were there. That’s a very artistic thing, not really a science thing, so it was difficult to get the sweet spot. There’s a shot after the plane crash, with all the fog… that took a long time to do. The thing with emotion, is that there’s no way of knowing if it’s right until it feels right. Which is exactly what we felt when we first introduced the jaguar…”

“We wanted the jaguar scene to be a lightbulb moment for Lara,” continues Heath Smith, Lead Game Designer. “We wanted that moment to represent how Lara is going to have to become like the jaguar to survive what’s going to happen next. She didn’t come prepared for the jungle. She came prepared for Mexico, so there’s a huge part of the game that’s about adapting. If you notice what the jaguar is doing when you’re in combat with it, it’s running away, then attacking you, then stalking you through the undergrowth. That’s exactly what we want you to do to survive the jungle. It’s not like being in Siberia where you have to get out your automatic weapons.”

So far so Metal Gear Forest, and yet playing Lara this way is extremely fun. Well if by fun, you mean nerve-shredding, lying face first in a pool of armadillo s**t, trying not to make a sound as Trinity soldiers plot all around you, waiting, and waiting, for the moment you can put your pickaxe in their neck. Incidentally, there’s a scene early on when Lara is reunited with her pick axe, after not being with it for a decent length segment of the game. Within this section, you have no weapons. It’s almost survival horror but with a Tomb Raider twist. And then you find it. If any singletons are looking for the secret to long-term love, we suggest you find someone who looks at you like Lara Croft looks at her pick axe.

There’s another very significant development in what distinguishes Shadow Of The Tomb Raider from the previous games in the story arc, and that’s that this installation is more concerned with people than any Tomb Raider game prior. Traditionally, Tomb Raider didn’t really do people. Part of the reason why the original games were so original, so era-defining, was that huge sections of the games were spent with you and you alone, in a cave; no-one to talk to, no-one to help. It felt different.

That original trait became eroded as further games in the series arrived; now it’s preserved within the games Challenge Tomb segments, if not the main story. But this one? At various points, there are people everywhere. Jason explains why…

“Looking at archaeology, the modern view is quite different from when Tomb Raider arrived on the scene. In the past, archaeology was ‘go somewhere, blow it up, grab some stuff, put it in a museum’. Now it’s more about preserving culture, and that means people, that means language. Archaeology is alive, it’s not an engraving on a wall. We wanted to represent that. It’s why [legendary lost Inca city] Paititi is so central to the game, which is a huge hub for the player to explore and try to understand the culture of the place. And so, within that, you’ve also got Lara learning how to interact with other people – as you say, she’s been so isolated – and that journey, so there’s an anthropological thing going on too.”

How’s Shadow Of The Tomb Raider Shaping Up?

Five hours of gameplay in, we can confidentially say that Shadow Of The Tomb Raider is a game that moves the franchise further on, while at the same time, proving satisfying to anyone who has been invested in Eidos Montréal’s origin story from the start.

Few trilogies have been this well written, have had characters so roundly developed; if you don’t smirk at the juncture Jonah has a date and Lara plays gooseberry, or feel something that hurts a little inside when the two of them discuss their late parents, then check your pulse, as the old cliché goes.

Before this trilogy started, gaming’s most iconic character that isn’t a hedgehog or an Italian plumber, was on the bench. Now she’s fully revived. It feels like she can now go anywhere, do anything. With the trilogy coming to a close, what’s next?

“We’ve ended more-or-less where we always wanted to end,” says Jason. “Specifics always change because technology changes, there are other factors too. But the idea of starting as a teenager, reconciling her place within the Croft family, to ending as an adult, in charge of her own destiny, was always the plan. Lara’s a very durable character. She so iconic. You can do lots of different things with her. You can do Guardians Of Light, a more cartoony style, or you can do the kind of games we’ve done, you can take her in so many directions. What’s next? Let’s see…”