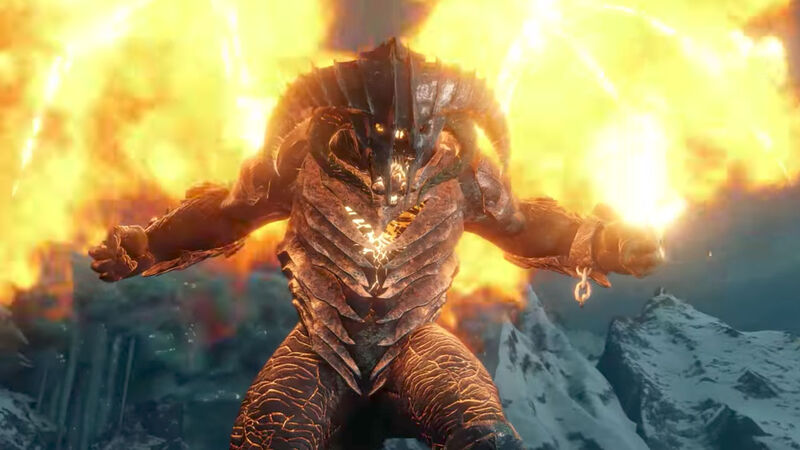 Fighting a Balrog in ‘Middle-Earth: Shadow of War’

SPOILER ALERT: Warning, this article contains spoilers from the balrog fight in Middle-earth: Shadow of War. Proceed at your own risk.

At the recent EB Expo in Surfer’s Paradise, Monolith was showing off a full build of Shadow of War with save files at about 30 hours into the game. Everyone who came up to the booth was dumped into the middle of the open world, with a few paths available. There was a fortress to conquer, a nazgûl to hunt, and a million things in between.

I choose the balrog.

This story mission involves a group of orcs trying to summon a balrog from deep in the earth, but I had trouble before I even fought the real menace. I avoid a patrol of caragor riders by hiding in some tall grass. Hopefully they wouldn’t be back too soon.

The summoners are on tall towers calling forth the balrog Tar Goroth from the pit below. Knocking the first summoner off his perch is easy, but it alerts a nearby orc master to my presence.

It turns out this isn’t your average captain. Dressed like a necromancer, this orc has some very specific dialogue about previous events in the series — apparently Talion‘s actions around the One Ring made it very easy to summon a balrog. Go figure.

The captain isn’t easy to kill. Not only can he step under my swings in perfectly choreographed dodges, he can also smoke bomb away to gain distance and throw his spears. My sword hits either air or smoke.

This drawn out confrontation leads to that caragor patrol finding us. Halfway through swinging at the captain, an off-screen caragor pounces on me and triggers a quick-time event to avoid its gnashing teeth.

This was my first lesson that even when you’re on a mission, the open world continues around you. Patrols, roamers and in-fighting from grunts to feuding warlords will never cease. Every time you pop up, orcs will raise an eyebrow towards the terrorist wraith they’ve all heard about.

In the end, I manage to build up my Wrath meter enough on the minions to do execution attacks on the captain, which slowly bringsdown his health.

The captain retreats, no doubt to take part in the story later, and I climb atop all the summoning towers to kick orcs to their death.

I’m too late to stop the summoning, of course. Tar Goroth emerges from the fiery pit. Even this most evil cabal of orcs, who themselves would make other orcs afraid, go slack-jawed in an expression their faces have never made before.

The balrog kills them instantly.

This is one of the most feared and ancient powers in Middle-earth. Even Celebrimbor wouldn’t stand a chance. In the words of Gandalf, “This foe is beyond any of you.”

So how do we fight it? The same way we best any challenge in the new Middle-earth series: With help.

Talion and Celebrimbor have a new ally named Carnán, a nature spirit capable of taking the form of any beast in Mordor. In this situation, Carnán wears the skin of a sizeable graug. It goes toe-to-toe with the Balrog while I fire charged arrow shots into the exposed areas of the balrog’s back.

Eventually, the balrog decides it wants out of this pit, which means I need to ride the graug and chase it.

Not quite out of the pit yet, we catch up with the balrog and start a game of punch-for-punch. Our graug’s punches are trailed by a blue haze as the wraith Celebrimbor lends his strength to every blow. Talion controls the movements, helping Carnán avoid Tar Goroth’s fists like Mayweather.

Although they are of similar size in-game, individually this graug would be hammered by the balrog. We last this long in the fight because of these epic forces lending their power and intelligence. After a few dodges and counterpunches, we seem to be doing some damage. Or at least making it angry.

In the end, it’s still not enough. As Tar Goroth gains higher ground, we try to climb up after it. It grabs our graug’s head as it tries to pull itself over the edge, looks into its eyes, and crushes its skull.

Apparently not concerned with making sure Talion and Celebrimbor area dealt with, it then prances away into Mordor as if it’s the biggest bully that just got released into the kids’ playground. And it is.

I’m assured by the producer that definitely won’t be the last we see of it, as Carnán turns into a drake to fly away.

This wasn’t the usual choreographed combat of Shadow of War. It was more reliant on scripted sequences, quicktime events, and linear story. As we fight the other ancient menaces of Middle-earth such as ringwraiths, Shelob, and even Sauron, Monolith has said these are the opportunities it’s using to try out new ideas and scenarios for combat.

This wasn’t the most mechanically interesting encounter in Shadow of War, but it’s interesting because it’s a balrog. And being a balrog, it kind of has to be a frantic encounter with unusual combat systems. We were never going to be able to “Press X to win” vs Tar Goroth —  but I look forward to pushing ahead and hunting it down.