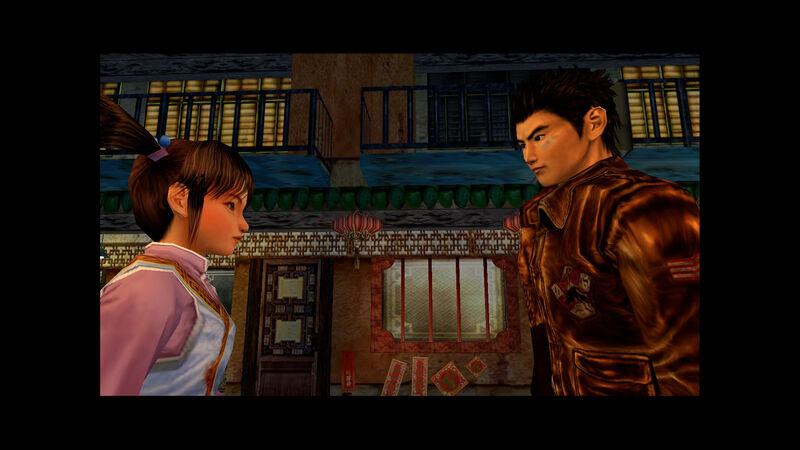 ‘Shenmue I’ & ‘II’ Review: Forklifts, Fighting and Fantasy? I See…

The dogs of Dobuita bark just as incessantly as they did in 1999, when Shenmue first came out for the SEGA Dreamcast. When the hounds aren’t yapping, birds are loudly cawing, scooters are revving their high-pitched engines through the narrow small-town streets, and a tiny kitten is announcing its hunger from inside a small cardboard box, in the shadow of the local shrine.

Everything is in its right place, then, in 2018’s Shenmue – which will be a treat for previous fans and preservationists, but could leave newcomers feeling a little underwhelmed.

If you’re picking up this HD version of Shenmue and its 2001-released sequel having already experienced them on their original platforms, be prepared for a straight re-run of those 1980s-set adventures, with very few new features.

The games now include both the English and Japanese dubs as standard; and the menus – which you’ll be using a lot – have been tidied up. The lightest lick of paint has been applied, sharpening everything to best suit modern screens, but these visuals are akin to running an original Xbox disc on an Xbox One X – upscaled, certainly, but using the same, two-decades-old assets. Which is to say: don’t expect the detailed textures of today’s many proper remasters.

Gameplay – which is divided into go-wherever exploration, high-kicking combat and ever-divisive quick-time events (which increase in length in the sequel) – is widescreen throughout, but cutscenes are served sandwiched between vertical black bars, a hangover from Shenmue being developed for the dominant 4:3 TVs of the late 1990s.

Comparably archaic is the pace of the games, which will feel positively glacial for anyone used to being able to charge through conversations and cut straight to the action. Even when the dialogue is hitting its key story beats, it does so at a crawl, the drama almost completely shattered by emotionless voice acting.

Faithful to a Fault

Director Yu Suzuki wanted these games to offer elements of life simulation alongside their sometimes-riveting muddle of teenage tribulations delivered with a mystical twist, and they sure provide their share of the mundane. Our young martial artist protagonist Ryo Hazuki is required to be in bed by a certain time, wait for a bus that runs to its own timetable rather than the player’s, and must take menial jobs to raise the money needed to progress his story, most notoriously running a forklift around the local docks.

Even if the above isn’t doing it for you, you’re advised to at least give the revived Shenmue a chance. Its reputation – as a foundational open-world release, a necessary precursor to SEGA’s celebrated Yakuza series, or the pioneer of the QTE (for better or worse) – positively warrants it. But be warned that these new versions of Suzuki’s games are faithful to a fault – even down to a Dreamcast version frame-rate dip happening at the exact same part of the first game’s Dobuita setting.

Arrive with modest expectations, then, and Shenmue can still delight. Its environments, while impenetrably blurry in places, naturally arouse curiosity and encourage discovery. And the streets of the first game become familiar very quickly, which is essential for following up leads and chasing down important, mission-furthering characters.

For the sequel, which moves from rural Japan to the urban playground of a Hong Kong spread out over several bustling hubs, maps are essential for the first few hours. But stick with the city’s somewhat cut-and-paste high-rises and grotty alleys long enough, and navigation is almost as effortless as the game’s predecessor, with unique buildings and businesses becoming useful waypoints. You can even add a series of ‘X’s to your map, to mark key locations.

And you’re going to be seeing a lot of those sights several times, revisiting apartment blocks and convenience stores in both games – both in pursuit of Ryo’s main quest, to track down his father’s killer (via some magnificent mumbo-jumbo about magic mirrors – don’t worry, it all kind of hangs together), and to simply cut loose and have some fun.

Both Shenmue and its sequel feature distractions to occupy his time – and eat up loose change – when he’s not practising jujitsu or grilling NPCs for clues. These include some classic SEGA arcade cabs like Space Harrier in the first game and OutRun in the second, darts and billiards, countless capsule toys to collect and, um, duck racing.

Yes, really. Duck racing. In the sequel, Ryo can meet a fellow Japanese teen who will introduce him to the questionable thrill of betting on waddling poultry. It’s better than hanging out at cock fights, we suppose. (Which is actually something you can do in another Hong Kong-set game, Sleeping Dogs.)

This kind of do-anything freedom felt amazing back in 1999 – and while open-world titles have evolved to give players greater mini-game variety, there’s no denying that both Shenmues, if taken at a leisurely pace, can be really pleasant places to just fool around in for a while.

However, there is a timer ticking away in the background of both, so be aware of that as you’re wasting days registering Hang-On high scores. Fail to finish the first game by mid-April 1987 on the in-game calendar, or the second by the end of June the same year, and you’ll get the bad endings. (Pro-tip: do not get the bad endings.)

To return to the earlier point of these games being, basically, the originals ported to modern platforms with nothing much of note updated, this means that Ryo still walks and runs awkwardly – not quite tank-like, as in an early Resident Evil, but stuck somewhere between that approach and the more fluid third-person affairs we enjoy today. His turning circle is also painfully wide. The right stick only moves the camera so much – it’s impossible to do a 360-degree sweep around our hero – and having the face button controls change their functions between games is just madness.

Play through the first game, which will take a good 20 hours, and proceed straight to the second and, oh. You know that button that used to open doors? Well, now it doesn’t. And now you’re stuck with said function tied to the same button that opens your diary, so you’d best look forward to seeing those pages when trying to step outside. It’s a small annoyance, true, but it’s one of many in a couple of games filled with them.

But then, Shenmue wouldn’t be Shenmue if it wasn’t just a tiny bit broken, fiddly where it needn’t be, with Ryo labouring through conversations that feel like they’re moving backwards. It’s all part of the authentic experience – and this HD set delivers, capably, in that respect. They’re no classics by today’s standards, of course, and will leave many a player seeing them for the first time cold – but these games do offer more than mere nostalgia.

Are These Games Any Good?

Shenmue innovated in enigmatic ways that remain inspirational for today’s game designers. These games exude an unlikely warmth that maintains even when Ryo’s jumped by bad guys, clips his hand through a piece of scenery to buy a new toy, or is made to haul crates across dockyards opposite a grunting co-worker.

They’re titles that everyone should play to see (in the same game, no less) how this medium grew from short-burst coin-ops to something more expansive, grounded and mature, and onto the multifaceted, enveloping open-world experiences we love so much today.