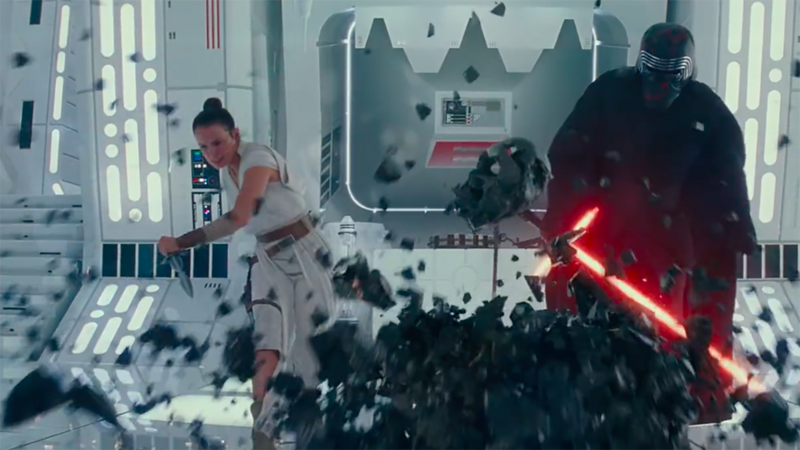 Spoilers for Star Wars: The Rise of Skywalker follow.

One of the fun idiosyncrasies of Star Wars is the cobbled-together nature of it. For example, if you’ve participated in any part of Star Wars in the last two decades, you probably noticed that while the humans that populate that galaxy speak English, their written language is known as Aurebesh. The alien script can be seen in the prequel trilogy, the sequel trilogy, the entire run of all three canon animated series, the comics, and even the theme parks. But the language wasn’t in the original trilogy upon its release (though the DVD release, and the versions since, including on Disney+, retroactively added it for the tractor beam controls on the Death Star in Episode IV). So where did it come from?

Aurebesh was created specifically for the Star Wars Miniatures Battles game, a table-top collectible game similar to Warhammer 40,000. From there it was off to the races until Aurebesh was the omnipresent entity we know and love today, concealing messages with a rudimentary alphabet replacement code.

But the galaxy is a big place, and other languages naturally exist. But none as new or frustrating as the Old Tongue. First introduced in the final season of Star Wars: The Clone Wars, the Old Tongue covered the tomb of Darth Bane. Ancient beyond measure, at the time one could easily assume it was a one-and-done deal meant to further emphasize the mysterious nature of the only Sith to survived the Jedi-Sith War a millennia ago.

Then it popped up again in Star Wars Rebels multiple times. First on Malachor in the Sith Temple where Ahsoka Tano fought Darth Vader. In fact, it was Ahsoka who first identified the runes as the “Old Tongue.” The mysterious language might have simply become the ancient Sith version of Aurebesh, but then it popped up in a later season Rebels, this time in a Jedi Temple on Lothal. Now it could be read as a language so old it pre-dates the rift between the Jedi and the Sith.

This theory was further solidified with the recent EA game, Star Wars: Jedi: Fallen Order was released. In the promo art, Cal Kestis’ lightsaber sits in the center of intersecting circles etched into stone. The ancient carvings are full of Old Tongue script.

At this point, I became convinced Lucasfilm knew what these glyphs meant. That somewhere out there, a Rosetta Stone would translate the Old Tongue into English, much like Aurebesh. So I went digging, despite a complete lack of information on the official Wookiepedia page. My search led me down a rabbit hole that spit me out in Galaxy’s Edge at Disneyland and Walt Disney World.

Inside a single shop in the Disney Park area — Dok-Ondar’s Den of Antiquities — you can buy a very specific journal. The Jedi Journal is full of blank pages for you to write whatever you want. But inside the front cover is what I had been searching for: a Rosetta Stone of the Old Tongue. To my knowledge, this is the only location it has been officially released.

I immediately set out to discover what secrets the likes of Darth Bane’s tomb and the Lothal Jedi Temple held. Turns out, none. The older versions of the Old Tongue don’t appear to have been codified yet, with some of the glyphs upside-down or mirror-images of themselves. All of it was gibberish, even the Fallen Order promo art.  But then the Star Wars: The Rise of Skywalker: The Visual Dictionary came out and all my obsession finally came to fruition. For inside the pages of that book is the script written on the dagger Rey finds. And what it says is very interesting.

I’m not going to lie; when I first started translating and got the word “Isaiwinorra” I was convinced that yet again Lucasfilm never intended this to be translated. But I persisted, and boy am I glad I did since clearly, it was. We might only currently recognize the last three words: Exegol is the name of the planet Palpatine was hiding on, while Eternal One seemingly references Palpatine himself on this ancient-as-hell dagger.

Of course, now the question becomes what are those other three words? None of them appear anywhere in Star Wars as of this writing, neither in the new official canon or the expunged Legends lore. Google doesn’t even know what I’m talking about when I plug in Isaiwinorra, Hoyaruts, or Isharii. They could be planets. They could be interstellar bodies. They could be long-forgotten cultures. Or titles. Or any other number of things. But they are definitely something.

I can’t wait to find out what.

I’ve got no excuse for confusing “Isharii” with “Itharii,” though either way, I can’t find any reference to it… yet. But it’s definitely “Itharii.” My apologies!

The first two words make way more sense as Wookiepedia has an entry for a very similar phrase: “Tsaiwinokka Hoyakut.” It was an ancient Sith spell that could raise the “freshly” dead. While it appeared in Legends lore, the spell itself currently resides in a nebulous place between the defunct EU and the Disney canon, as it was introduced in the Book of the Sith: Secrets of the Dark Side. Published a scant eight months before the Lucasfilm merger with Disney, the book has since been re-released twice. Is it canon or is it not? Don’t worry, as of this writing, I have ordered the book to search for the final untranslated word: “Itharri.”

I have my suspicions, however, as the original name for the leader of the Sith Eternal, per the same book, was the “Sith’ari.” That would have the dagger translate roughly to “Reanimated the dead Sith Overlord on Exegol. He is the Eternal One.”