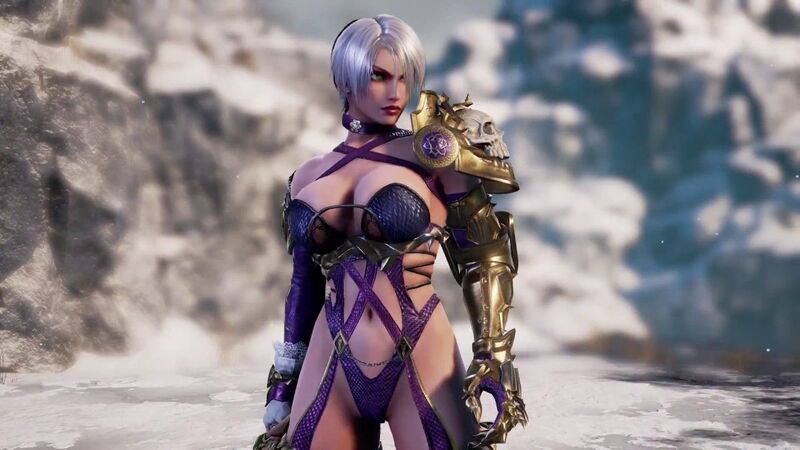 ‘SoulCalibur VI’ Plays Well, But Its Female Character Design Lets it Down

For gamers of a certain age, the SoulCalibur series holds an almost weaponised degree of reverence. Given its sword-slinging combat, there’s no small trace of irony in that fact. Yet, with last year’s Tekken 7 raising the bar pretty spectacularly for 3D fighters, we were surprised to find that SoulCalibur’s combat still feels just as sharp as it did two decades ago.

Yet, where SoulCalibur VI‘s mechanics and presentation feel thoroughly modern and fresh,  its representation of women is still disappointingly stuck in the past.

A Higher Calibur of Fighting Game

While Tekken may be the PlayStation fighter that most 90s kids remember, SoulCalibur was always its cooler and better-looking cousin. Boasting suspiciously smooth-looking visuals, eye-brow raising (but highly memorable) characters and a deep yet intuitive combat system, this historical beat ‘em up instantly left its mark on the genre.

After Street Fighter’s 2D combat demanded players master complex combos, Tekken’s pitch of a fully 3D and newbie-friendly brawler was a bit of a no-brainer. But with both the casual and hardcore fighting game fan now already catered for, SoulCalibur needed to offer something truly unique to make it stand out. Turns out, that something was a 3D fighter with purely weapon-based combat.

Launching in 1995 – under the name Soul Blade in the west – this medieval button masher’s stunning visuals and over-the-top characters made it an instant cult hit. Whether it was weirdo warrior Voldo’s bizarre gimp-meets-Wolverine aesthetic (the only skimpily dressed male character and er, not a sexy one), or the impassioned announcer that bellowed out the result of each match, the series’ high production values and charming sense of character made it immediately stand out from its peers, spawning five successful sequels.

Now, after a six-year absence, SoulCalibur is back –- but does this once innovative IP do enough to feel fresh in 2018?

Just like Tekken before it, SoulCalibur is one of those rare fighting game series where its lore is just as celebrated as the actual fighting itself.

In a fan-pleasing move, then, for its sixth outing Bandai Namco Entertainment has decided to take us back to where it all began. Serving as a prequel to the aforementioned Soul Blade, SoulCalibur VI brings back series mainstays and shows them looking more youthful than ever.

In the early build we got to test, franchise favourites Kilik, Xianghua, Nightmare, Mitsurugi and Sophitia were playable, alongside newcomer Grøh.  While there were just two stages for us to duke it out on, this meagre selection was all Namco needed to prove that SoulCalibur VI will be just as much of a looker as its predecessors.

A Flash Flood Of Colour

As the camera pans around an artic-inspired stage (imaginatively named Snow-capped Showdown) and Xianghua’s outfit sways gently in the wind, it becomes immediately apparent that current gen tech has breathed new life into the series. Setting the scene for the battle ahead, sleet swirls majestically around the two warriors as they stretch out and limber up for battle. As each fighter dishes out their signature taunts, stalagmites in the foreground glisten brightly in the sun, before its rays deign to illuminate Mitsurugi’s gleaming blue chest plate.

Where Street Fighter V opted for an impressive cel-shaded aesthetic and Tekken 7 pushed the envelope when it came to neon-lit, modern metropolises, the extra detail Unreal Engine 4 brings to SoulCalibur’s ancient Greek-inspired stages is truly stunning.

Re-designing The stage of History with a Spectator view

It’s not just the graphics that have had an impressive overhaul here though, because when it comes to gameplay, this is not the same fighter you remember from yesteryear.

Just like Namco stablemate, Tekken 7, SoulCalibur has also embraced the tide-turning ultra attacks that Street Fighter IV popularised back in 2008.  Alongside its new-found cartoon-esque visual flairs, the addition of screen-filling attacks feels like a bid to ensure that this game is just as entertaining to watch as it is to play.

Known here as Critical Edge attacks, each player must land enough blows to fill up their respective Critical meters. Once they’ve dished out enough damage to bank one of these cinematic special moves, a single squeeze of a trigger allows players to unleash a torrent of furious blows at their opponent. As you’d expect, timing and positioning is key here, but if used correctly, these devastating attacks can take a fairly big chunk out of your enemy’s health bar.

While fans of the series will know that this is just a refined version of the Critical Edge system from SoulCalibur V, it’s the newly implemented Reverse Edge system that marks the biggest departure for the franchise. Essentially a rock paper scissors-style guard break, tapping the right bumper slows down time mid-battle, triggering a short cinematic where each player has to unleash the right type of attack in order to counter their opponent’s Edge.

It looks cool and feels fun initially, but as matches went on, it increasingly seemed like a concession to newer players that pros will quickly grow tired of. Its still early days, however and Namco stated that the team is still considering having Reverse Edge as an in-game option, rather than a mandatory mechanic.

Somethings are better left in the past

Yet, this prequel approach isn’t SoulCalibur VI’s only piece of blatant fan-service – unfortunately, its also a game which features THAT kind of fan service, too.

Like its predecessors, Namco’s latest isn’t afraid of dressing its characters in some highly impractical outfits. With many of the female fighters designed from less of a male gaze and more of what feels like a drooling leer, fan favourite Sophitia once again bounces and jiggles around the arena in a skimpy skirt and revelatory blouse.

While this is nothing new for the 23-year-old series, frankly, it all feels a bit embarrassing and (slightly tone deaf) in 2018.

To make matters worse, fighters can actually lose even more clothing as each battle unfolds. Once a player successfully lands one of SoulCalibur VI’s screen-filling Critical Edge attacks, bits of the victim’s armour coming flying off. While it takes some time to reveal much of the male fighters’ modesty, given most female characters’ lack of clothing to begin with, this unsurprisingly leads to some pretty extreme states of undress.

In fairness to Namco, there is a slightly knowing nod to this sexism here, with destroying the armour of heroic samurai Mitsurugi revealing a hilarious butt-cheek-hugging g-string underneath.

Still, eye-rolling character design aside, SoulCalibur VI is shaping up to be just as accomplished a fighter as  fans would expect. With Namco currently keeping the much-anticipated story mode under wraps, it’s hard to judge how this will fare as a complete package, but in terms of how it looks — and more crucially, feels — the foundations have been laid for SoulCalibur to step out from ‘the stage of history’ referred to in its tagline, and instead, to forge an exciting new future for the franchise.