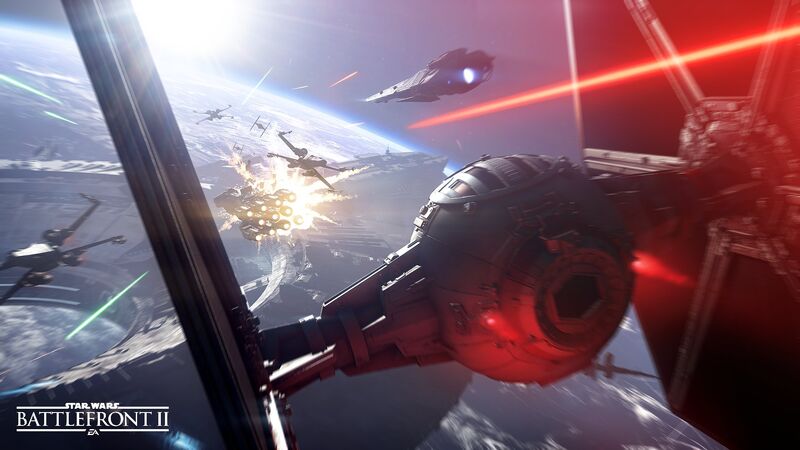 When last year’s Star Wars Battlefront was first revealed, it felt like a bit of a dream come true. With the studio behind the brilliant Battlefield series handling the Star Wars license for the first time, fans were salivating at the prospect of finally getting the Star Wars/Battlefield mashup they’d always dreamed about.  Unfortunately, though, that’s not quite the game we got. With the anticipated game blighted by a rushed development cycle and a bewilderingly simplistic gameplay loop, last year’s Battlefront ended up leaving most Star Wars fans hugely disappointed.

Thankfully then, it looks like EA has taken that criticism on board for the sequel. With both Battlefront 2’s single player and the Galactic Assault multiplayer mode  impressing us back at E3, Battlefront 2 is shaping up to be one of the best Star Wars games to date. Yet, despite all its massive improvements, there was still one part of the game we were nervous about – the space battles. Thanks to its predecessor’s dodgy flight controls and laughably small dog-fighting maps, Battlefront’s half-hearted aerial affrays paled in comparison to the epic space battles we love in the movies.

Well Star Wars fans, after sitting down with  Battlefront 2’s Starfighter Assault at Gamescom its time to breathe a sigh of relief – because this is the most fun we’ve had piloting an X-Wing since 2003’s Rogue Squadron.

This is the Star Wars dogfighting experience fans have been waiting for.

For EA’s latest Battlefront, the fighter pilot mode has been taken out of DICE’s hands and instead developed by Burnout and Need For Speed studio Criterion – and boy does it show. Jumping into a fighter, the first thing we noticed was just how much better flying these iconic fighters feels in Battlefront 2.  Joining with the Rebel fleet, we were thrown into a huge space battle on a map called Fondor Shipyards. Inspired by the single player level we played at E3, this surprisingly expansive map saw Rebels and Imperials tasked with two very different objectives. If you choose to join the Rebellion, you’ll be attempting to take down a Star Destroyer as it’s being repaired.

As you’d expect from taking down a Destroyer, this is no easy feat. On this map, the attacking Rebel team is tasked with completing a series of shifting objectives in order to take down their target. Life’s a bit easier if you’re siding with the Empire though, as all you have to do is simply take down those pesky Rebels.

Hopping into the cockpit of a trusty A-Wing, we soared between enemy fighters and the Rebel fleet with ease,  carefully diving and swooping until we lined up our reticule with a nearby Tie Bomber, blasting it into smithereens. It’s this sense of the chase that really makes Starfighter Assault feel like the movies. With players having to skillfully maneuver until an enemy is within targeting range, the intensity of each dogfight perfectly captures the essence of a spectacular Star Wars space battle. This is largely thanks to the brilliant new controls. Criterion have completely overhauled how space combat plays. With pitch and roll mapped to either analogue stick, movement feels natural and intuitive, meaning that players can focus on battling the enemy fleet  and not the game’s controls.

In Starfighter Assault, each player has three classes to choose from: fighters, interceptors and bombers. While these ships’ abilities can eventually be customized using unlockable star cards, each class still manages to have a very distinct feel right off the bat. Here, which class you’ll choose will depend entirely on your playstyle. Bombers like Y Wings and of course, TIE Bombers move as slowly  as you’d expect, but can also zoom in on targets further, allowing them to sit back and rain down laser fire from a distance. This is obviously a a completely different experience to flying the nimble and close range X-Wings of the fighter class. Thankfully though, changing fighters can be done painlessly after each spawn, so you’re not locked in to a certain ship for a whole game if you want to mix things up.

In a nice touch, heroes return once again, but this time, they actually feel suitably heroic. Just like in Battlefront 2’s other multiplayer modes, Starfighter Assault’s heroes are only unlocked if you rack up enough points during the round. It’s a cool system, meaning that unlocking the likes of the  Millenium Falcon or Slave 1 feels like something you’ve earned, rather than the randomly generated token-based unlocks of the last game.

Its worth racking up this points too, as this time around these hero characters are genuine game-changers. After taking quite a pounding from Imperial laser fire, our fleet of X, Y and A wings were looking a little worse for wear. Thankfully, a quick kill meant we had just enough points at our disposal to spawn in the Millenium Falcon. Soaring into the fray, we blitzed passed our enemies using the Falcon’s trusty speed thrusters, unleashing laser fire from its devastating cannons and destroying 8 enemy fighters in a row. It was a really cool moment, making us genuinely feel like we were Han Solo, reluctantly swooping in to save the Rebellion’s arse once again.

After sitting down with Battlefront 2’s Starfighter Assault we came away with a huge grin on our faces. With developer Criterion Games seemingly managing to strike the perfect balance between complexity and fun, this mode felt like the Star Wars dogfighter we’ve been dying to play ever since the last Rogue Squadron game. With Battlefront 2 seemingly offering an intriguing story, a deeper troop-based multiplayer and brilliant space battles – it’s looking like the force could be very strong with this one indeed.