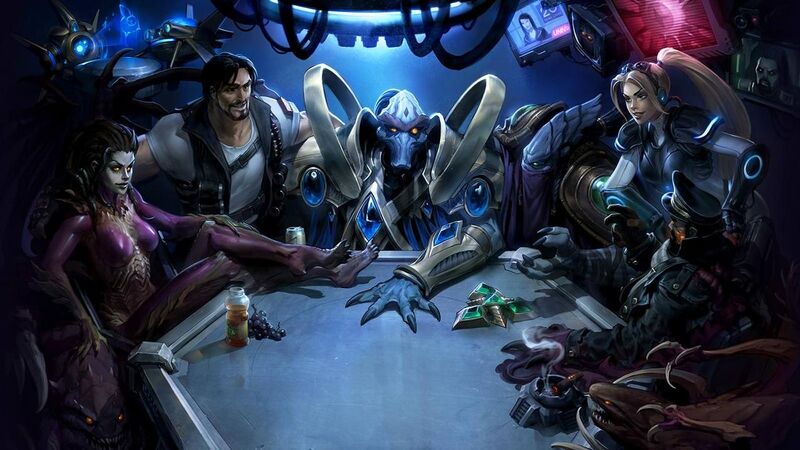 ‘Starcraft’ 20th Anniversary: What Fans Are Most Interested In

The original Starcraft was released on March 31, 1998, An expansion pack — Brood War — followed in November of that year. A spin-off, Starcraft Ghost, was announced in 2002 but was never made. Fans had to wait over a decade for the sequel. Starcraft 2 was eventually broken up into three games: Wings of Liberty (focusing on the militaristic Terrans), Heart of the Swarm (focusing on the ever-evolving Zerg), and Legacy of the Void (focusing on the purity-obsessed Protoss).

A co-op mode, featuring notable characters from Starcraft 2, was introduced in Legacy of the Void, and is regularly updated with new commanders and missions.

This content, along with recent remaster of the original game and pro tournaments (especially in South Korea), has sustained fan interest even though the last title — Legacy — came out in November 2015. Players continue to visit FANDOM’s Starcraft community to read up on franchise lore, characters, and gameplay tips. To celebrate the 20th anniversary of Starcraft, here are the top 10 most visited Starcraft pages on FANDOM from the last five years (only a quarter of how long Starcraft has been around, but our wikis weren’t online back then!).

As the franchise’s antagonist turned protagonist, it’s no surprise Sarah Kerrigan is at the top of the list. Kerrigan was a Terran ghost (special ops agent) who was captured and transformed by the Zerg into the deadly Queen of Blades. She was temporarily defeated and depowered, only to willingly be transformed again to combat an ancient alien threat. By the end of Legacy, she underwent another dramatic change. She is one of the most complicated and compelling characters in the franchise, if not all of gaming.

The aforementioned ancient alien threat that sought to bring all life to its end and remake it in his image. It takes the combined might of the Terrans, Zerg, and Protoss to defeat Amon. Several major characters are lost along the way — notably the dark templar prelate, Zeratul.

As new units were introduced, altered, and nerfed during the various campaigns, fans wanted the latest specs on the numerous units. Interestingly, there was significant interest in the unit quotations, as well (if players click on a unit more than five times, they say funny or nonsensical things). The units that fans looked up most? Protoss immortals, followed by dragoons.

The enigmatic Xel-Naga originate from the Void. Their mission is to study and populate the universe with sentient life. The Zerg are seen as the purity of essence, while the Protoss are seen as the purity of form. Amon is a fallen Xel’naga who creates the Zerg-Protoss hybrids that are viewed as abominations. At the end of Legacy, the Xel-Naga empower Kerrigan with celestial abilities to destroy Amon once and for all.

There was plenty of interest in the co-op missions and gameplay strategies. The most-searched co-op commander? Fenix, followed by Dehaka. This could because they’re two of the newer commanders or the fact they have unique gameplay — Fenix is three hero units in one, while Dehaka and his units evolve by consuming essence.

The Protoss edged the Zerg as the most-searched race, undoubted as the most recent game focused on the psionic-based race. There was lots of interest in its leaders, namely Artanis and Zeratul, and the Tal’darim — a fanatical set of Protoss under the leader Alarak.

The former Terran admiral plays a pivotal role in the first game and makes a surprise reappearance in Heart of the Swarm as an infested Terran. Alexei Stukov’s transformation is far more dramatic than Kerrigan’s; his body is covered in a Zerg carapace and his jaw and eye sockets are filled with swirling energies. As one of the series’ more enigmatic characters, fans were interested in his past.

The Zerg are the second most-searched race, after the Protoss. The Terrans trail third, with less than half the page views. This could be because the Terran campaign, Wings of Liberty, was the first released and therefore fan interest is less (also, for this feature, data only goes back five years; Wings was released in 2010). However, fan interest on human characters — outside Kerrigan — is noticeably less. The Terrans with the most interest? Jim Raynor and Nova Terra.

Starcraft II: Legacy of the Void

It should come as no surprise as the latest release rounds out the top 10 most searched Starcraft wikis. The franchise comes to a climatic end in Legacy, and there’s been no word from Blizzard on a Starcraft 3.

For now, there’s another legacy for fans to enjoy — the 20-year-one that is the Starcraft Universe. Dive into the Starcraft community to learn more. Happy 20th anniversary, Starcraft!