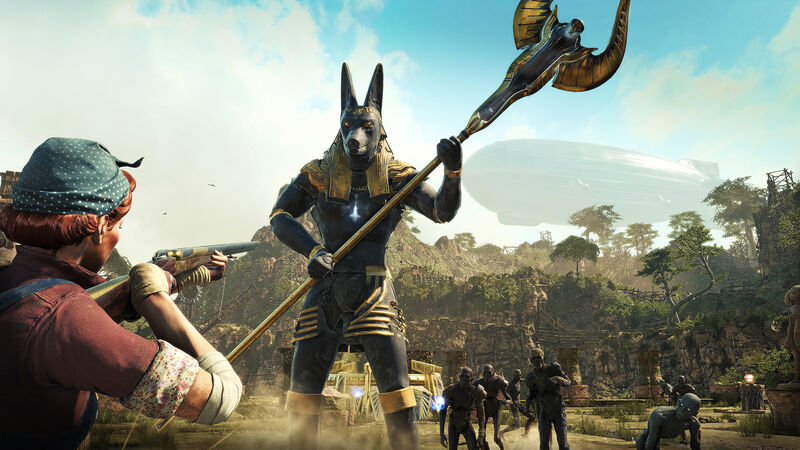 There have, and there will be, better games released this year than Strange Brigade, Rebellion’s upcoming third-person shooter. What we will wager though, is that there won’t be any games coming out this year that are more fun.

This campy co-op caper is set in the 1930’s, and if you’ve ever watched Tarzan or  The Lost Jungle – or basically any of those slightly shambolic, grainy adventure movies that budget TV channels pump out during the day  between breakfast shows and vaguely exploitative documentaries about poor people – you will be familiar with the world of Strange Brigade. In other words, it’s a game about lost tombs, sealed crypts and embarking on daring expeditions to places no adventurer has dared set foot in before.

If this is all sounding a bit Tomb Raider to you then you’d be forgiven. But if Strange Brigade does resemble Tomb Raider in any way, then the only way it does would be if you played it after ingesting an awful lot of drugs. This game, dear reader, is its very own brand of brigadier-baiting bonkers.

“Strange Brigade started out a bit like Zombie Army Trilogy,” says Ben Fisher, Studio Design Director at Rebellion, today making a rare appearance outside the creative confines of the Warwick branch of Rebellion where he’s based.

“Tone was very important to us. We wanted it to be funny, but we wanted the enemies to be a serious challenge too. The 1930’s adventure serial was very much the core influence. What really brought it together – what made the humour stick together – was when we brought the voiceover in, that kind of old British Pathé voice. That’s actually Greg McCready, who did some of the voices in Zombie Army Trilogy…”

If Indiana Jones were a Campy shooter

Ah yes, the voiceover – or the narrator so to speak. Like their underrated previous title Zombie Army Trilogy, there’s a high energy, pulpy tone to everything Rebellion touch and so one of the things you’ll realise as soon as you pick up Strange Brigade and press play, is the ‘Cor blimey, tally ho chaps!’ narrative, emanating from a never identified, discombobulated narrator, that as Ben says,  sets the scene for the adventure that unfolds.

It’s a neat trick. And one that helps to serve up a very charming and (very old school) slice of British gaming. Leave your character untouched, forget to press pause, and the narrator will gently chide you to return and finish the adventure. All of which would just be pleasant trimmings if the gameplay itself didn’t hold up. Guess what? It does.

One game that Strange Brigade unquestionably does owe much to is Left 4 Dead. Like Valve’s zombie-blasting classic, here, you pick one of four characters. There’s Frank Fairburne – kind of like a Victorian-era Danny Dyer, a no-nonsense gun for hire. There’s Archimedes de Quincey – a bit like Indiana Jones, if Indiana Jones had been bullied at school. Stealing the show is Gracie Braithwaite – imagine if WWII propaganda icon Rosie The Riveter was cast in British soap opera Coronation Street as a bruiser from the industrial north -who utters a game-stealing cry of ‘icky thump’ whenever she bashes in the skull of a zombie.

Last but not least, there’s Nalangu Rushida, an African warrior that may well inspire some debate about cultural sensitivities, but who is unquestionably a killer character to play as.

Essentially the core objective is to fight your way through a variety of missions given to the Strange Brigade, a kind of colonial era, mummy slaying Secret Agent take on The X-Men or the Fantastic Four. The overarching premise is to take down Seteki, ancient and undead ruler of Sahara Africa, who has been awoken by the clumsy archaeologist Edgar Harbin.

Surprisingly though, there’s much more narrative on the bones of the game than there is in either Left 4 Dead game, but the mechanics are more or less the same. Don’t be surprised if the co-op mode of the game becomes just as popular as Valve’s title. As we say, despite a difficult-to-quantify unsophisticated design to the game – though it must be said, Andy Pattison’s art style is stunning – it’s one that is going to be a whole load of fun in online co-op, or on the sofa, playing with real world friends.

Tomb Raiding with a side of Universe building

“What we’ve noticed watching people play,” says Ben, “is that when playing co-op, players seem to play in the style you’d expect from a co-op shooter. But when they play alone, there’s a more methodical style to their play. Like they’re invested in the story more. They take time to solve the puzzles. To look for all the treasure. It’s a different game depending upon how you choose to play it…”

The pulpy feel to Strange Brigade runs throughout the game. The traps feel slightly ramshackle. Spikes and pits; bits of wood filed to a point everywhere. Fans of Rebellion’s output to date will know that the company own and publish classic British genre comic 2000AD, and the tone of Strange Brigade is very much in line with that of the inky that brought the world the likes of Judge Dredd and Rogue Trooper.

In fact, legendary comic writer Gordon Rennie actually penned the script for the game, while there’s a growing universe of crossover between Rebellion titles and the comic. “There’s references within Strange Brigade that overlap with other Rebellion games,” says Ben, slightly conspiratorially, “so there a Sniper Elite Easter Egg if you keep an eye out for it. And in the new issue of 2000AD I believe there’s a Strange Brigade comic starting in it…”

If Strange Brigade is 2018’s most fun game, it might also be it’s most creative too. Tonally, thought has been applied across the scale. Case in point; the Strange Brigades’ weaponry feels a little bit like it might break if you use it too much too. There are moments, when the screen is filled with enemies – minotaur’s, skeleton pirates, giant scorpions, all the classics – and all you have to defend yourself is a rusty blunderbuss, where you genuinely think, “I am about to die horribly”. With up to eighty enemies on screen at its peak, there’s a genuine ‘you against the horde’ feel to combat.

“That’s exactly what we were going for,” says Ben. “We wanted a cohesive tone throughout. Just to fill the game with all the things the team think are cool. We wanted a sort of ‘Make Do And Mend’ approach to facing down the undead hordes, a bit like the Ministry Of Defence have bolted bits onto the weaponry they already had to work better against the supernatural. Personally, I think the game is most fun when you’re fighting at a sort of mid-range, where the enemies are right in front of you, where it’s all a little bit out of control. I think the weapons lend themselves to that kind of experience.”

We leave Ben bemoaning the idea that Rebellion could have used the recent opening of an ancient sarcophagus in Egypt to promote its new title. Plenty of studios take out big adverts for their new releases. Who else but Rebellion would bury its new game under a pyramid, launching it by having it revealed by the world’s most elite archaeologists.

“We missed a trick there,” says Ben. “But I’ll give you a scoop. You know the red liquid they found inside? That’s actually the health potion you use within the game…”

You heard it here first people…