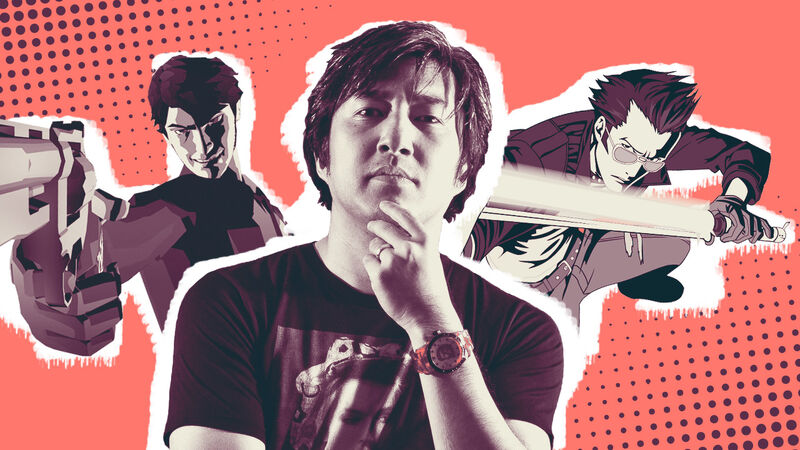 After years of uncertainty, Suda51 has finally resurrected his beloved No More Heroes series with upcoming Switch exclusive — Travis Strikes Again: No More Heroes. We’ve played it, and are happy to report that it’s a refreshingly retro-feeling slice of B movie goodness. Yet, as good as this upcoming spin-off looks, there’s another reason for fans to start salivating: the legendary game creator also confirmed to us that he’s already planning a fully-fledged mainline outing for Travis Touchdown – the long-awaited No More Heroes 3.

As fans will know, Travis Touchdown isn’t the only charismatic character Suda’s brought into this world. With the quirky developer also responsible for dreaming up a slew of other cult classics, we were eager to try and find out what else lies on the horizon for Suda51 and his studio, Grasshopper Manufacture.

It turns out, there’s one project he’s always dreamed of working on — a Gundam game. Suda51 was hugely inspired by one particular Gundam mini-series, 1989s Senkou no Hathaway and with Bandai now turning the novels into a big budget anime trilogy, he reveals that he’s eager to turn the mini-epic into his very own sprawling sci-fi video game.

“15 years ago, there was this Gundam novel published — a very famous Gundam novel called Senkou no Hathaway — and I always wanted to make a game [based] on it. The thing is,  just recently they announced that they’re going to make a three-part anime film series based on that novel. So, I feel like now is the time to make the game… even though Bandai Namco hasn’t given me the OK or any kind of permission. I haven’t even talked to them whatsoever but I feel like it’s my mission to do it, I’m going to do it whatever the cost!” he laughs.

His enthusiasm is infectious. A giant grin is plastered on Suda’s face as he frantically gesticulates and gushes about the iconic manga series.

“I love Gundam. The problem is, if I do decide to make that game, I’ll probably have to focus on only Gundam for the next four years. I probably won’t be able to come overseas either, because Gundam games hardly ever get released outside Japan, so I’d probably cut off all connections with foreign gamers,” he says, pauses, then continues: ”It might kill me too… but hey, it would be worth it!”

A Suda51 game with Laser swords and giant robots? Count us in. Yet, while that’s a game concept that currently only exists in Suda’s dreams, it turns out, the mecha-loving maestro also has some more concrete projects in mind.

“I thought I had three new IPs… but I actually have four new IPs that I want to work on. But it’s been a while for No More Heroes, so I really think it’s important to get that IP going again to give it some steam. But at the same time, one of my big missions is to keep going, to keep making new IPs.”

While he doesn’t give much away, Suda51 hints that he’s keen to make a game that really embraces the new inter-connected age.

“I can’t really tell you the details but I’ve talked to my staff about the kind of game I’ve always wanted to make but haven’t been able to, until now — a game that gets updated every week. One of the reasons I can’t really tell you any details is because nothing is really set in stone yet but I do have an outline image in my head. It’s the kind of game that I think would be a really great fit for the way things are right now.”

Despite already dipping his toes into the free-to-play realm with 2016’s Let It Die, Suda reveals that he believes there’s a better way to approach monetisation than microtransactions.

“There are, of course, free-to-play games that get released and have microtransactions that keep them going but that involves a lot of heavy work and I’ve always wondered if there’s a different way to go about things; a different way to release the game in that sort of modern fashion,” he says. “My studio is used to just completing one game and just selling it when it’s done but I really want to try something new even if it might not be possible for a while…”

Could Killer7 Come to Switch?

With the Gamecube classic getting a new lease of life with a recent Steam port, could the once Nintendo exclusive come to Switch?

“I’d love to bring Killer7 to Switch,” says Suda. “However, Capcom owns 100% of the rights to that game, it’s really thanks to them that the PC version came out at all just because they OK’d it and a publisher came along to help distribute it, which is really great. But I’d have to talk to them again to see if it’s possible to get the ball rolling on Switch. The thing about Killer 7 is that it really was a sudden release, we weren’t able to do much promotion for it before it came out, so I really feel like I have a duty to make sure that people are even aware that it exists.”