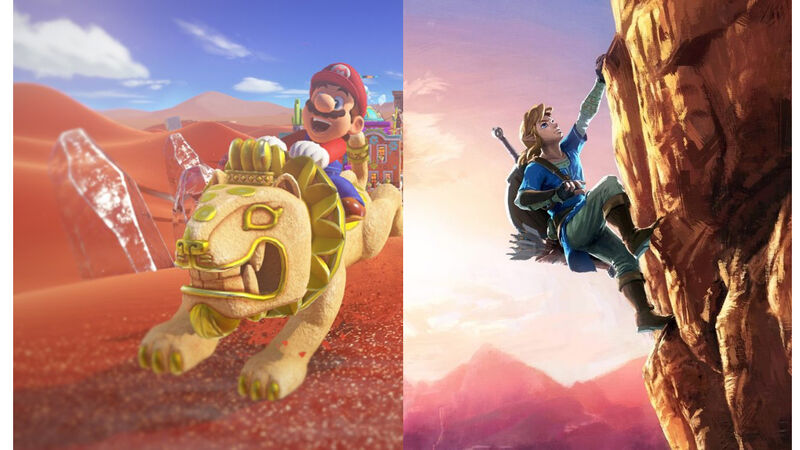 ‘Super Mario Odyssey’ VS ‘Breath of the Wild’

Nintendo has always been a company that’s put play first. While it has narrative-driven franchises like Metroid, Fire Emblem and The Legend of Zelda, a quick glance at its back catalogue will confirm that most of the Kyoto giant’s games are simply defined by how brilliant they feel to play.

Yet with the release of this year’s open-world Switch epic, The Legend of Zelda: Breath of the Wild, it seems like Nintendo’s design focus is suddenly beginning to change. Instead of just crafting tightly knit dungeons for Link’s latest adventure, developers Nintendo EPD opted to let players loose on a sprawling landscape. For the first time in recent memory, the thrill of a Nintendo game wasn’t purely coming from the act of play, but the intricacies of the playground itself.

Interestingly though, it doesn’t look like this approach is just being saved for The Legend Of Zelda. After spending several hours with Mario’s latest adventure, it seems as though Breath of the Wild’s “game world-first” strategy has also been thoughtfully applied to Nintendo’s mustachioed mascot.

If you’ve been following Nintendo’s next big Switch release, you’ll know that Super Mario Odyssey splits its platforming into numerous large-scale sandboxes called kingdoms. While these enclosed realms are obviously a far cry from the seamless open world of Link’s latest adventure, it’s the density of activities and sense of personality poured into each themed world that feels so reminiscent of Breath of the Wild.

Where previous Mario outings saw players gleefully hopping across linear paths filled with obstacles, this time around, they are free to run around each sandbox as they please. Just like chopping down trees and messing around with Link’s stasis abilities in his aforementioned adventure, Nintendo have poured enough small details into Odyssey to ensure that there’s always simple delights to be found in goofing around across Mario’s new locales.

Just like Breath of the Wild, Super Mario Odyssey also features a wealth of NPCs asking our hero for favors. With secret areas, side quests and mini games carefully littered across each kingdom, there’s an element of exploration to Odyssey that simply hasn’t been seen before in a Mario game. It’s arguably the first time we’ve seen such an obviously RPG-inspired system in a mainline Mario game.

Don’t expect to stumble upon any cunningly disguised ninjas here, though.

A Link To The Parlour

Another interesting game mechanic the Mario teams seems to have gleaned from its buddies across the office is the ability to buy different outfits. While clothing obviously serves a very different (and more crucial) role in the last Zelda outing, it’s the feeling of  customising Nintendo’s icon that makes Odyssey feel a bit familiar.

With players loving to share pictures of their pimped-out Link on social media, Nintendo seems to have even taken that element one step further. Mario’s latest features a built-in Uncharted-esque photo mode, allowing players to take snaps of Mario at any stage of his adventure.

Once again, it’s an element that encourages player freedom and expression, pushing the game’s bustling playground feel to the foreground.

While there are probably plenty more comparisons between Nintendo’s two major Switch titles, those similarities will surely be revealed as we get closer to release.

For gamers who loved the freedom and joyful sense of discovery that came with Breath of the Wild, it’s looking like Super Mario Odyssey will offer up some surprisingly similar thrills.