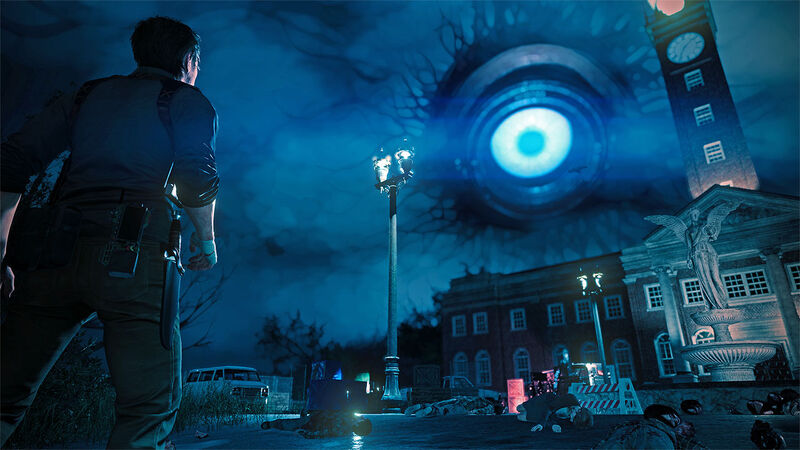 ‘The Evil Within 2’ Review: Saved by the Villains

There’s a decided lack of jump scares in The Evil Within 2. They’re there, of course. But much like this year’s earlier Resident Evil 7, the focus here is on atmospheric, psychological horror.

That kind of sustained dread is much harder to achieve — and while The Evil Within 2 won’t be known as a master of “atmospheric” horror — it has definitely achieved a horror that’s “interesting.”

The first few hours see you heading back into a Matrix-like virtual world similar to that of the first game. It turns out you have a daughter whose innocent brain is the ideal Core for a supercomputer (just go with it) which can connect all humanity into a hivemind (just turn your brain off) to be controlled by a massive, subsidised private military contractor (actually, that’s the plausible part).

Your daughter Lily is alive but in trouble, you’re told, and only by diving into the supercomputer’s virtual town of Union can you save her.

Needless to say, not all is well in Union. What was once small-town America is now Hell on Earth. The world itself is falling apart and zombie-like horrors walk the streets. All over, you see the bodies of security forces sent in to retrieve Lily — or simply “the Core.”

This translates to some very large suburban zones to sneak around in. It’s not exactly open world but it certainly is open level. This was a really welcome change in a genre that’s normally very dependent on linearity for its crafted horror experiences.

Perhaps you’ve invested in long-range weapons and aim-increasing abilities, so you’d be comfortable with open fields. Or maybe you went for the talent that allows around-the-corner stealth kills, so the crowded alleys are more your game.

A lot of the base level talents are 100% necessary, due to protagonist Sebastian‘s subhuman athleticism. He’ll sneak at a snail’s pace, and puff out after running the length of two cars. You’ll have those traits fixed halfway through the game. Then you can start on the more fun and diverse talents.

Improving weapon sway and recoil can be great for long-range firearms. Health, stamina and recovery are also options. These include outright numerical increases, as well as utility talents like using any bottles in your inventory to break a grab attack. But given the game’s bias towards stealth gameplay, that’s one talent tree you can’t ignore.

As you sneak through these levels, different paths also hold different combinations of enemies. You can stealth kill them all, or sneak right past, or “go loud.” The latter is possible, but not sustainable.

Out of the 20-25 hours in the game, much of it will be spent waiting behind cover for the right moment to pounce. This is a brand of gameplay very on par with The Last of Us. Resource rarity makes the stealth kill king.

A Town of MacGyvers

The citizens of Union had a habit of carrying gunpowder in their pockets, and you’ll scavenge it to make all kinds of cartridges and explosives. But it bears repeating: Items are scarce. Often you’ll spend your three bullets and need to loot mid-firefight to craft a few more.

Enemies are kind enough to wait. Time freezes while you craft as you’re being chased, but this didn’t break the immersion. If you’re doing this, it’s because the situation is frantic.

Weapons are mostly standard fare except for the crossbow, which is your utility tool. Frost crossbolts to freeze enemies, smoke bolts to blind them, shock bolts to stun them… These don’t do any damage, but it’s fantastic fun disabling a group of six zombies long enough to stomp on all their heads. Just don’t miss. Ammo is precious.

So no matter your playstyle or preferred weapon, stealth will play a part, and The Evil Within 2 starts playing with this fact about halfway through the game. One particular demonic enemy might turn around every ten seconds and turn on fire every fifteen seconds, giving you two timers to keep in your head as you approach its back.

Combat is punctuated with periods of narrative for pacing. You’re reminded over and over that you love your family and would do anything to save them, sometimes annoyingly so. One particular house had to have everything inspected before moving on. It took twenty minutes of canvassing every wall before finding the one photo to elude my spamming of X.

What was this amazing piece of exposition, warranting a hard block on the player’s progress?

“Myra. What an amazing woman. She truly is capable of anything.”

Not worth the wait.

Did Any of It Really Happen?

Towards the end of the game, sequences become more linear and crafted. You’re going up against those who have the most power over this world. They can manipulate your consciousness to reflect your guilt and pain as a father who failed his daughter. Dreams within the dream.

For the player, this means following paths where perspectives and dimensions are shifted. Grand chasms with waterfalls of blood somehow lead to the staircase in your family home. A door you just closed might open to reveal a completely different hallway.

This is both interesting and counterproductive to being scary. On both a micro and macro level, the player is very aware that none of this is real. Enemies chasing you down corridors might evaporate into smoke, a hallucination all along. A blink of an eye might reveal that torture chamber to be, in fact, just your bedroom.

Whereas the first game maintained the question of “How much of this is real?” the sequel answers it with a resounding, “Nothing.” It’s a psychological horror with no mystery, the nature of these virtual phantoms having been explained from the start.

It’s still worth admiring and enjoying the freakish makeup of some of these monsters out to get you. But when nothing is real, nothing really matters. And when nothing matters, it’s hard to get scared.

“Why does everyone want to control Union? It isn’t even real!” asks Sebastian, already 70 percent of the way through the game.

It’s not that it’s hard to suspend disbelief. Contrary to the norm, The Evil Within 2 doesn’t ask us to suspend disbelief enough. Caring about the plight of one man and one daughter is small-time enough without the whole drama playing out in an inconsequential dream-land.

Is The Evil Within 2 Good?

Atmospheric, psychological horror requires new things to think about. Things for the player to ruminate on after turning the game off. Things that stay with you.

The Evil Within 2 almost gets there.

It’s a little hard to achieve that goal when relying on “been there, done that” tropes like an innocent girl juxtaposed with evil motives and supernatural powers. But there are new, interesting things at work. These get better as the game goes on, culminating in a satisfyingly climactic endgame sequence.

Much of what falls into that category are the game’s bosses, which shouldn’t be spoiled for maximum effect. The villains here have more to ponder than the faceless butchers of the previous game. They might not make you shake in your boots — but you’ll probably be telling your mates about them.