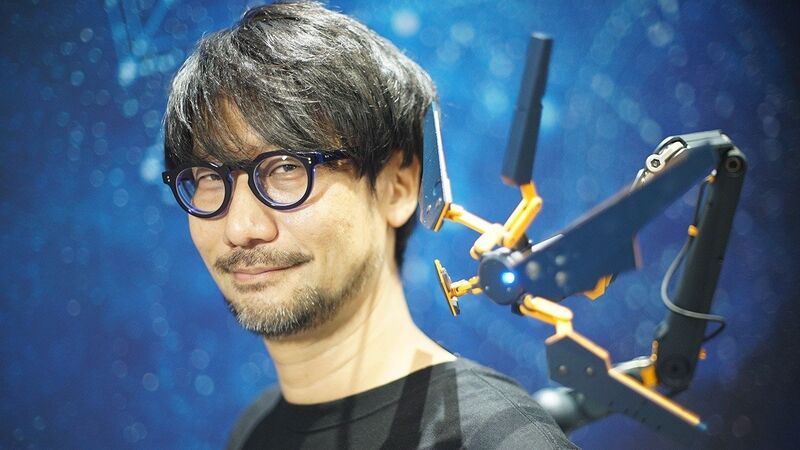 The Road To ‘Death Stranding’: A Kojima Chronology

One of gaming’s most visionary designers and an undeniably charming industry personality, Hideo Kojima has spent his thirty-plus years in the industry subverting expectations and pushing the boundaries of what games can be.

With the deeply enigmatic Death Stranding on the approach, we thought it was the right time to track his greatest hits so far, from Kojima’s humble beginnings as an adventure game designer in the 1980’s to his now revered status as a surreal cinematic visionary.

After cutting his teeth on Konami’s Penguin Adventure (no, really) in 1986, Kojima created Snatcher, a graphic adventure game that draws heavily from the cinema he was consuming at the time. You play as Gillian Seed in the cyberpunk-slicked metropolis of Neo Kobe City, hunting runaway robots who murder and masquerade as humans (Blade Runner, anyone?) The game combines visual novel elements with first-person shooting segments, and still retains a loyal cult following to this day.

Interestingly enough, this is where Kojima developed his penchant for fourth-wall breaking dialogue, as well as introducing us to adorable robot buddy Metal Gear Mk. 2, which would later re-appear in Guns of The Patriots. Ever the innovator, Kojima later revealed he wanted to engrave a secret message on Snatcher’s floppy disks which would be activated by the heat of the disk drive and create the smell of blood. Don’t really know what to follow that with, to be honest.

During the next decade, Kojima found frustration in programmers who weren’t keen to implement his specific dialogue and music cues, finding his feet in the Adventure Game genre, a medium where he could express his artistic capabilities without much compromise, with a deep focus on art and writing.

If Blade Runner served as the main inspiration for Snatcher, then Lethal Weapon is Kojima’s muse for Policenauts, a point-and-click masterpiece about astronaut lawmen who protect a space colony. Protagonist Jonathan Ingram must solve murder mysteries and infiltrate an organ trafficking ring run by a man called Tokugawa (coincidentally, his company would later design Gray Fox and Raiden’s cyborg suits.) Speaking of which…

Kept you waiting, huh? Despite there being four games under the Metal Gear moniker by this point of time, it’s safe to say that Kojima found a perfect storm in Metal Gear Solid 2. No longer limited by the hardware in front of him, he was free to experiment and change the way we look at storytelling in games forever.

Whilst the core gameplay is still remarkable with its groundbreaking enemy AI and impeccably detailed espionage action gameplay, Kojima’s storytelling chops came to the forefront, ensuring his status as an industry legend. MGS 2’s plot concerns the takedown of the ‘Sons of Liberty’, a terrorist cell who seize an oil rig.

Yet, it’s all set dressing for the wider themes explored: the trivialization of information and the control of truth by those in power, suppressing the social evolution of humanity by the violation of privacy, forcing us into thought bubbles where nobody is truly right and the blame is always someone else’s burden.

Sound familiar? Kojima’s existential ruminations on postmodernism via The Patriots and the S3 Plan are still frighteningly relevant to this day, and ensure that Metal Gear Solid 2 will go down in history as one of the best games ever made, marking a shift in storytelling, its legacy felt in most narrative games that succeeded it.

Now for a more light-hearted shift away from modern moral quandaries, here is Boktai, a fun idea that Kojima came up with in between his work on mainline Metal Gear Solid titles (as you do.) A Game Boy Advance game that you may not have heard of, there is a solar sensor implanted in the cartridge that harnesses the power of the sun. Not a joke.

This meant that you had to play the game outside to save up sunlight batteries in order to charge your weapon and defeat the undead enemies. If you’re a lazy bones and play it solely indoors the difficulty spikes and the game forces you to take a stealthy approach and avoid conflict. Weapons deal greater damage if exposed to more sunlight and are essential for beating some bosses. Boktai also tracks the position of the sun in your respective time zone, reflecting this visually in-game.

A genius idea that proves that Kojima is certainly not just a one-trick-pony, Boktai was a critical success but the series faltered after he left the project to focus on more grand designs.

Easily the most exciting horror prospect in video games at the time, Konami had asked Kojima to revive the Silent Hill franchise with his magnificent Fox Engine, the tech behind the stunning Metal Gear Solid V: The Phantom Pain.

This resulted in a mysterious and now legendary demo on the PlayStation store titled P.T, directed by Kojima and horror legend Guillermo Del Toro, with the protagonist played by Norman Reedus and art direction coming from manga icon Junji Ito. You really couldn’t dream a more star-studded lineup than that.

Players explored a decrepit house haunted by a ghost called Lisa, an entity which is impossible to describe with normal horror adjectives. The jittery, bone-crunching movements of the model juxtaposed against the terrifying backdrop of the house created a devastating survival horror experience which involved whispering words to the microphone and discovering a fetus straight out of David Lynch’s Eraserhead writhing in the bathroom sink.

Konami shelved this project and it never saw the light of day, and the world is forever worse off for it. Fortunately, from its ashes rose a new project, with its own Norman Reedus and another funky fetus…

Following tremendous poor form from the company he put on the map, Kojima struck out on his own with help from Sony’s Andrew House to create his own company Kojima Productions. He’s in his prime now and has been given full creative freedom (and by god is he bloody using it.) Revealed in 2015, Death Stranding shocked the world with its surreal, inspired visuals and completely impregnable premise.

This is Kojima’s cinematic magnum opus and the result of everything he’s been pushing for in the industry. Centering around the concept of human connection (umbilical cords and ropes), extinction events and the fluidity of life and death, players take the reigns of protagonist Sam, a porter in an unforgiving landscape working for what is left of America in this peculiar post-apocalypse.

Whilst conspiratory theories are in abundance, we still have very few confirmed details on the plot, and fans are scrambling for connections in fringe science and philosophy, just as it should be with any Kojima game.

Personally, I think that Lisa Wagner is the president and Cryptobites are extinction-adjacent Tardigrades that ward off the Timefall, mitigating the spread of DOOMS disease and reversing Sam’s Chiral handprints received when he suffers a Voidout and his baby clone succeeds him. But really, what the f*!& do I know, at this point…