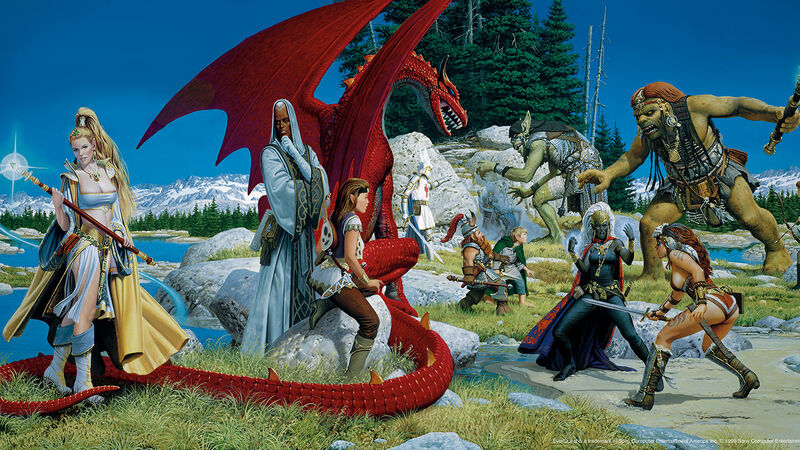 The Weird and Wonderful History of ‘Everquest’

Twenty-years ago this month, a new kind of MMORPG was launched in North America. Its name was Everquest and it boasted a 3D game engine quite unlike anything else that existed at the time. In the unlikely event that a Mount Rushmore-type shrine is ever erected in tribute to the history of MMORPG’s key players, Everquest’s goblin-y features are assured a significant position.

It’s impossible to imagine what the MMORPG genre might look like without Everquest’s existence. Sure, much of the game’s DNA could be found within already realised titles like 1996’s Meridian 59 – widely considered to be the first true 3D MMORPG, though Everquest would refine and popularize the idea in ways the industry hadn’t seen – and, two years prior to Everquest’s arrival, Ultima Online. And yet what Everquest gave to the MMORPG genre far exceeds what it took.

“Everquest is the big foundation for World of Warcraft,” Blizzard president J. Allen Brack told PC Gamer, back in 2008, verbalising what anyone with an interest in the genre had known for almost half a decade. “I think World of Warcraft took a lot of great ideas from Everquest…”

The world of entertainment is littered with the names of the pioneers and the almost rans. They often blur into one. You can find them in the shadow of the bigger name. The name that refined the formula. That hit the jackpot. Everquest is one such name. Much more on the side of ‘pioneer’ than ‘almost ran’, but in truth in 2019 — it’s a bit of both. But it’s not a name that’s ever been forgotten, or ever not loved.

THE EVE OF THE WAR

“From a very first glance at the game script document back in 1998, it was pretty clear that Everquest had the potential to be something really special,” recalls the game’s now Lead Artist Kevin Lydy.”Joining the studio on a freelance basis, Lydy’s first contribution was small but yet significant — creating the game’s logo. Yet, even from his minimal involvement back then, he could tell that this game was going to be big:

“The sheer size of the ambition, and all the oh-my-gawds that envisioning included, was truly remarkable. And it still feels that way now, as I look at the original script hanging in our hallway. I count myself as fortunate to still be on the journey, with players and devs alike..”

Everquest was conceived in the brain of one John Smedley. In recent years, Smedley has become better known for being a victim of the black hat hacking group Lizard Squad, who in 2014 took down the PlayStation Network, Xbox Live, and a year later, Facebook. On August 24th, 2014, when employed in the lofty position of president of Sony Online Entertainment, the American Airlines Flight 362 that Smedley was travelling on from Dallas to San Diego was forced to make an unscheduled landing in Phoenix, Arizona after the group alleged bombs were onboard. A war of words between victim and agitators ensued.

And yet Smedley – since February 2017 the General Manager of the newly opened Amazon Game Studios – deserves to be known for what he’s done, not what was done to him (and for, perhaps, what he will do; whatever you may think of the global box flinging, drone-loving, whip cracking entertainment behemoth, Jeff Bezos brief to Smedley to make “computationally ridiculous games” sounds very exciting indeed).

A fan of table-top role-playing games like Dungeons & Dragons since his days at Mt. Carmel High School in San Diego, Smedley’s vision for EverQuest was to replicate the RPG experience of text-based multi-user dungeons (MUDs) but within an animated 3D world. To do this he recruited Steve Clover, Bill Trost (responsible for Everquest’s mythos and lore), Geoffrey Zatkin (creator of the game’s spell system), Mile D. Cooper (character modelling), and most notably, Brad McQuaid, who was originally taken on as lead designer, and yet would soon be promoted to the role of producer on the project. Clover and McQuaid had come to Smedley’s attention after working together on a shareware role-playing game called WarWizard for the Commodore Amiga, released via the duos own company, Microgenesis in 1993.

STUCK IN THE MUD

Everquest’s principal influence was a freely available MUD named DikuMUD, a multiplayer text-based role-playing game, written by a group of students enrolled in DIKU (that’s Datalogisk Institut Københavns Universitet) at the University of Copenhagen in Denmark. A decade after DikuMUD’s source code was released in 1990, a controversy involving just how influenced Everquest had been by the student’s creation would arise, after Bernard Yee – Director of Product Development for Everquest – told the RE:Game conference that Everquest was “based on DikuMUD”.

The Danish group asked for clarification as to whether this meant in feel and tone, or on the code itself. And so on March 17th, 2000, Verant Interactive (now the independent Daybreak Game Company, then a wing of Sony Online Entertainment) issued a sworn statement that Everquest wasn’t based on any existing code and was instead solely their creation.

Other controversies followed. For a time, the vernacular ‘EverCrack’ became commonplace, with some players drawing parallels with the game and the addictive effects of crack cocaine. On-Line Gamers Anonymous (OLGA), the twelve-step program for recovery from videogame addiction was founded in 2002 by Liz Woolley, after her son Shaun killed himself while logged into the game. Six-years-later, in 2008, the Judge of the 17th Federal Court of Minas Gerais State in Brazil banned the game, claiming “the game leads the players to a loss of moral virtue and takes them into ‘heavy’ psychological conflicts because of the game quests…”

And yet, largely due to the ultra-immersive worlds that have followed, twenty-years on, the game feels almost quaint. Veteran gamers have kept the title alive – though a whopping twenty-five expansion packs haven’t hurt its longevity, let alone a series of novels, a card game and in 2004, a sequel set 500 years after the events of the original, Everquest II.

Everquest has been kept alive by players popping in to experience a time when MMORPG’s weren’t so fast paced and frantic, or wanting to play a game that offered no handholding, where discovery was organic and laboured. There are no illuminated exclamation points above NPC’s here! Many quests didn’t reward experience! (All of which would prove to be the game’s undoing; when World Of Warcraft would arrive in 2004, much of its success can be attributed to the olive branch it offered to the casual gamer).

There’s also the argument that, since the game actively rewarded grind, giving up on Everquest meant giving up on huge amounts of investment (and relationships formed with other lunatic grafters forged on shared servers). You know the way that demobbed soldiers will gravitate towards each other, even though their shared experiences are often ones of horror and suffering? Well, we don’t want to sound trite, but…

The passage of time, and what came next, means it’s complicated assessing just how revolutionary Everquest was at the time. The key is looking at the features it possessed that are now standard within the genre – and how bloody fugly the MMORPG genre looked before its arrival.

Everquest introduced us to the world of Norrath, a fully 3D environment that consisted of five continents. Even now, the level of diversity the Norrath offered was impressive. There were ice-caped mountains. Muggy jungles. Vast open plains and barren deserts. And of course, Norrath was teeming with life throughout, the game asking you to select an avatar from one of twelve races; humans, high-elves, wood-elves, half-elves, dark-elves, erudites, barbarians, dwarves, halflings, gnomes, ogres, and trolls. This influenced the selection of one of fourteen classes; Necromancer, Shaman, Paladin, that sort of thing. Standard now, not so much then. Dipping in now, there’s still a decent level of detail and customisation available to the player. In 1999, there really was little like it.

The critical reaction was unanimously positive. “The bar for online gaming has not so much been raised as obliterated” cooed north America’s GamePro magazine upon release. The anticipation by players was fevered. The game had 10,000 subscribers active within twenty-four hours of launch, the highest number of any online role-playing game up to that point. For a while there, EverQuest was the MMORPG OG.

END OF AN EMPIRE

Unsurprisingly, building such a massive world was no easy feat. “This is an ongoing challenge, as you might imagine,” says Lydy, “Everquest is massive–a mindboggling number of places and characters and histories and lore and stuff. Keeping it all straight, and maintaining continuity, requires a great deal of care. The volume of data that generates is also impressive, too. Not only the actual in-game data, but source material developed in creating it, too. Suddenly needing something 10 or 15 years old often requires the skills of a patient librarian/private detective. Not many games have ever wrestled with something like that.”

All the while, Blizzard was taking notes. World Of Warcraft lead designer Jeffrey Kaplan and Blizzard design chief Rob Pardo were noted players, existing within the Legacy of Steel guild. They knew the game. They loved it. And often they hated it too. They knew what needed to be refined and they knew what was missing.

Ultimately World Of Warcraft – released the same year as Everquest II – would not only take Everquest’s ideas and improve them – ultimately creating a gameplay experience that was just more fun – but would take the USP that was so impressive in 1999 – aesthetic – and raise the bar so significantly, the would be little competition between the two titles from then on.

Similar, but different. The same, but better. The Mount Rushmore of MMORPG’s got a new face. Bigger. More defined. Orcish.

There’s a sizeable amount of activity planned around Everquest’s twentieth birthday. Fanfests. Game expansions. That sort of thing. Fittingly, the majority of activity is centered around the community that’s kept the game alive so long.

“We are truly humbled that this incredible game” reads a statement on the official Everquest homepage, penned by Executive Producer, Holly ‘Windstalker’ Longdale, going on to talk about the marriages, friendships and births that have come about by those who love the game. “Everquest is a much yours as ours – has achieved this rare and unprecedented milestone that began all the way back in March 1999.”

Because here’s the thing. What’s a game without the people who play it? Innovator or follower be damned, nothing should matter more than that when it comes to gaming…