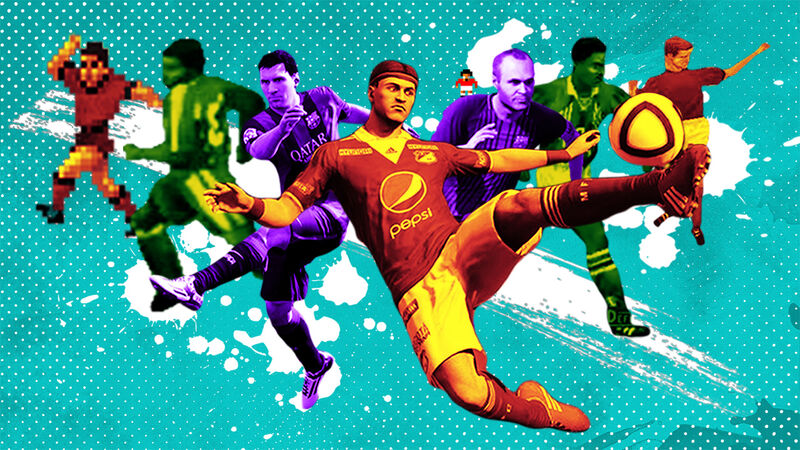 The Weird and Wonderful History of Football Videogames

In case you haven’t noticed, there is a thing on the telly at the moment called The FIFA World Cup. Basically, whenever you turn a television on in Europe, there is pretty much some kind of football being played.  And it’s brilliant.

Yet for many of us, the wonder of constant togger, as nobody other than the people this writer went to school with appear to call the sport, doesn’t just happen every four years. It happens every day, in bedrooms and living rooms, online and off it. And where better to recreate those jaw-dropping moments than sat on the sofa, controller in hand?

You can pinpoint – roughly, like a very drunk game of Pin The Tail On The Donkey- the first attempt at a football game back to the primitive  70’s ‘console’ the Binatone TV Master MK IV. This was a little box you plugged into your telly, filled with pre-installed games, on which you could play slapdash clones of Pong, the 1972 arcade sensation manufactured by Atari.

There was tennis, there was squash and yes, there was football. Although in territories where football wasn’t very popular – the USA, basically – that little game became rebranded as hockey. Unsurprisingly, it didn’t really look or feel a lot like football, unfolding on screen how you’d imagine an Olympics held on the moon might.

It wasn’t until 1979 and Mattel’s Intellivision Soccer, when glorious colour was added to the mix for the toy giant’s pioneering -(albeit beige) – home console, the Intellivision. Aside from being in colour, it had a memorable sleeve too, with buyers treated to an image of a man with a simply outstanding moustache, even for the era in which the game was released.

Then in 1980 there was an early glimpse of the licensing trend that would gain traction in the years that followed, with Atari’s Pele’s Soccer, which was sort of a bit like a very aggressive game of tiddlywinks (and featured a TV advert starring Trevor Brooking and Morecambe and Wise, confusingly).

A License To Underwhelm

That 1980’s monstrosity kickstarted the trend of making terrible football videogames named after really quite good footballers. So cheers, Pele. Many of these serve as a kind of timestamp as to where football found itself at the moment of the game’s release. 2000’s O’Leary Manager for the GameBoy Colour, for example, captures a fleeting moment where Republic Of Ireland and Arsenal legend David O’Leary was one of the most exciting prospects in football management.

There are some deeply strange licensed titles too, like 2000’s Chris Kamara Street Soccer for the PlayStation, which doesn’t feature the former Sheffield United midfield and current Sky Sports punchline in any way other than on the sleeve. Some, however, were decent. Emlyn Hughes International Soccer from 1988, was one of the best games on the Commodore 62, and a fitting legacy for the late, great squeaky-voiced playmaker.

Nearly all football videogame tie-ins clearly demonstrate that, before footballers were so obsessed with their likenesses being correct in football videogames (last year perennially crocked Liverpool striker Daniel Sturridge publicly called for FIFA’s programmers to be fired, after expressing dissatisfaction with his given stats) no player who lent their name to a game ever  actually bothered to play the thing. Glenn Hoddle’s, um, Glen Hoddle Soccer for the Amstrad CPC surely wouldn’t have been released if they had.

What this does, however, is tell us something cool about videogame history and how the medium has slowly come to gain acceptance as a form of adult-orientated entertainment.

When Manchester United’s Jessie Lingard scored his screamer against Panama in England’s second group game of the current World Cup, he celebrated with a dance lifted straight out of Fortnite.

But back to the history lesson, and as the eighties played out, there were some decent stabs at creating something that actually resembled football. 1982’s Real Sports Soccer, for some reason, decided not to include goalkeepers, a bit like Germany’s World Cup group game against South Korea – BOOM – but actually, perhaps for the first time, felt a bit like football, while 1985’s Tehkan World Cup brought the then-innovative ‘trackball’ system into play.

Good bits: you could see the pitch from above, and it was genuinely bonkers that nobody had done this before! Bad bits: the trackball was always broken in every arcade that hosted the cabinet, so nobody ever got to play it how it was intended to be played.

But before anyone could get too annoyed by the arcadey issues,  it was 1989 and the release of Kick-Off arrived and changed everything.

“Best videogame ever!” screamed Amiga User magazine at the time of its release. “Nothing short of brilliant!” roared Personal Computer World. And they had a point. Designer Dino Dini had created a game that took a while to master, yet once it had been, it allowed for genuinely thrilling gameplay. Key to Kick-Off’s appeal was the ability to swerve the ball, y’know, like Brazilian’s did, and a bit like Nintendo’s foray into the market with Soccer, released for the NES in 1985, Kick -Off finally gave us a ball that wasn’t glued to the players’ feet, allowing dribbling (of a fashion).

A sequel, Kick-Off 2, followed a year later, and added further innovations, like goal replays, and the ability to upload teams created within Player Manager, a management sim, also created by Dini and again released on Anco Software, that used the same engine as Kick-Off.

Yet with hindsight, that Kick-Off 2 hadn’t evolved further from its younger sibling, hurt its dominance within the market. Thanfully then, it wasn’t long until in 1992, from Sensible Software, came the almighty Sensible Soccer – though its disciples, and there remain many, will know it simply as ‘Sensi’.

Sensible had already had a stab at creating computer football in 1988, creating the not-especially-sexy sounding Microprose Soccer for the Commodore 64. In the U.S it would be known as Keith Van Eron’s Pro Soccer, taking its name from the Major Indoor Soccer League’s stalwart goalkeeper (Wikipedia is a beautiful thing), and while it also allowed you to swerve shots with aftertouch, and was probably the best eight-bit six-man team football game of the era, it really was more of a blueprint of the brilliance to come.

Sensible Soccer, see, took the basics of Microprose onwards. It unglued the ball from the players’ feet. And it was a sensation, the game’s zoomed-out birds-eye view allowing you to keep abreast of what was going on anywhere on the pitch. Prior to this, Kick-Off’s camera had only followed where the ball was, meaning there was a degree of hit-and-hope to crosses and shots from outside the area.

Dino Dino followed this with 1993’s Goal!, a Kick-Off game in all but name that borrowed many of the elements that had made Sensible Soccer such a hit. There was a Kick-Off 3 in 1994 too. And there were other contenders, like the Mega Drive’s World Championship Soccer 2, which played a bit like a Sensi-put-on-its-side, not surprising given that Jon Hare from Sensible Software had been involved in its creation.

Meanwhile, in the arcade, the simple but fun Virtua Striker impressed with its 3D visuals. But the same year saw the release of Sensible World Of Soccer, a greatly expanded take on Sensible’s preceding megahit, that, in fitting with a game that was head-over-heels in love with everything the player loved about football, allowed anyone playing it the ability to play as clubs from all across the globe.

Pre-FIFA, this was revolutionary stuff. With Channel 4 then regularly showing Italian football and a glut of foreign superstars gracing the recently launched English Premier League, it was perfectly positioned to tap into even the most average of football fan’s worldview going global.

The fervour of the Sensi/Kick-Off rivalry largely masked the beginning of another videogame rivalry that was to shape the future of football videogames. And we don’t mean the civil war that exists between the Football and Championship Manager stables. Because with all this top-down mayhem going on, the isometric FIFA International Soccer – or FIFA 94 – was released in 1993 to not a huge amount of fanfare.

Yet with the birth of the PlayStation and more powerful processing abilities, not to mention the use of real player names for the first time ever, FIFA 96 announced itself as a real contender to the crown of Best Football Videogame Ever, an honour that, at that time, was held by Konami’s International Super Soccer. What Konami’s game didn’t have was official licensing. What it did offer though, was arguably the most realistic, fluid, exciting computer football experience ever.

A series rebrand, to Pro Evolution Soccer, and the release of a new game in 2001, set ‘Pro Evo’ so far ahead of the pack it was like Manchester City had been drafted into the Scottish Premier League.

Yet that official license carried clout – there’s a ticking clock as to how long scoring a goal as Ryan Goggs or Zabine Sizu remains genuinely funny – and EA Sport’s title continued to improve while Konami’s title only showed incremental steps forward. Much of the credit for FIFA overtaking PES in the hearts of videogame football players – “In North America, if you say FIFA, the majority of people will think of us rather than the actual governing body” has said FIFA Creative Director Matthew Prior – must obviously lie with the marketing behemoth that is EA Sports.

But much credit for the franchises’ admirable evolution in gameplay lies with a thirty-something software engineer graduate called Gary Paterson.

The Scotsman had previously worked on Codemaster’s LMA Manager series, but by the mid-part of the last decade, was working for EA in it’s Vancouver offices on FIFA Manager, a management sim that largely used the same building blocks as the FIFA games. Having access to the code, he could immediately see changes he thought would improve the game:

“I wrote a four or five-page document on concepts and methodologies I’d seen in the FIFA code and said [to EA Sports management] ‘Here’s some stuff I’ve seen in the code, I think you’re going about some of these things in the wrong way, and here’s what I’d change’,” he told The Telegraph last year. “I was a little bolshy.” He was promptly installed as lead gameplay engineer and lead designer on FIFA 07, arguably the year FIFA caught up with PES, if not took over.

“Football, bloody hell!” once said Sir Alex Ferguson, after watching his Manchester United team mug Bayern Munich to win the Champions League in 1999. But also said this writer, adding the word ‘videogame’ before ‘football’, and after scoring a 40-yard wondergoal to take down YER_MUM on FIFA 18.

And that, ladies and gentlemen, is a fairly brief summary of the weird and wonderful history of football games.  Now if you’ll excuse us, we’ve got some spreadsheet managing to do – Codemasters style.