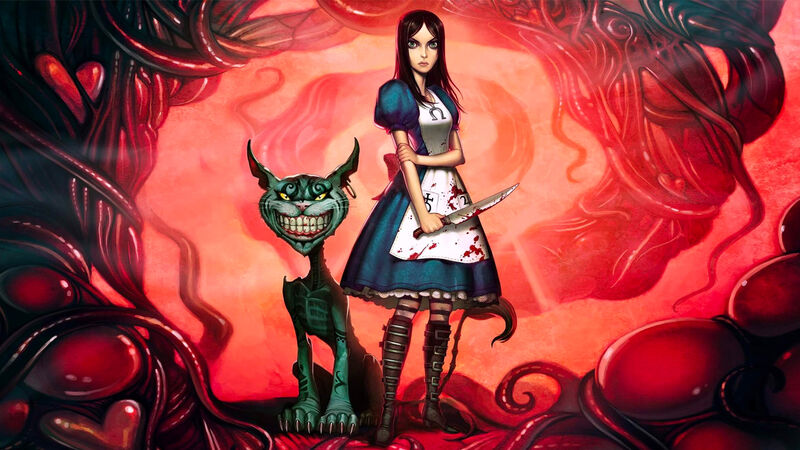 When you think of a “darker” Alice in Wonderland, the 2010 Tim Burton adaptation might be the first thing that comes to mind. But for folks who had a PC in the 2000s, modern cosplayers, Twitch streamers, or even YouTubers that specialize in gameplay content, there’s only one “dark” Alice that matters: American McGee’s Alice.

Since its publication in 1865, some have theorized that Lewis Carroll’s infamous children’s book isn’t a book for children at all and have created their own adaptations in response: In 1967, rockers Jefferson Airplane released their hit “White Rabbit,” which (rather explicitly) implies that Alice’s visit to Wonderland is the result of a psychedelic drug trip. The 1985 British drama Dreamland centers on a fictionalized version of Alice Liddell (the then-little girl that is said to have inspired Carroll to create the character) who revisits a grotesque version of Wonderland associated with her own childhood trauma. The 2015 musical Wonder.land presents a modern version of Wonderland, where the magical world is accessed via sinister online game and is played by Alice in order to cope with her loneliness and rejection from the (real) world around her. The book’s origin even comes with its own (widely debated) dark connotations: Lewis Carroll is said by some to have been romantically fascinated with young Alice Liddell, as the story he told her on a boating trip one day became the basis for the first Alice book.

That being said, it wasn’t entirely out of left field for a then-28-year-old video game designer to place a suicidal and traumatized Alice in an asylum, give her a sword, and have her fight her way through a version of Wonderland that has only become more ghoulish and macabre in the time she has spent away from it. The result? An EA cult classic with a fanbase so dedicated that a sequel was released in 2011, 11 years after the first game’s 2000 release, with a third in the works.

NO MORE DOOM AND GLOOM

Before making a name for himself in the video game world, American McGee worked as a designer for id Software, the company behind games like Doom and Quake. “Those were kind of the same game over and over again,” McGee said in a 2000 interview. “It wasn’t just id doing it; it was all these different companies making basically the same game over and over to recreate sort of real-life places; recreate reality.” After leaving id in 1997, the brainstorming began. McGee had an idea for a game focused on fighting genetically advanced bugs from the future, where the player could shrink down and use weapons other than just standard military hardware. Other ideas involved walking on walls or ceilings in fantasy world type settings. The idea for a dark version of Wonderland came to him one day in a “weird epiphany” while he was driving on the freeway and listening to the song “(Can’t You) Trip Like I Do” by electronic music duo The Crystal Method.

McGee and his creative partner, R.J. Berg, got to work on creating the preliminary sketches of what would become the haunting visuals that his Alice is most known for. According to McGee, the visuals were largely influenced by films like Sleepy Hollow and Edward Scissorhands. Creating the story itself was the harder part: McGee had to figure out how and why Alice would end up back in an alternate version of Wonderland. The ideas were dark from the start: “I searched around and played with development ideas, with child abuse at the start. So that Alice would, for example, come home and get whacked over the head and go into Wonderland, and then actually kill her parents some point during the course of her journey.”

Another idea involved her mom as the Queen and the gardener as the Mad Hatter, with Alice going into Wonderland to investigate the death of her father. Another simply involved Alice having a bad psychedelic trip, in which the gameplay would flash back and forth between the ambulance and the hospital and Wonderland. All of these ideas were rejected by EA, who had agreed to release the game in conjunction with Rogue Entertainment. This led to McGee going for “the simplest story that told the most.” After Alice returns from her trip through the Looking Glass, she becomes the sole survivor of a fire that destroys her house and kills both of her parents. After multiple suicide attempts, she is sent away to mental institution. It’s there that she is summoned to Wonderland by the White Rabbit—but not the Wonderland she remembers. Instead, it’s a Wonderland filled death and gore. The only chance for Alice to heal and find out more about the death of her parents is to free Wonderland from the evil that has taken over.

A haunting soundtrack was created to go along with the game’s dark story and creepy Victorian visuals; Chris Vrenna (formerly of Nine Inch Nails) wrote and performed each track with the help of guitarist Mark Blasquez and vocalist Jessicka (formerly of the band Jack Off Jill). Together the trio recorded ticking clocks, maniacal laughter, screaming, crying, and more.

Unlike the games McGee had previously worked on, Alice is a third-person action game. “It’s all about Alice and her story,” said McGee. Created for the PC, the third-person format allows the player to share empathy and emotion with Alice and become immersed in her story. Plot aside, the player’s objective is to fight enemies and bosses, as well as solve puzzles. Alice can swing on ropes, swim, and even use her inflated dress as a parachute. Throughout the game, ten different weapons, called “toys,” can be obtained, including the Vorpal Blade, the Croquet Mallet, a pair of metal jacks, playing cards–all of which call back to the original Alice in Wonderland. The health bar is displayed on the left side of the screen as Alice’s “sanity.” On the right side, the magic mechanic is displayed as Alice’s “willpower.”

In an early version of the game, the player was able to summon the Cheshire Cat to aid in battle–however, he would merely stand there and offer cryptic advice. Offering advice and often criticism to Alice would become his primary function throughout the game. The Cheshire Cat and The White Rabbit are Alice’s main allies, while The Queen of Hearts, Tweedledee and Tweedledum, and the Jabberwock serve as her main foes.

EA felt the violence in the game warranted an M (for Mature) rating, which McGee tried to fight against. He also didn’t want the game to be sold at Christmastime, for fear of parents thinking Alice was meant for children. EA also insisted on releasing the game as American McGee’s Alice, rather simply Alice. This was also something McGee fought against, as he felt it diminished the work of the entire team of artists, designers, programmers, et al.

American McGee’s Alice was ultimately released on December 5th, 2000, to positive-to-mixed reviews, immediately receiving praise for its extremely elaborate graphics. Gamespot attributed this success to id Software’s Quake III Arena engine and praised both the environment and character design, specifically pointing to the White Queen’s black-and-white kingdom, the giant rotating gear levels, the flat card guards that Alice splits in half, the baby-tossing Duchess, and even Alice herself–who, unlike the Alice of the Disney cartoon, sports long black hair, black-and-white striped stockings, strappy black combat boots, and a blue dress etched with the astrological symbols for Jupiter and Eris, implying that Alice is the true “god” of Wonderland. Per Gamespot: “[Every] character in Alice is unreal; yet, thanks to the incredibly fluid animation, every single one is believable.”

Although McGee never intended on making a sequel, Alice’s cult classic status and sudden resurgence in 2007 convinced him otherwise. In Alice: The Madness Returns, developed through Spicy Horse, the player once again embarks on a third-person journey (this time on the PlayStation 3 and Xbox 360) through a nightmare version of Wonderland (and this time Victorian London) as a slightly older Alice, now living in an orphanage under the care of a mysterious doctor, is summoned to return to Wonderland yet again.

During development, McGee was careful about straying too far from the original, saying, “It’s a continuation of what [Alice] saw in the first game, though the new threat to Wonderland … there’s something else attacking Alice, attacking Wonderland … I would say that it was much darker in many respects than what was threatening her the first time around. The first time around it was all potentially about her losing her mind, going insane.”

Four trailers were released, promising a darker story and bloodier gameplay this time around. One trailer finds Alice in an office where prosthetic arms hang from the ceiling. Blood and teeth pour from her mouth. A voice whispers, “What have you done?” Another trailer features an explosion of flames, the Queen of Hearts’ tentacles dragging Alice into the fire–again, a voice whispering, “What have you done?”

The Madness Returns was released in June 2011 to average-to-mixed reviews. IGN called the game a “memorable peek through a flawed looking glass,” noting that, while the world is once again darkly vibrant, it’s difficult to explore and makes for repetitive gameplay. GameInformer gave Madness Returns a 6.75/10, but praised the sequel for its vast improvement in combat, citing chopping up enemies with the iconic Vorpal Blade and being able to constantly switch between weapons and attack styles as some of the most enjoyable features. Bloody Disgusting revisited the game in a 2019 article, pointing out that the sequel doesn’t quite hold the same cult status as its predecessor, which may be because of use of hysteria as a gameplay mechanic, as well as some of the problematic language used to describe mentally ill individuals (including Alice herself) who exist within the realm of the game.

THROUGH THE LOOKING GLASS

When it was released, Alice quickly rose to success, then faded into obscurity, partly due to the fact that the year 2000 was the beginning of many rapid shifts in the video game industry. However, the game has endured as a fan favorite for the last 20 or so years—so much so that, despite a scrapped third installment tentatively titled Alice: Otherlands and even a film that never made it to production, American McGee has finally (and officially) announced work on a third installment some ten years after the Madness Returns‘ release.

Even with all the advancements in technology, gaming platforms, and engines that the industry has seen over the last 20 years, there just hasn’t been a game quite like Alice. It successfully took a story beloved by children and Disney fanatics alike and mined it for all the underlying darkness it possibly could. Alice went from a silly little girl lost in a big world to a warrior fighting to save to her sanity and heal from the trauma that was so cruelly inflicted upon her. No matter who you are, there’s a little bit of Alice in all of us–whether you’re a dreamer, a warrior, or just someone trying their absolute best to make the world around them just a little bit more tolerable each day. American McGee’s Alice reminds us to walk towards to the darkness and explore it, because we come back out a little bit stronger each time.

Lauren Badillo Milici
Motelsiren
Lauren Milici is a Jersey-born, Florida-raised poet and writer. She is the author of FINAL GIRL from Big Lucks Books. When she isn’t crafting sad poems about sex, she’s either writing or shouting into the void about film, TV, and all things pop culture.