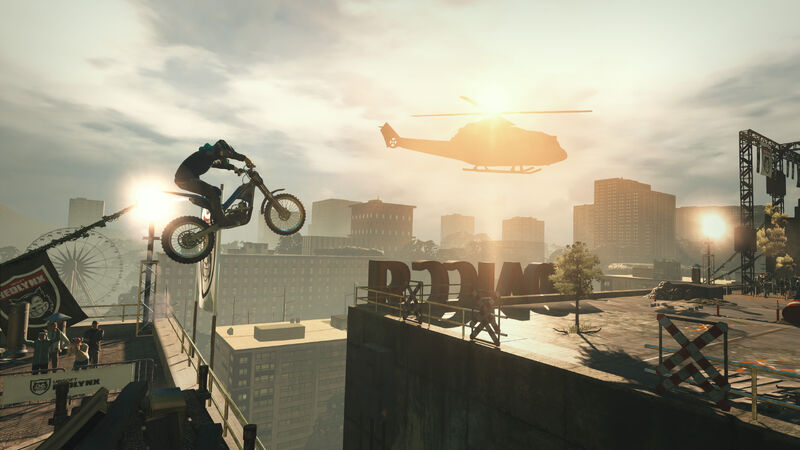 The rider’s body lays there, broken and misshapen on the tarmac. The crash should have been fatal – riding a stunt bike off an elevated jump, only to smash head first into the landing ramp and fall several storeys to the ground usually is. Instead, he’s twitching, shuffling with futility towards the next checkpoint like a puppet with half its strings cut, all while I laugh my head off. I’m not a sadist, but I am playing the new Trials Rising, the scene in question the aftermath of a particularly hilarious, if brutal, crash.

The Trials series has come a long way in the last two decades. After debuting as a Java game in 2000, Finnish developer RedLynx has evolved its physics-based stunt biking series into a fiendishly challenging but frequently hilarious phenomenon, testing players’ skills to the utmost as they navigate 2.5D tracks crammed with jumps, flips, and seemingly impossible obstacles.

While Far Cry crossover Trials of the Blood Dragon provided a satisfying diversion for fans – adding some basic puzzle-platforming and shooting sections into the manic motocross mix – the upcoming Trials Rising marks the first new core entry in the series in a half-decade. With its predecessor, 2014’s Trials Fusion, still enjoying a strong following, there’s a lot riding on the new entry – but a hands-on session at publisher Ubisoft’s offices reveals devotees have little to fear.

The biggest immediate change is to the main career progression mode. Taking a leaf from Forza Horizon’s book, it’s now set out as a world tour, with players selecting missions from locations from pinned locations on a map. Starting in the US, you’ll conquer challenges and move eastwards, with European and Asian levels proving increasingly tough.

It’s not just an endless grind through courses of escalating, maddening difficulty though. As you move through your career, you’ll unlock sponsor challenges, which unlock customisation items upon completion, and Stadium Challenges, which serve as a sort of boss fight in the form of a showcase performance level. These will test your Trials skills to the limit – I didn’t actually manage to complete one during the preview session. Thankfully, there’s also a “University of Trials” that you can dip in and out of to learn the game’s finer points, which proves far less frustrating than the mandatory skill tests that Trials Fusion threw into its level progression.

That failure revealed one of Trials Rising’s better upgrades – nothing is really locked away behind progression gates. Previous challenges can be returned to, new locations continue to open up, and there’s a degree of online persistence, where challenges you have completed will flag up when your high score has been beaten by a friend. There’s always something to do, without much sense of hitting a wall.

That social side is also evident in the new Tandem mode, where two players share control of the rider and bike. A fun twist is that control isn’t split, with one person controlling the bike’s acceleration and the other the rider’s movement in order to shift centre of gravity and make jumps – instead, both players control both features at once. It’s immediately chaotic, and incredibly fun – the gaming equivalent of a three-legged race, where shared co-ordination is the real challenge.

Overall, Rising is shaping up to be a fantastic evolution from its ancestor, but one aspect it fails to improve on is its level editor. It is, I’m told, the exact creation suite RedLynx uses in-house to create tracks, which is an impressive feature to add to a consumer end-product. However, as in Trials Fusion, it remains a daunting feature to wade into, presenting a mess of unexplained planes, layers, vectors and more, all without any form of tutorial or guide to help players create their own Trials experiences.

Much of the terminology and even visual language used is impenetrable to newcomers or anyone without a solid grounding in geometry, and the immediate complexity you’re confronted with – multiple spatial axes, distance guidelines, all different colours because… reasons? – is intimidating. Couple that with incomprehensible error messages when you place objects or marker points where they can’t go, and it’s likely to scare off a lot of players who might otherwise be captivated by the creation suite.

For better or worse, the editor is also bigger than ever, incorporating assets – obstacles, track elements, environments, decorative objects, and so on – from every previous Trials game. While these are grouped together under categories based on their native game, and players already accustomed to the general form of the editor from past Trials games will doubtlessly appreciate the variety, that’s a staggering amount of material to get to grips with, making an already overly-complex feature even more confusing.

Where the comparative creator mode on previous Trials games directed players to RedLynx’s YouTube channel for tutorials, there’s not even that scant guidance here on Rising, although this could easily be added before release. Yet even if it is, players shouldn’t need to leave the game and visit YouTube to figure out how to use a feature.

It all begs the question: how much control is too much to give players? Full studio dev tools are fantastically powerful pieces of software, and while here they offer a tremendously authentic experience, they’re largely bewildering to anyone without a basis in development themselves.

The steep barrier to entry is all the more baffling when compared to the all-new Rider Customisation tool. For the first time in a Trials game, you can decorate your Rider, changing base outfit, skin colour – with both real human skin tones and wild fantasy colours to choose from – and helmet, and then modifying everything with colour swatches and a wealth of stickers. Again, there’s no tutorial for this, but it’s far more intuitive, with stickers stretching, rotating, and morphing with easy to understand controls.

Rider Customisation is impressively versatile too, and with the inclusion of some truly strange helmets, you can create delightful monstrosities such as rainbow-coloured neon horse-headed avatars. The weirder the better too, as your Rider will be seen by friends and rivals when playing online.

Aside from the overly and increasingly complex track editor, Trials Rising is shaping up to deliver exactly what series fans would want of a sequel, while also proving accessible enough for newcomers. Its multiplayer shines, and the improvements to progression make it far less frustrating, without diminishing the overall challenge. Just don’t expect to be making too many tracks yourself, without a lot of study first.