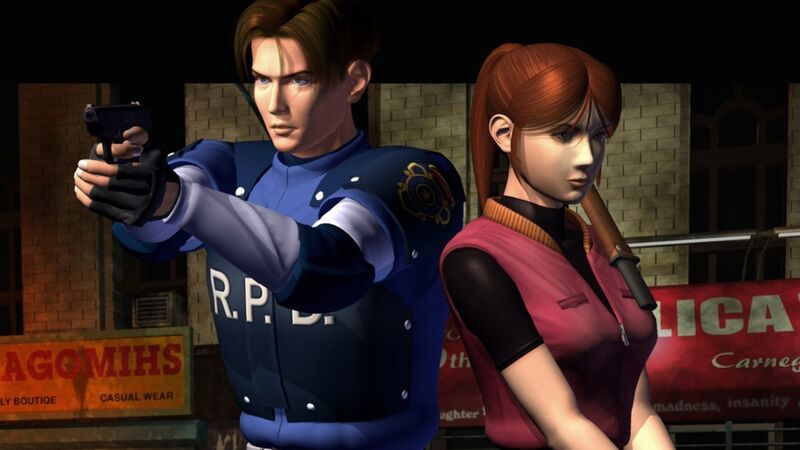 Twenty Years of Terror: A Love Letter to ‘Resident Evil 2’

It’s hard not to think of 1998 as something of a paradigm shift for videogames. It was the year in which Konami released Metal Gear Solid into the world. Valve followed that up with Half-Life. And from Capcom came Resident Evil 2, the follow up to 1996’s pioneering and staggeringly successful Resident Evil.

Core to this shift in perception of gaming was the release of the debut PlayStation, less than four-years-old in 1998, and the first home console ever to sell 120 million units. These were slick, ambitious adult games. The PlayStation was a cool, desirable piece of kit. What it wasn’t, was a toy. You could make the same claim for the aforementioned game titles.

Sure, it would take another three years for the so-far-PC-only Half-Life to make its way to Sony’s PlayStation 2, but the point remains; this was an era that did more to diminish the stigma that games were for kids than any other.

Capcom’s game, twenty-years-old this year – and with a thrilling looking, long-awaited remake being revealed at E3 – took the lead in spearheading this charge. In many respects, it was the perfect sequel. Resident Evil 2 – Biohazard 2 in Capcom’s home of Japan – was bigger; both in terms of the world it sucked you into, and the number of discs it came on.

It was bolder; if the first game eased you into the horrors ahead, its sequel threw you into the rain-drenched, fiery, fallen streets of Raccoon City, with less ammunition in your belt than the sum total of zombies that greeted you in the very first scene.

More importantly, it kept, and indeed took forward, the same sense of quality world building which had helped make the first game so successful. Pre-promoted by Capcom with the gusto of a film release – with advertisement’s directed by zombie movie titan George A. Romero!  – if the first game played with tropes of haunted houses and horror mansions, then fans of John Carpenter and his unrivaled run of late seventies and early eighties horror classics might have felt like they had visited Resident Evil’s locale of Raccoon City prior.

After you’d zig-zagged past the alarmingly numerous number of ghouls, through discarded school buses, only stopping to say hello to the late, great Robert Kendo, you arrived at the Raccoon City Police Department. Precinct 13 in all but name.

You could play as Claire Redfield, the sister of Chris from the first game, or Leon S. Kennedy, a rookie cop having a first day on the beat that – certainly by the time the series iconic Licker arrives in the RCPD’s narrow halls – really would have been better off spent staying in bed.

The game picks up a few months after the events of the first – Claire is en route to find her brother. Leon is reporting for his first day – and begins proper after an impressively cinematic opening animation, with the two of you separated, which you remain for most of the game. Whichever character you start with, you’re charged with making your way across the zombie-infested Raccoon City – though you are both joined by a number of debuting series staples at various junctures – trying to make sense of what the holy f***k has happened. Sadly, there are no actual racoons.

What there is instead, however, is a giant mutated crocodile who lives in a sewer and a quite frankly, repulsive, mega-sized moth, whom, even if you scrub your ears with wire wool for a week, you will never ever be able to remove the sound of its flapping wings from your cognitive functions.

If you beat the game with both initial characters, you get the chance to play a mission as Hunk, a masked special agent in the Umbrella Security Service and the franchise’s eternal gift to cosplay. If you beat that mission, you get the opportunity to play another mission as a huge block of tofu. Because why not, right?

The biggest innovation the game introduces is the ‘zapping system’, which allows you to switch between characters and explore the story from different perspectives. It was a device developed in the latter stages of the original game’s development, shelved, then developed further for the more ambitious sequel. It was an innovation that leant itself perfectly to the setting of Racoon City. Obviously super proud of their creation, Capcom has spent the last twenty years inviting you to explore it from a variety of perspectives.

2012’s third-person shooter, Operation Raccoon City, allowed you to play as one of twelve Umbrella sanctioned paramilitary mercenaries. The on-rails Wii shooter, 2009’s The Darkside Chronicles, takes you back into the cities bowels. Resident Evil 3 threw you right back in there, from the perspective of Jill Valentine – then, perhaps begrudgingly, blew it up at the end.

Take a trip to Raccoon City

Because here’s the thing. More than any enemy, more than Claire and Leon’s heroic pursuits, certainly more than that f***ing awful moth; Raccoon City is the star of Resident Evil 2. It’s why so many geeked out upon discovering some absolute champ had built the police station using the level designer featured within the recently released Far Cry 5.

It’s a huge reason why the game it sits within is so beloved. Spend some time in the S.T.A.R.S department of the police station, and you’ll see how impressive the game’s team were at storytelling. In bins, in desk draws, in filing cabinets; all unpeel layers of interesting, often resultingly emotional details about the people who work there, people who would go on to be the meat of this beloved franchise.

Sure, the police station was seemingly designed by a buffoon – no fear of any prisoner escaping the labyrinth sprawl of the RCPD, or indeed, any Raccoon City Police Officer ever finding a toilet – though there’s never been a more disturbing scene in Resident Evil history than the first time you encounter station chief Brian Irons. You’ll never look at taxidermy in the same way, that’s for sure.

Though production started on Resident Evil 2 just a month after the first game was finished, the sequel’s route to release was anything but simple. Directed by Hideki Kamiya, produced by Shinji Mikami, the latter having served as director on the original game, before there was Resident Evil 2, there was a game now commonly known as Resident Evil 1.5, an enduring curio amongst fans.

This version of the game would be canceled by Mikami when it was between 60% and 80% complete, according to varying reports, after the product created thus far was deemed inadequate. The main difference between that game and what saw mass release, can be summed up by that word again; ‘cinematic’. Inspired by blockbuster films and how music within them helped to convey changing moods and environments, Masami Ueda, Shusaku Uchiyama and Syun Nishigaki created a score for the game that was sometimes ambient, sometimes industrial, but always evocative of the desperation prevalent within the story.

Supervisor Yoshiki Okamoto was a man with a vision too; feeling 1.5’s ending was too conclusive, he proposed a more open ending, seeing – much like in the Bond franchise, or Japan’s native Gundam – that the game should present Resident Evil/Biohazard as a metaseries, creating a world in which many different stories could be told. Every comic, manga, cartoon and film that carries the Resident Evil logo? It was Resident Evil 2 that made that possible.

Expectations couldn’t have been higher for Resident Evil 2. Pre-release, Capcom’s sales targets for the game were said to be two million units sold. Five million dollars had been attributed to its advertising budget, and the hopes were for Resident Evil’s sequel to reach the flood of adults engaging with gaming for the first time. Twenty-years later, with over six million games sold – combined revenue for the Resident Evil films and games is said to stand at a whopping $5.222 billion! – it remains one of gaming’s most beloved, and indeed, pivotal moments. We’d say it met expectations.