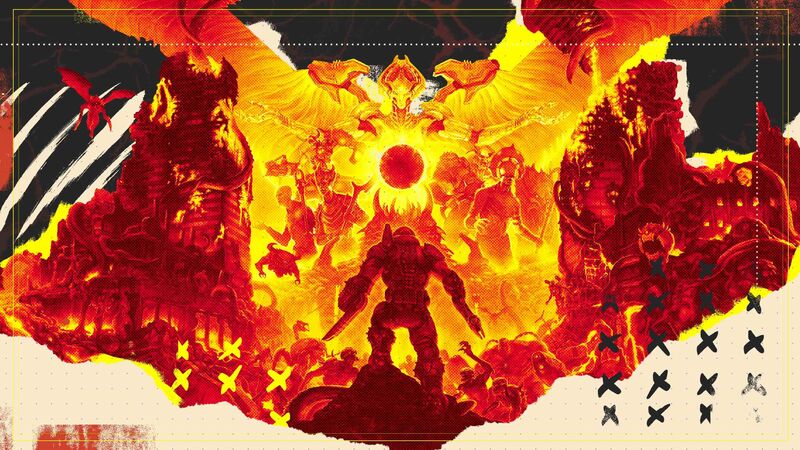 Video Games and Satan: We spoke to the Church of Satan about ‘DOOM: Eternal’

But you know who must be really looking forward to id’s follow-up to 2016’s DOOM (itself a reboot of the 1993 classic original, a game that it’s no exaggeration to say is the most influential FPS of all time)? Satanists. We’d bet our buttons that Satanists absolutely love a bit of DOOM.

“The DOOM series is a work of horror science-fiction and has nothing to do with Satanism directly,” says The Church Of Satan’s Reverend Raul Antony when we hit him up for a chat.

“Yes, there are various demons, pentagrams, and references to a Hell dimension, but that’s fairly standard horror fare. That doesn’t mean Satanists can’t enjoy the game, both in terms of the horror aesthetics and more importantly the competitive scene. We have members of The Church Of Satan who are professional gamers. We’re looking forward to DOOM Eternal…”

Established within San Francisco’s counterculture scene in 1966 by the late occultist Anton Szandor LaVey, the church moved to Hells Kitchen (obvz) in Manhattan, New York, in 1997. They continue to spread and follow their late leaders’ teachings to this day. Satanism is much misunderstood. The church doesn’t believe in the Devil in a traditional Christian or Islamic sense, seeing Beelzebub as a sort of avatar for the best humanity can be. For them, Satan is a positive archetype, who represents pride, individuality, and enlightenment.

For example, ask them if they worship Satan and they’ll reply thus, “No. Nor do we believe in the existence of Satan or the supernatural. The Church of Satan believes that religion can, and should, be divorced from superstition. As such, we do not promote a belief in a personal Satan.

To embrace the name Satan is to embrace rational inquiry removed from supernaturalism and archaic tradition-based superstitions. Satanists should actively work to hone critical thinking and exercise reasonable agnosticism in all things. Our beliefs must be malleable to the best current scientific understandings of the material world — never the reverse.”

Well, that’s us told. But no question, they’re a good bunch. And their online shop is amazeballs.

But if DOOM – a game about demons on Mars! – hasn’t got anything to do with the Church Of Satan’s understanding of Satanism, it’s worth asking; what videogames do?

“Satanism is a radical individualist philosophy that recognizes man as a highly evolved animal,” says Reverend Raul Antony. “It rejects the spiritual and the ethereal and embraces the material and carnal. Satan is a symbol, not a literal deity, representing the ultimate blasphemy: self-worship. Therefore Satanists would be attracted to media and entertainment that demonstrates individuals overcoming great odds or exerting their influence over their surroundings.”

“I would point to EVE Online as a game in which individual players can shape the outcome of entire economies,” he continues, “or using Machiavellian tactics can manipulate corporate relationships and reshape the political structure of the game. The players themselves are seen as ‘gods’, sending clones out to influence the universe…”

We’ll be honest, we’re never thought about EVE that way. But what about something you can boot up quickly and unwind with after a hard day doing Satanist things?

“Satanists tend to be very competitive and wish to excel at what gives them pleasure and satisfaction, so video games with a rich multiplayer component will attract Satanists from all walks of life,” continues the Reverend. “On a less mechanical but more thematic level than EVE, games like Far Cry 2 explore the philosophy of Nietzsche and the subjectivity of morality, which relates to Satanism.

Idle hands, and all that

“Satanism gives the responsibility to the individual to determine what they view as right or wrong based on their own rational self-interest,” he explains, “so long as it doesn’t harm anyone who doesn’t deserve it. One can see parallels between ‘The Jackal’ and Basil Zaharoff, the World War I arms merchant that sold weapons to both sides of the war and used the profits for philanthropy. Zaharoff is one of the people The Satanic Bible was originally dedicated to.”

A lot of this makes total sense. Satanism really is very misunderstood. What about games like DOOM that use Satanic symbols like you outlined earlier; do they not further the confusion about what Satanists believe?

“I think it depends on how far along the Satanist is in their understanding of Satanism and their own application of it,” our interviewee explains. “Some of our younger members, especially those that might have grown up in religious households, might see such explicitly ‘Satanic’ symbols as refreshing and exciting. It serves as a shock that helps them break from indoctrination. For most it’s not that deep, it’s just fun, like watching cheesy horror films. And for others, it’s boring and too on-the-nose, preferring more implicit entertainment that doesn’t immediately show its hand…”

And what about people – um – who think, ‘Oh, you know what’ll be interesting? If we get in touch with the Church Of Satan and get them to review DOOM Eternal for our website?’

“There are the occasional kooks who take such symbols literally,” he says. “It’s worth noting that anyone who claims to believe in and worship a literal devil is not a Satanist but a heretical Christian. Satanism uses the original meaning of the Hebrew word ‘Satan’, meaning an adversary or accuser, like the word ‘enemy’ or ‘villain’. It predates the Christian personification of the word in their mythology. Anyone that takes the lore of DOOM seriously in any way is beyond reasoning and rationality, so we don’t waste our time on that…”

Not for the first time, that’s us told. Hail Satan!