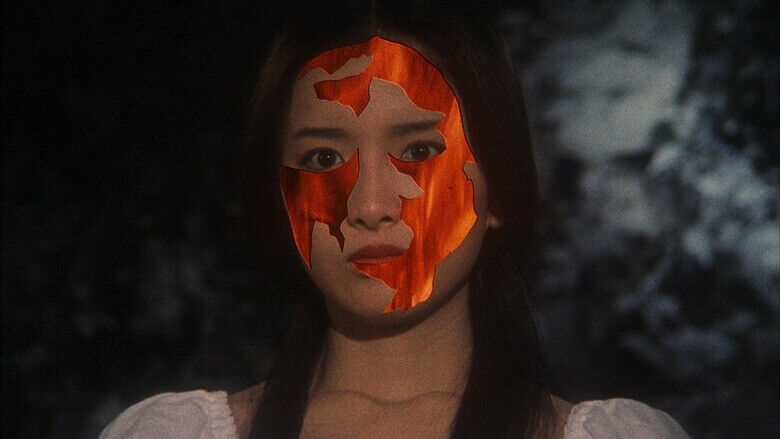 Part of the joy of being a fan is finding odd and obscure gems that you end up falling in love with. For every Star Wars, there is a Battle Beyond the Stars. For every Batman, there is a James Batman. Here at Fandom, we like to go hunting for some offbeat and off-the-wall films and television shows that might just become your own secret treasures. Strap yourself in and expect the unexpected, because this week’s Weird Watch is the 1977 Japanese horror film House. (Last Week: Lost River)

Most people assume that horror needs to be serious. Just think, what is more serious than fear? Laughing is supposed to be a happy emotion, fear is one of the least enjoyable emotions. Yet horror and humor are natural companions. They’re both dealing with the absurd, the unexplainable. Something unnatural or unthinkable is occurring, and whether one laughs or screams often depends on the execution. There’s something deliciously perverse about the line right between the terrifying and the silly. The reason clowns are so scary is because they’re funny. Think of it this way: it’s bad enough to get eaten by a monster, but what if that monster was laughing while doing it?

One of the earliest films to take advantage of the possibilities of absurdity as horror was House (AKA “Hausu” for those looking to avoid confusion with a lame American ‘80s horror movie or a FOX medical drama). It’s a 1977 Japanese film about a group of girls that enter a haunted house and one by one are devoured in increasingly insane ways. Despite being a hit in its time amongst teenagers, neither critics nor the studio who made the film understood it. They thought it was merely nonsense, nothing more. And nonsense House definitely is, but there’s a chilling factor to that nonsense which most adults of 1977 simply did not understand. They dismissed it, but today film fans consider House to be an obscure gem of wonderful weirdness.

House was created when Toho executives decided they wanted to make a movie like the American hit Jaws. Japanese rip-offs of Western films were not unknown in the ’70s. Just a year later Toei was going to make their answer to Star Wars, the unique Message from Space. However, it’s obvious Toho lost their way quite a bit from Jaws. For one, instead of a shark eating people, it’s random objects in a house eating people. And Spielberg would never again inspire a movie quite like this.

How did it happen? Well, the ’70s were a low-point in Japanese film. Toho, and large studios like them, had no idea how to adapt to the market share lost to television. The film industry lost a billion ticket sales over the course of two decades. As long as television was kicking their ass, Toho figured they would turn to Nobuhiko Obayashi, an experimental director of TV commercials to make their Jaws movie.

Obayashi, in retrospect, was the worst man they could have picked for the job. Instead of a generic monster movie, Obayashi turned to his young daughter for ideas. He felt the fertile mind of a child could come up with stranger and more terrifying concepts than the dull adult mind could. He might have been onto something. The final concept and script were so strange that Toho sat on the project for two years, unsure of what to do with it. Finally, they gave Obayashi an incredulous crew and let him create his vision as he wanted to.

The weirdness with House begins with the main characters. Each lead character is given a single defining trait. Rather than pretending that they have any depth beyond their lone feature, they are simply named after their role in the plot. Gorgeous is the pretty one and seemingly the main character. She gets her friends in trouble by leading them to the house of her elderly Aunt (named “Auntie”) for summer vacation. Prof is the nerdy girl with glasses. Fantasy is the lovelorn girl prone to daydreaming. Melody plays the piano. Sweet is cute and trusting. Mac loves to eat and is accused of being fat. And finally, there’s my favorite, Kung-Fu. Kung-Fu is the rare victim in a horror movie that can legitimately kick ass. She defeats killer logs and a killer telephone. The only characters with actual names are side adults whom the script could have easily removed.

Beyond the characters, the most memorable part of House is the special effects. Nobuhiko Obayashi wanted his movie to look deliberately unreal. His goal was to make effects that looked like they had been done by a child. So he jammed cartoon edits over the live action, throws around plastic puppets, and uses entirely unconvincing blue screen work. Painfully obvious matte shots are so frequent they have to be by design.

The most striking effect of House is a technique that Obayashi made up on the spot. He dumped blue paint on his actresses, essentially creating blue screen body paint. The parts not covered would appear as if they were floating body parts. Obayashi had no idea how the technique would look in the final product, but he seems pleased with the results. The disembodied limbs move in a dimension beyond our Euclidian understanding of reality. There’s a disturbing element to the special effects that House shares with few horror movies. The un-reality of them only adds to the sense that all logic and rules have been broken.

During the opening sequence in the “normal” world, Obayashi makes a deliberate point to show what sort of movie House hopes to be. Mattes, fades, and iris wipes are overused, along with even odder tricks. Gorgeous spins and in a rapid cut goes from school clothes to a casual dress. Her father introduces her to a strikingly beautiful woman who will be her stepmother, and the camera lingers on the actress in slow motion and soft-focus. It is as if this woman is so beautiful that she distorts light and time around her. Obayashi even filmed the scene through tiled glass for a warping effect while she walks. Seventies pop music covers daylight scenes. At one point the girls find themselves floating in the bright colors of a child’s book and then walk out of the background as it is revealed to be just a matte behind them.

If anything the editing becomes more traditional once the characters enter the haunted house and the world goes insane around them. But by that point, House does not need editing to be completely bonkers.

The main characters turn out to be shockingly dense in the face of something clearly being wrong at Auntie’s house. But the audience quickly figures out that Auntie is an evil ghost. Veteran actress Yōko Minamida all but winks at the camera in every single scene. You’re in on the villain’s own private joke of dramatic irony. While the girls are trying to figure out what happened to the first victim, Auntie teases us by playing with the girl’s eyeball in her mouth. Only Fantasy seems to notice that something strange is going on here. She finds a girl’s head where a watermelon was supposed to be. She sees Auntie leap into a refrigerator to dance with a plastic skeleton. Nobody else is willing to admit that anything is wrong even when their friend disappears for an entire day without explanation.

With a movie like this, it is hard to say that House goes off the rails at the hour-mark as it was never on rails to begin with. But this is where the film has its most memorable and surreal moments. Especially good is the piano death. Melody’s head floats over her legs while a killer piano devours them and laughs at how “naughty” the image is. A cat painting sprays gallons of blood through the house after Kung-Fu defeats it and has lost the top of half of her body to a killer lampshade.

House is the kind of film that you could spend hours on just by reviewing all the completely batshit things you saw while watching. It’s a movie to brag to your friends about. “Yeah, you’ve seen weird movies, but I’ve seen the giant head of Gorgeous pop out of a door frame to tease her surviving friends.” “I saw a comic relief character get turned into bananas… somehow.”

House is still not entirely without issues. For a movie that creates such a perfect tone of disturbing ridiculousness, for some reason, House throws in a straight comic relief character with the teacher, Mr. Togo. Mr. Togo spends the entire movie trying to get to the house in disappointingly normal comedy scenes. He’s ultimately pointless because he never actually reaches the house. Neither really is Gorgeous’s step-mother, despite all the special focus Nobuhiko Obayashi gives her with his camera. Yōko Minamida as Auntie is the best presence in the movie, which is a real shame when the film gets rid of her by having her possess one of the girls. The younger actress cannot muster up the smirking self-aware quality that Auntie had.

If the Monkees had wanted to destroy their career even further and followed up Head with a horror movie, House would have been it. It’s an exploitation nightmare of sight and sound with a raw energetic madness that constantly surprises you. Nobuhiko Obayashi does not come off as somebody who really knew how to make a feature film. His editing seems to be almost trying too hard early on, it has a quality of a wedding video. But by the time House hits its halfway mark, Obayashi found his stride, creating a totally different language for film. House is where the ridiculous was made horrifying, and the horrifying was made ridiculous.