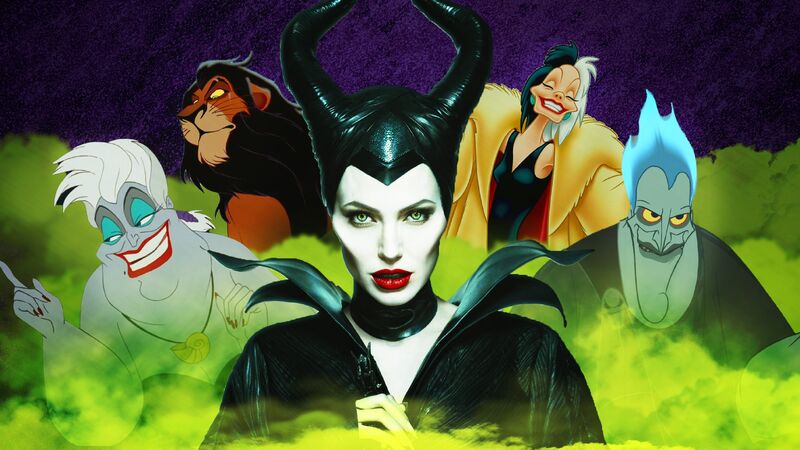 Who Is the Ultimate Disney Villain?

Mirror, mirror on the wall, who’s the greatest Disney villain of them all? With Disney+ finally available in the UK and Ireland, there’s no better time to revisit the darkest depths of Disney’s roster of antagonists. In our evil evaluation of the greatest Disney villains of all time, we’re considering charisma, musical numbers and live-action performances, as well as taking into account fan votes from our Disney community — and, of course, PURE SCARINESS — as we determine the most downright dastardly. Be prepared…

If She Doesn’t Scare You, No Evil Thing Will

Scariness is an essential element, if not the most important attribute, of a Disney villain. If they don’t pose a genuine threat to our heroes, then they’re not doing their job. If they invade our childhood nightmares, even better. When it comes to pure terror, the old school Disney classics definitely did it best. The Evil Queen from Snow White and the Seven Dwarfs, Maleficent from Sleeping Beauty, and Lady Tremaine from Cinderella make up the unholy trinity of formidable Disney women and set the bar for fear.

The image of the Evil Queen in Snow White transforming into an old hag has sent chills down our spines for over 80 years — because she represents the dark heart of Disney villainy. Consumed by bitterness and vanity, the film doesn’t allow her a single redeeming feature, nor musical number, nor comedic aside. Instead, she exists for one purpose – to poison Snow White’s innocence, and cause death and decay. This is made all-the-scarier through the way she works to achieve her goal, emerging from the shadows in disguise as a vulnerable old woman. Not only is she rotten to her core, but she’s capable of deceiving our heroine into inviting her to her front door.

Maleficent follows in a similar tradition, demonstrating terrifying power, wit, and deceit in order to tear down beauty and innocence. Lady Tremaine could be the scariest of the three, however, as she replaces magical powers with psychological torture, getting her kicks from keeping Cinderella in the dirt. We could write a whole essay on the problematic depiction of female rivalry in the early Disney movies, but for now, let’s leave it at this – these evil queens are unmatched in their levels of scariness.

Honorable mention for pure fear factor also goes to Claude Frollo from The Hunchback of Notre Dame, who is arguably the darkest of all the Disney villains, both psychologically and in his ungodly actions. More on him later.

After all that talk of terror, it’s time to lighten the mood. Or at least spice it up. While some Disney villains live to scare, others thrive on their charisma, cracking jokes and strutting their way through 90 minutes of hamminess. In more recent decades, it has been Disney tradition to add comic relief to the villain role, while still keeping the sinister side intact. We do see a glimmer of a sardonic attitude from earlier villains, but the tongue-in-cheek trend kicked off in earnest with Ursula the sea-witch from The Little Mermaid.

Ursula’s intentions and actions are similar to Disney’s early villains. She longs to claim ultimate power by tearing down the younger, prettier woman – but she does it with such bravado that you can’t help but cheer her on. Just a teensy bit. She does not, to use her own words, “underestimate the power of body language,” slinking around her underwater lair like the most fabulous drag queen. Similarly, to the more recent Mother Gothel from Tangled, and Cruella De Vil from One Hundred and One Dalmatians, Disney has evolved their manipulative female villain into something sassier, but no less scary.

However, let’s not confine the quality of sassiness to the women. When we asked our Disney community who their favourite ’90s or ’00s Disney villain was, the two highest scorers were Scar from The Lion King and Hades from Hercules. Both of these characters are known for an acerbic wit and deadly charisma that makes them more memorable than their heroic counterparts.

Jeremy Irons’ portrayal of Scar is punctuated with chokingly dry one-liners (“I’ll practise my curtsey”), which perfectly contrast with Simba and Mufasa’s earnestness. For Hades, James Woods delivers the god’s lines like a stand-up comedian. He’s an exasperated, straight-talking showman, arguably the funniest of all the Disney villains. Who can forget when he had to stop mid-evil plan, realising that his own minions were wearing Hercules merchandise? Kills me to this day.

What Disney villain showdown would be complete without a song contest? Most Disney films are musicals after all, and the villain numbers are often the most iconic. When we asked our Twitter followers and Disney community what their favourite Disney villain song was, a few tunes rose to the top of the pile.

Unsurprisingly, the most popular was ‘Be Prepared,’ Scar’s rallying cry from The Lion King, with 36% of fan votes. Apart from being a complete earworm, this musical number epitomises every aspect of Scar’s personality. He loves to take centre stage, he’s superior to his followers, he feels entitled to power – and he does love a menacing strut. Tim Rice’s lyrics perfectly blend comedy with darkness, ushering in Scar’s evil dictatorship:

The future is littered with prizes
And though I’m the main addressee
The point that I must emphasize is
You won’t get a sniff without me!

The second most popular song was Ursula’s ‘Poor Unfortunate Souls,’ which really started the tradition of Disney villain musical numbers as we know them. True to her sizzling style, Ursula owns the room – or, should we say, sea cave – with her persuasive song, putting on a cabaret performance that coaxes Ariel into a deal she can’t refuse. The climax, where Ursula steals Ariel’s voice, builds up to an atmospheric crescendo, making you almost want to applaud in spite of yourself.

One song that has a fierce fanbase, cited several times by our community, is Frollo’s ‘Hellfire‘ from The Hunchback of Notre Dame. As we’ve already established, Frollo is one of Disney’s darkest villains, in a surprisingly sinister film. Dealing with far more adult themes than many Disney movies, Frollo’s darkest desires are dragged out of him in this hellish theatrical number.

As he sees Esmerelda dancing in the flames, he desperately tries to contain his lust, which turns to dangerous hatred. The heavy, sinful atmosphere is punctuated by a church choir chanting in the background, acting as his moral persecutors. It’s hard to image that lyrics like “Destroy Esmeralda / And let her taste the fires of hell / Or else let her be mine / And mine alone” would make it into any Disney film now. But I guess we’ll wait for the live-action reimagining.

Before we move on, we need to give honourable mention to a few more numbers. Mother Gothel’s ‘Mother Knows Best‘ from Tangled combines wonderfully venomous lyrics, a saccharine-sweet melody, and a powerhouse vocal performance by Donna Murphy, making it very popular with our Disney community. Meanwhile, ‘Gaston‘ from Beauty and the Beast is a hilarious take on the beer-drinking song.

‘Cruella De Vil,’ whilst not sung by the villain, stands on its own as an excellent swing style diss track, permeating pop culture with countless covers. Finally, Dr. Facilier’s ‘Friends on the Other Side‘ from Princess and the Frog was frequently cited by our Disney community — it’s unique in its jazz-inflected sound and showman’s performance. Personally, we think Jafar’s ‘Prince Ali (Reprise)’ deserves more love, if only for his impressive maniacal laugh.

While some Disney villains only take an animated form, some have broken into the ‘real’ world, through live-action remakes. From Cruella De Vil, to Lady Tremaine, Jafar, Gaston, the Queen of Hearts and Maleficent, who did it best?

Angelina Jolie’s Maleficent is one of the strongest live-action Disney villain performances. She embodies the magical grace of the character, reminding us that she’s first and foremost a dark fairy. Her version is much more sympathetic than the 1959 version, growing to love Aurora like her own daughter  – but she doesn’t sacrifice the villain’s confidence and power. She has a heart, but she isn’t to be messed with. Her performance has revitalised the character, making her the most popular classic with our Disney community, with 37% of the votes.

Another iconic live-action villain is Glenn Close’s deliciously maniacal Cruella De Vil.  Her performance is as exasperated as it is extra, her inner rage barely concealed under her glamourous furs. Chewing the scenery with cartoon-like craziness, her put-downs are unmatched. Not only does she throw completely unveiled insults at Roger, but when Anita tells her she’s having a baby, she responds first with “you poor thing,” then “accidents will happen.” BRUTAL.

Luke Evans also deserves praise for holding his own as Gaston in 2017’s Beauty and the Beast, playing the brutish, vain scorned lover with gusto, and an impressive set of pipes. Cate Blanchett’s portrayal of Lady Tremaine in 2015’s Cinderella is equally masterful, giving more complexity to the character while retaining her intimidating grace.

Having considered scariness, charisma, musical prowess, live-action versions, and your votes, it’s time to come to our deadly conclusion. Our top 5 Disney villains are…

Hades emerged as our Disney community’s most popular villain of the 1990s – 2010s, propelling him into our Top 5. His fiery temper is matched by his dark, dry sense of humour. His disdain for everything around him, including his hapless henchmen Pain and Panic, make him one of the funniest villains. Even when Hercules manages to fight his way out of Hades’ series of traps and Hades is consigned to the Underworld, his screen presence is to die for.

Cruella is a true legend of the Disney villain catalogue. With possibly the most unforgivable motivations of all the villains – she literally wants to skin puppies – she is deliriously evil. However, her venomous insults and sickening style make her magnetic to watch. That, and you can’t help saying her name without breaking into her eponymous theme tune.

The Lion King is the linchpin of ’90s Disney films, and that’s in no small part down to Scar. When we asked our community to tell us their favourite Lion King character earlier this year, Scar was a favourite, getting more mentions than Simba himself. With an iconic musical number, killer put-downs, and an evil plan that almost succeeds, Scar is not only an extremely effective antagonist, but he might just steal the movie. Even if his 2019 version is a little less charismatic.

Now titled the Mistress of Evil, Maleficent has always lived up to her name. Historically the epitome of wickedness, her magical powers make her one of the most formidable villains. Her new, more sympathetic backstory adds to her myth, giving her more room for growth as an anti-hero. Maleficent’s ability for both evil and good is seemingly limitless, which makes her a fascinating villain and one of the greatest.

This really was a tough choice, but this sea witch is just too perfectly villainous to ignore. With an abundance of charisma, an excellent song, abominable intentions, terrifying powers, and a high score in our community’s favourite villain poll, Ursula has clawed her wicked way to the top of our ranking. Her sinister swagger ushered in a new generation of Disney villains that completely steal the show – long may her reign continue.

Do you agree with our ranking? If you want to argue the case for your favourite Disney villain, head to our Disney community and join the conversation.