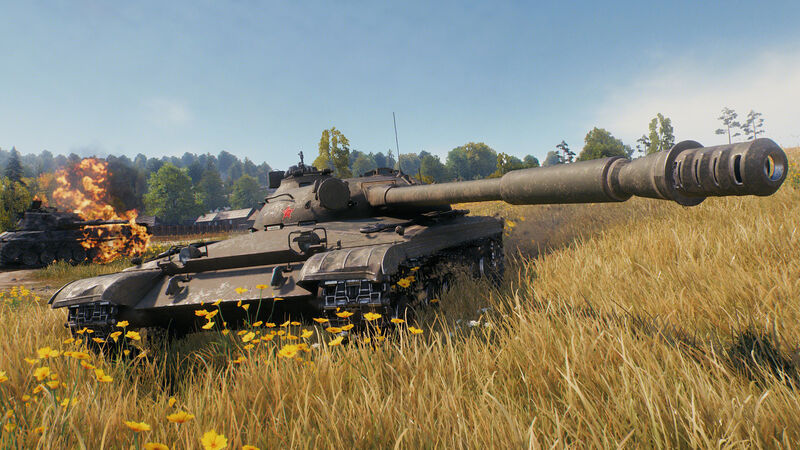 Eight Years After Launch, ‘World Of Tanks’ Is Finally Worth Checking Out

Whether it’s glimpsing an art style that rubs you up the wrong way or simply seeing a set of systems that don’t look like your thing, it’s all too easy to be completely put off a game with a mere glance. This is exactly what happened the first time I saw World of Tanks.

When it launched back in 2010, this multiplayer military sim promised players a unique world of slow-paced, free to play, tank battling. If there was ever a string of buzzwords tailor-made to put me off an experience, it turns out, it’s those ones.

Still, in spite of my (and many other Western gamers’) snobbery, World Of Tanks has gone on to become a genuine gaming phenomenon. In the eight years since it first rolled its way onto PC, this historically accurate tank ‘em up has managed to enlist a jaw-dropping 160 million players to its blocky-battlefields.

To put that into perspective, all-conquering battle royale darling Fortnite currently ‘only’ boasts 45 million users. In other words, World Of Tanks is one of the most played online games in the world. The question is then, why are so few people talking about it?

Well, despite its massive success in Eastern Europe, Wargaming’s MMO juggernaut has yet to successfully invade Western Europe or the US. Now, though, with its latest update, the war-loving developer is hoping to finally make a real impact on the other side of the pond.

Despite being free to download on PC and console for almost a decade, its creators Wargaming claim that the tank-driving sim has actually only been a work in progress; until now.  Recently redesigned for the HD age, a new trailer for the recently released Version 1.0 update shows a World Of Tanks (WOT) that looks like a far cry from the game I saw all those years ago.

A  Whole New World (Of Tanks)

Lured in by the promise of a shiny new engine and a desire to pinpoint why exactly WOT is such a huge success, I decided to speak to Wargaming and see whether this new and improved iteration of World Of Tanks is finally a game that’s ready to break the West.

The first thing worth noting about World Of Tanks 1.0, is that it really has been given one hell of a makeover. While it still lacks the polish to be the kind of Battlefield-beater Wargaming is trying to sell it as, this once visibly aging MMO now looks like a thoroughly modern gaming experience.

Where the game’s theatres of war were once flat and lifeless, they now curve and meander, with vastly improved textures and newly added flora giving the hilltops and forests players roll over a new lease of life. The once small-scale battles are no longer players’ only option here either, with recently added sprawling skirmishes three times the size of the standard battles really shining on the new and improved engine.

It’s impressive stuff visually, but it’s not just your eyes that will notice an improvement here. Thanks to a rousing new score performed by the Prague Philharmonic Orchestra, lining up your shot and slowly obliterating that pesky Panzer player from the other side of the map has never felt so epic.

Given how generic the game once was, this much needed aural and aesthetical makeover goes a long way to transforming what used to be fairly bland free to play game into an experience that’s (almost) ready to compete in the same league as the big boys.

“What we tried to achieve with 1.0 is to give players new experiences and attract more newcomers with something that’s up to the standards of 2018.” Explains World Of Tanks‘ Creative Director, Andrei Biletskiy.

“[The old engine] was not exactly built for these kinds of games. So, we were trying to adapt it and evolve it, mutate it, mutilate it. It wasn’t easy.”

Biletskiy continued: “The new engine means we can expand and grow into directions we were never able to think about before. Is it possible for us to provide more visually rich experiences, more Hollywood-like experience? Definitely, yes. We’re just getting started.”

For those who gave it a shot at launch on either PC or even back on the Xbox 360, the core gameplay hasn’t actually changed that substantially. Unlike the fast-paced shootouts of Counter-Strike or Rainbow Six Siege, WOT is still a far more tactical affair, but now thanks to its new dramatically larger battlefields, the scale of each skirmish requires players to think twice before firing their first shell.

It’s this chess-like dynamic that has made it a hit with an older audience, with Wargaming proudly stating that it has a huge number of devoted players that are in their 60s, 70s and even 80s.

It turns out history buffs and tank fanatics aren’t the only ones who are getting something out of the massively online military game though – politicians and royalty are also sneaking away from their duties to blow up their mates.

“Several ministers of defence in different countries are playing our game. Probably the most interesting player from my perspective is the King of Jordan.”

Sadly though, I didn’t get the chance to pwn any politicians or wreck any royalty during my play sessions. Speaking of play sessions, this is definitely a game that comes into its own if you’re playing with friends. While I found myself feeling a bit indifferent towards the game while playing solo, after teaming up with a squad, World Of Tanks really started to click with me.

Here, simply rushing in to meet your enemies head-on is suicide. Instead, victories are earned by seeking out the best vantage point, spotting a slew of tanks on the horizon and calling out the enemy position to your teammates before closing in and raining down shells on an unsuspecting troop of tanks. Once I began talking tactics as part of a team, the appeal of WOT became immediately clear.

The Elefant In The War Room

Yet it’s not all good news. The biggest issue many players have with World Of Tanks is one that’s barely changed since 2010 – its huge reliance on game-breaking in-app purchases.

Instead of going the Overwatch route and allowing players to simply purchase cosmetic items for the character that don’t interfere with the core gameplay, World Of Tanks allows players to purchase the automated killing machines themselves. With certain vehicles only available to premium users, it’s an issue that’s managed to irk even some of the game’s most devoted players. When we grill Biletskiy, however, he insists that these are problems the team are constantly ironing out, attempting to make sure that players who cough up the cash have no real advantage over those battling for free.

“At Wargaming we have a philosophy we believe in very strongly, that’s what we call free to win. Kind of the rule of thumb that there is, nothing that is purchasable should be a requirement in any situation.”

“Basically, the principle is never make anything like that a requirement. Never make having something, having this amount of ammunition, being able to ship a big, new high explosive by subcalibre shells, whatever, as a requirement or running a premium racket. It never should be a requirement. Every purchase should be done for, let’s say cutting of time, this is the main reason to do something, or being lazy.”

When asked how having an entirely different vehicle to another player can be fair, Biletskiy had this to say: “You are buying something that you can collect, it’s like [getting] a differently coloured space marine for Warhammer, it’s just different. It’s not better or worse, just different.  This is a main element of course, do not sell victory for money.”

It’s an interesting approach to in-app purchases, but ultimately it seems that Wargaming understands that being too greedy and making tanks too unbalanced will ultimately turn away players and affect their bottom line.

This new engine is of course, something console players will get to experience too. While a shiner exterior obviously helps to keep WOT competitive with other online console experiences, Wargaming has also included an exclusive single player campaign for console players called War Stories. Written by the legendary comicbook writer Garth Ennis (of Preacher fame), this comic book style collection of short stories adds an extra layer of depth to the standard multiplayer experience.

It’s a fun (and most importantly, free) addition to the overall experience, but largely the four hour long War Stories serves as a good way for newbies to get to grips with the game and learn their Panzers from their Elefants.

World Of Tanks may not be a totally new game then, but given the overhaul it’s had, it’s damn close to one. While I still left feeling a bit wary about the game’s premium tank purchases, there’s an undeniably enjoyable and unique multiplayer experience waiting to be played here. And now that it finally looks like the kind of gaming experience modern players expect, it definitely deserves another look.

It might not replace Western multiplayer mainstays like PUBG or Overwatch any time soon, but if you want to obliterate some enemy vehicles online with your mates, World Of Tanks offers some surprisingly compelling tactical team based thrills without costing you a penny.