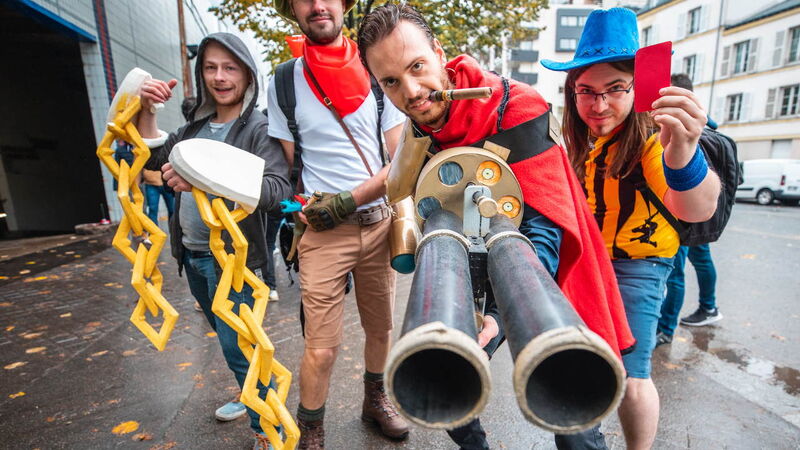 How Worlds 2019 Became a Pop Culture Moment Through Louis Vuitton

Last year, more people watched ten players duke it out on Summoner’s Rift than they did the Super Bowl. That League of Legends event was the record-breaking Worlds 2018 final between Invictus Gaming and Fnatic, which pulled in a whopping 99.6 million unique viewers. Whilst Riot hasn’t quite crunched the numbers just yet, StreamHatchet claims that there were 100 million hours watched over the course of this year’s championships, an effective comparison to last years 59 million, which was spread over Twitch and YouTube.

It is one of the most-watched sporting events in the world, but its athletes dwell in the digital realm, embodying cartoon avatars with absurd skills.

We were out in Paris last week at Worlds 2019 to catch the grand final between Europe’s G2 Esports and China’s FunPlus Phoenix. While we were ringside watching the show, the match broke Twitch’s viewership record, reaching 1.7 million concurrent viewers. This surpassed even the curious global phenomena of Fortnite’s black hole event. The match was a bit of a letdown, a stomp on Europe’s home court from FunPlus Phoenix, who deservedly took the championship from under the feet of G2 Esports.

Before the match, most of the people we spoke to were confident in G2’s abilities and thought they were a shoo-in to take this year’s grand slam, a feat not yet achieved by any team in League esports. G2 had won both the LEC Europe splits and the Mid-Season Invitational, but even the pundits got it wrong as FPX’s Doinb and LWX successfully unravelled their European opponents and battered them 3-0.

Yet it wasn’t the gameplay of Worlds 2019 that interested us the most about this year’s show, it was the metaverse that has started to envelop this annual occasion; the sponsorships, virtual bands, and roaring crowds who arrive in force to support it.

In 2018 we saw Riot delve into the music industry with K/DA and ‘Pop/Stars,’ a K-pop smash hit with an incredible sense of style. The band is made up of talented musicians masquerading as League of Legends champions. American singers Madison Beer and Jaira Burns, as well as Miyeon and Soyeon of Korean powerhouse G-IDLE, embodied League champions Evelynn, Kai’Sa, Ahri, and Akali.

Its success speaks for itself, with the song topping the Billboard World Digital Song Sales charts. It has 283 million views on YouTube as of writing. The project has inspired cosplay, champion skins, and an in-game alternate realm where players’ favourite heroes get the chance to become musicians.

This expansion into the real world has blurred the lines between digital avatars and reality, and now we have fans clamouring for a full K/DA album and arena tour. If the metrics are anything to go by, they certainly have the audience for it. As they say, if it ain’t broke, don’t fix it.

“The success of K/DA was a phenomenon,” Monica Dinsmore tells us, who is head of publishing for the LEC esports division based in Berlin. “Being able to evolve that is special. We’re mingling the stories and the lore behind the champions and bringing them to a place where you can identify and then interact with them in real life.”

K/DA and True Damage reside in the same universe, and player identification with these stars is crucial to Riot’s mission. “It’s just a true expression of how fans relate to the game, and even if you don’t play you can’t deny that,” Dinsmore adds.

Dinsmore told us that Riot is seeing great success with these kinds of exploratory mediums of expression, where players are reflecting how they feel about the game and expressing it in their daily lives via fandom, merchandise, and style. It’s offering players a way to express their enjoyment for League of Legends in a way that everyone can understand, which is a win for both Riot and the player.

If you don’t play MOBAs it would be hard to parse why somebody likes the champion Ekko so much for the way they fit their playstyle, but if you show somebody California rapper Dckworth performing onstage as that avatar, it becomes palatable, and it becomes easier for newcomers to feel a part of the zeitgeist.

It’s a bold tactic but when True Damage took the stage last week it lit the Accorhotels Arena up. The packed-out stadium was bouncing with cheers and admiration as fans watched Becky G, Keke Palmer, Thutmose, Soyeon, and Dckworth perform the song GIANTS, which is split by section to focus on each performer’s abilities and by proxy, the champion they’re trying to embody.

When we sat down to view the show, we noticed huge see-through fabric screens that covered the competitive area, rigged up and in the testing process with the words ‘Holonet’ adorned across the middle. Holonet is the augmented reality technology that powered the opening ceremony and specifically shone when True Damage took the stage. Their League of Legends avatars were layered over the performers with visual effects enhancing the prowess of each scene.

Thutmose as Ekko appeared to blink across the screen much like his in-game character, with holographic versions of the rapper appearing at absurd angles, the Holonet blocking his human form from view and creating an optical illusion. It was a fascinating thing to behold that raised questions about the future of live performance. To my left was a row of crew members linked to the stars who were recording parts of the performance and cheering them on, as can be seen in this behind the scenes video which delves into the setup for the GIANTS performance.

The song hasn’t quite proven to be the breakout hit that Pop/Stars was, with a modest 21 million views so far. But the performance was easily more convincing than 2018’s effort, which had uncanny 3D-rendered models of the League champs appearing on stage alongside the artists in cosplay.

As the song progressed, Becky G as Qiyana appeared within an augmented reality Louis Vuitton branded ring, her in-game character adorned in a prestige skin designed by the atelier. This brings us onto the second prong of Worlds 2019’s push into the real world. Louis Vuitton’s iconic symbolism was never too far from your eye line during the competition. An unbelievable collaboration to many, the fashion house even provided a set of special LV x LoL watches to the winning team.

Romain Bigeard works in the business development wing of Riot’s esports operations in Berlin, and we had the chance to sit down with him for a quick chat about the collaboration. Bigeard was still in full costume from the day’s event, where he had dressed up as an in-game champion, though the design was given some French flair thanks to a staff made out of a baguette and a croissant.

The trophy case for this year’s Summoners Cup was designed by Louis Vuitton, and there’s a complementary capsule collection on the way from Nicolas Ghesquiere, an Artistic Director at the company. The partnership is not just focusing on Worlds 2019 either, it’s a multiple-year deal that will most likely span more competitions and potential cultural crossovers.

“This kind of partnership touches every single unit in the company,” Bigeard tells Fandom. “A renowned brand from the luxury world coming and meeting in the middle with video games? That would have made no sense 20 years ago.”

Bigeard tells us that the reason unpredictable collaborations like this are starting to go ahead is due to the metrics that esports events can provide. “We have a true international ecosystem with 13 regions battling one another, ending in a world championship,” Bigeard says. “It gives us a global reach within a young demographic.”

Channels like Twitch, YouTube, and Twitter (the main ways in which brands reach young people) are often dominated by discussion around games. It starts to make a lot more sense when you think about how these modern communication avenues are gaining on the old guard.

“I think TV, radio, and print are losing ground when it comes to a younger demographic and the marketing world is left wondering how to reach them,” Bigeard explains. “Video games and specifically esports are providing good answers to that, and in turn, it helps us become more legitimate. It makes sense from a business perspective.”

Bigeard tells me that this new wave of sponsors are “non-endemic” in comparison to the previous wave, which were mostly physical items connected to the game like chairs, tables, computers, and peripherals.

Both Sides Legitimising the Other

The European wing of Riot’s esports contingent struck a deal this year with DXRacer – an endemic sponsor who make gaming chairs – but also Foot Locker for merchandise, and Beko, a global home appliances brand that pushed its ‘Eat like a pro’ marketing campaign. These other non-endemic sponsors are starting to prove their worth in the market. With the success and strong fan reception surrounding Riot’s partnership with Louis Vuitton and the musicians behind True Damage, it’s clear there is a tangible return on investment in building foundations outside of the digital realm.

The crucial factor is legitimisation and the current gulf which is narrowing between traditional sports and esports. We don’t bat an eyelid when Coke or McDonalds sponsor the FIFA World Cup, but if they jumped into bed with a videogame many would still tut at the implication. We asked Bigeard about how this new wave of sponsorships and legitimisation would help chart Riot’s course in the future. “The esports team is transitioning from a marketing department to a full business unit able to generate revenue and create great reach,” Bigeard told us.

League of Legends‘ reliability as a game that retains its players year-on-year is the secret sauce behind Worlds 2019 and its luxury sponsorships. The reason why Bigeard and his team can assure big brands that the interest is not yet fleeting is because they have a fervent player base who are begging for ways to experience the wider world of League of Legends beyond the comfort of the launcher.

“We are looking forward to 2020 and beyond because we now have a project (League of Legends), which from an esports perspective is sustainable in the long run,” Bigeard adds. “It changes the way you create events. We know where we’re going to be in 2020 and 2021 where years ago that would have been too much of a risk.”

With three new games on the way, an animated series in Arcane, and plans to develop their metaverse music industry, it looks like the humble world that Riot created a decade ago is going to open up even more. The digital avatars and their backstories will bleed into the real world further with each passing year, backed up by esports metrics and the fans wearing their merchandise. It paints a brazen picture of the future of esports but also video game marketing general, and it’s not like it’s just Riot taking part in the push.

The most recent example has to be Monster Energy, which has made its way into Death Stranding with little pushback. The gaming world is starting to accept and embrace its cultural legitimisation thanks to these stars and brands. Just watch the reaction as Keanu Reeves took the stage to announce his role in Cyberpunk 2077. Seemingly, this uncanny future has already arrived.