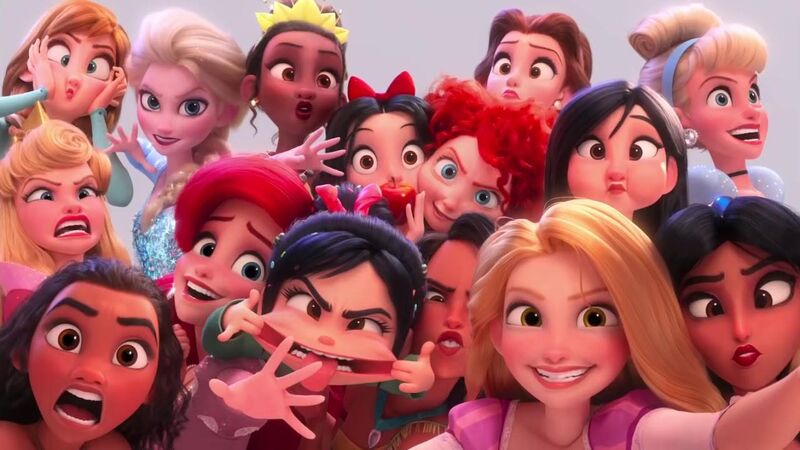 Could ‘Wreck-It Ralph’s Vanellope Be the 15th Official Disney Princess?

SPOILER WARNING: The following article contains spoilers for Ralph Breaks the Internet. Proceed at your own risk.

Ralph Breaks the Internet has caused a stir, not least because of its awesome Disney princesses scene. Glimpsed in the trailer, we see the 14 canonised Disney princesses assemble inside the internet to help Sarah Silverman’s Vanellope von Schweetz – Sugar Rush racer and BFF to John C. Reilly’s Ralph – in her mission to save her game, and her home. Coming together with the Avengers-style team-up, which includes (deep breath) Pocahontas, Anna, Elsa, Ariel, Moana, Cinderella, Aurora, Jasmine, Merida, Rapunzel, Belle, Snow White, Tiana and Mulan, does this make Vanellope the 15th official Disney princess?

Here’s what director Rich Moore told us: “The smoke has not come out of the chimney yet but we think so and we are going to make a play for that. We’re going to campaign hard to whoever that group is.”

The group he’s referring to is the mysterious assemblage of people who decide princess canon.

“There is kind of a pantheon that is agreed on by some powers-that-be and [co-director Phil Johnston and I] always joke that it seems like the Vatican or something,” says Moore. “That these people go into a room, and smoke comes out of the chimney, and they say, ‘Moana is now a princess’.”

With 14 official Disney princesses in the canon, of course – and now a possible 15th who may or may not need some royal connections to qualify – there are some glaring omissions.

“God bless the Internet,” says Moore. “The people on Twitter and social media that were saying, ‘Well, where’s Kida from Atlantis and where’s Esmerelda from The Hunchback of Notre Dame? They’re princesses too’. But we said we’re going with the official canonised Disney princesses because there are so many characters.”

So were there any that the directing duo might have liked to have included that were excluded because of the strict adherence to canon?

Rich Moore cites Meg from Hercules, Kida from Atlantis and Eilonwy from The Black Cauldron, while Phil Johnston will only say: “I wouldn’t put any others in there. I like what we’ve got. If I’d wanted other ones, I would have put ‘em in there.”

In the already-famous scene, we see said princesses ditch their gowns for more contemporary and entirely more appropriate casual clothes, which has led to a flurry of cosplayers copying the look – before the movie even came out.

“Isn’t that great?” says Rich. “[Fans] can actually cosplay at Disneyland without having to Disneybound the costume. They can wear those costumes and not be accused of wearing a costume.”

The film has drawn praise for addressing the controversy surrounding the representation of Disney princesses as damsels in distress, and needing a man to swing in and “rescue” them. Switching up their clothes was one obvious way for Moore and Johnston to make their point. Johnston explains what they were trying to do with the Disney princesses’ appearance in the film.

“Really, what we were trying to do was satirise their stories a little bit but with an abiding love for those [original] films and those characters, and really just poke at the odd things about their journeys, about their stories, which are all really crazy,” he says. “They overcame so much. It’s Rapunzel that says, ‘Do people assume a big strong man had to rescue you?’ Because in the case of most of them, other than some of the very old ones, they were very empowered women with great agency, and the assumption is that they were helpless women in need of rescue. So, that’s at least part of it — not to mention the scene exists so it can propel Vanellope in her story and lead her to her dream, and sing her Alan Menken song, and, you know, get to a place that she wouldn’t have been had she not met them.”

It’s interesting to note that when the princesses return at the end to help Vanellope save Ralph, they do it together, completely upending the trope of the solitary man sweeping in to rescue the damsel. Johnston explains the thinking behind this: “If we want to really deconstruct the notion of feminism, then the ego is not as massive as needing one person to take [on the role of rescuer]. It’s a community, and it’s as profound and as for-the-good-of humankind [as it can be]. You simply want to do what you can to make life better, and so the 14 of them coming and doing it as a collective is a selfless statement of love for humankind.”

It’s also great to see women working together when they’ve historically been pitted against one another. Both directors nod in agreement. With the popularity of the Ralph Breaks the Internet iteration of the Disney princesses currently in itself melting the worldwide web, can we expect to see Moore and Johnston helm a spin-off movie featuring the canonised 14 (15)?

“It does seem like an idea that everyone asks us about and it seems like a movie someone could make but I ain’t that guy,” says Johnston. “I think a woman should make that movie. 100%. And now I’m gonna dig a grave if a woman doesn’t make it. But I think that is a film that should be made by a woman.”

Any ideas who that woman should be? Since you ask…

“Well, let’s see. Pam Ribon was a big influence on that scene. She’s the co-writer with me,” suggests Phil. “Josie Trinidad is our Head of Story – she’s amazing.”

“[Kira] was one of our lead animators on the movie and she went into this film not knowing that that scene was going to be in the film. And she loves the Disney princesses – Ariel inspired her to become an animator after seeing The Little Mermaid. And when she found out that we were having a scene with all 14 of them she was like, ‘Oh, my god. Never could I have imagined in a Wreck-It Ralph movie that you’d have all the princesses and I get to supervise it. What kind of lottery did I just win?’ So I think she would be fantastic. If ever there was a case for an animator to become a director it’s this.”

If the film does materialize, we’re hoping for C-3PO to show up and reprise his Ralph Breaks the Internet cameo. “As their valet!” says Rich Moore. Just perfect.

Ralph Breaks the Internet is in US cinemas now, and hits screens in the UK on November 30 and Australia on December 26.