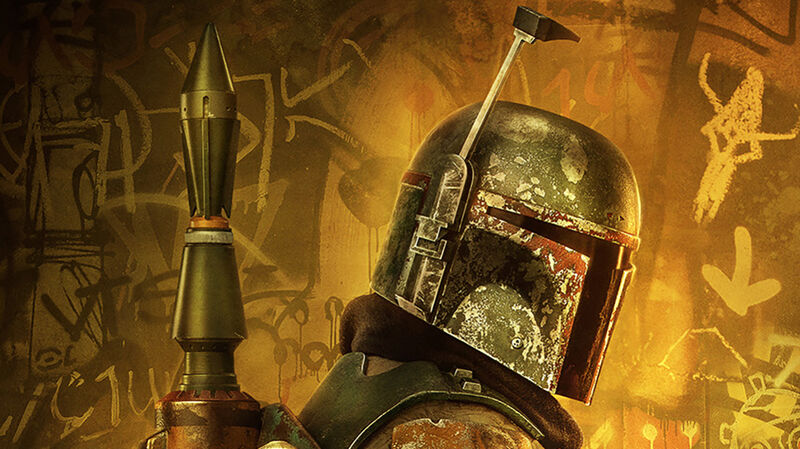 Not-So-Hidden Clues Hint at What ‘Star Wars: The Book of Boba Fett’ May Explore

When Season 1 of The Mandalorian began to air in November of 2019, I joked at the time that we were getting another “Dave Filoni special.” One season of surface-level setup, followed by each successive season getting weirder and diving down into more esoteric Star Wars lore. You know, the same way Filoni structured Star Wars: The Clone Wars and Star Wars Rebels.

What I didn’t expect was for Boba Fett to feature heavily in that lore. But here we are, at the end of The Mandalorian’s second season, and the erstwhile bounty hunter is poised to become a bigger player than ever in the Star Wars underworld…

THE BOOK OF BOBA FETT

Star Wars doesn’t usually do stingers. But for the season finale of The Mandalorian, Lucasfilm made an exception. Having kept his word to help Din Djarin rescue Grogu, Boba Fett and Fennec Shand find themselves back on Tatooine. The two of them clean house in Jabba’s Palace, wiping out Bib Fortuna and his flunkies with ease. Though it is worth noting that Fennec is ethical in her choice of victims, allowing Fortuna’s enslaved Twi’lek woman to go free. With the bodies of their enemies still warm on the floor, Boba alights upon the throne while Fennec celebrates with a bottle of galactic moonshine. The scene ends with a promise of more adventures to come next year.

From the official announcement in the StarWars.com press release:

Jon Favreau, executive producer of The Mandalorian, confirmed today on Good Morning America that the new series is currently in production and will arrive December 2021, only on Disney+. The Book of Boba Fett will be set within the timeline of The Mandalorian and star Temuera Morrison as the titular bounty hunter, along with Ming-Na Wen as Fennec Shand. Robert Rodriguez — who directed Chapter 14 of The Mandalorian, a thrilling installment that reintroduced Boba Fett to the Star Wars galaxy — joins Favreau and Dave Filoni as executive producer.

But before we can get into what to expect from The Book of Boba Fett, a Disney+ live-action Star Wars show set to air in December of 2021, we need to lay out what audiences will know going in. Here are the timeline facts we have as of this writing regarding Boba Fett.

*In 5 ABY, Jabba’s former beastmaster and Rancor trainer Malakili finds the recently killed sarlacc with no sign of Fett anywhere

Then there’s the marked difference in Boba Fett himself. Prior to this time in the sarlacc pit, Fett is mainly portrayed as a ruthless hunter and killer. In his dealings as a bounty hunter, Boba goes out of his way to inflict pain and suffering on any who cross his path whether they’re fellow hunters, marks, or simply innocent bystanders. He’s not above torture or flying extremely out of his way in an attempt to seek revenge on an old adversary. The Boba Fett from The Mandalorian, however? He is still ruthlessly efficient. But he isn’t cruel. And he appears capable of compassion and upholding a code of honor, even if it’s just his own.

All of these things add up to a very intriguing premise for The Book of Boba Fett. One that will be heavily influenced by whatever the bounty hunter was up to in the four years between his rescue from the sarlacc and his arrival at the feet of the dying Fennec in the Tatooine sands.

Of course, there are clues sprinkled liberally — both in The Mandalorian and other auxiliary Star Wars sources — that hint all might not be as it appears. For example, we know from Aftermath: Life Debt that Jawas sliced open and looted the sarlacc for anything valuable while scavenging Jabba’s barge. While Malakili never peeks inside the gutted creature when he comes across it in 5 ABY, a lack of struggle or screams for help are good signs the Jawas not only got Boba Fett’s armor, but the man as well. But the sarlacc had yet to be eaten by other Tatooine fauna, indicating the pillaging is fairly fresh. That leaves about a four-year gap in Boba’s life that is currently uncounted for.

This, in turn, leads to intriguing questions like “Did Boba Fett trade his armor to the Jawas so they would rescue him?” and “Why didn’t he retrieve his armor from Cobb Vanth before Din Djarin got ahold of it?” and “What exactly was Boba doing for over 1,400 days?”

It seems likely Fett traded his Mandalorian armor for his life. It seems probable his code of honor kept him from killing the Jawas and taking his armor back. It seems plausible Boba spent time with the Tusken Raiders learning how to use a gaffi stick, and that Cobb’s cordial relationship with the Jawas — or Boba’s code of honor in dealing with the Jawas — provided Cobb with protection. But the biggest clue to how the bounty hunter spent his time is hiding in plain sight on the throne in Jabba’s Palace in The Mandalorian Season 2 finale.

Old Tongue. Again. My nemesis. A Star Wars language that keeps cropping up. Mostly to taunt me with gibberish since the Rosetta Stone was included in a single piece of merch available only at a single shop inside Star Wars: Galaxy’s Edge and clearly no one intended anyone to translate much of what the Old Tongue is used for. But not this time. No. This time, the Old Tongue speaks. And what does the throne say?

That’s it. That’s all it says. You can see where the text is mirrored on both the top and bottom rows. The “B,” “O,” “A,” and “T” are direct one-to-one translations. The “F” and the “E” are variants of the Old Tongue letters, but consistent enough to be legible. Sort of how Aurebesh is the main written language of Star Wars but it has regional variations such as the inscription on Enfys Nest’s helmet (Dishabesh) or the dataplaque in the possession of the Crimson Dawn crime syndicate (Protobesh).

Now, it could just be an Easter egg hidden for the handful of people who are invested enough to find it. The “Drink more Ovaltine” of Star Wars. But what if it’s not? Why would Boba Fett’s name already be inscribed on a throne in Jabba’s Palace, written in a dead language?

STRAP IN, IT’S GONNA GET WEIRD

The second season of The Mandalorian was bursting with deep lore. From the krayt dragon pearls to the ball Grogu sat upon at the temple on Tython bearing a striking resemblance to Zeffo power supplies to the strong insinuation that Palpatine was using Grogu’s blood to try and artificially increase the midichlorian count in his Snoke clones, the show led audiences deeper into the mystical side of Star Wars by inches. This brings me to the sarlacc.

Sarlaccs are deeply unsettling. Taking approximately 30,000 years to reach maturity, they are neither plant nor animal. In-universe xenobiologists are consistently stumped by this creature that reproduces by spewing spores into the upper atmosphere that can withstand the vacuum of space. About the height of the Great Pyramid of Giza, sarlaccs house multiple stomachs to imprison future food while they slowly digest older prey. All that scar tissue on Boba Fett’s body? The corroded nature of his armor when in Cobb’s possession? All due to the sarlacc. In fact, the beskar armor is probably what kept Fett alive long enough to be rescued. It also gives Lucasfilm a handy excuse for why Temuera Morrison looks older than Boba should at this point in the timeline, since he was not created with the clones’ accelerated aging feature. But wait, it gets creepier.

In Star Wars Legends stories, sarlaccs were bioengineered prisons of a sort. Prey was stuck to the walls of the sarlacc by numerous hollow spines that replaced all vital fluids with the creature’s own juices. This would keep the victim alive and in agony while the sarlacc fed. It would also cause the victim to meld with the sarlacc, giving the creature a kind of hivemind sentience of accumulated memories stolen from its prey. Kind of like the Bor Gullet from Rogue One. So it’s within the realm of possibility the personality changes in Boba Fett are a direct result of him having untold centuries of fractured knowledge amassed by the sarlacc rattling around in his head. Including, perhaps, a dead language.

I suggest that Boba Fett was already the kingpin of Tatooine’s underworld prior to the start of The Mandalorian. Four years is a lot of missing time. Fett still had access to his ship, yet he remained on the backwater world, without retrieving his father’s armor. He had enough money and clout to save Fennec’s life with advanced cybernetics, as well as repair his beskar. Neither of those things are cheap or easy. Who is to say Bib Fortuna was surprised to see Boba alive because of the events in Return of the Jedi? He could just as easily have been shocked that Fett and Fennec survived boarding Moff Gideon’s ship full of Dark Troopers. Fett’s behavior towards Fortuna felt personal and like nothing we saw between the two in Return of the Jedi. Why kill him when Bib Fortuna had shown himself to be politically savvy enough to see a new master when they come blasting into the throne room unless it was personal?

THE ONLY WAY IS FORWARD

Regardless of the specifics though, by the end of The Mandalorian Season 2, it is clear Boba Fett has plans. Plans that involved the seedy underbelly of the galaxy. With the Hutts destabilized and the status of Crimson Dawn unknown in the aftermath of Maul’s deaths, there are numerous opportunities waiting for the right person to come along and take advantage of the chaos.

Perhaps Boba might even have a run-in with another crime boss: Han Solo’s old flame, Qi’ra. After all, the last we saw of her in Solo, she was about to be taken under the wing of Maul himself. If anyone is still directly the Crimson Dawn empire, the smart money is on her. But whether Lucasfilm brings in known quantities or blows open the lore with all-new factions jockeying for power, organized crime has always been the third faction of Star Wars. It’s about time audiences got to know how things work far from the light of the Jedi Temple and the secret machinations of the Sith.