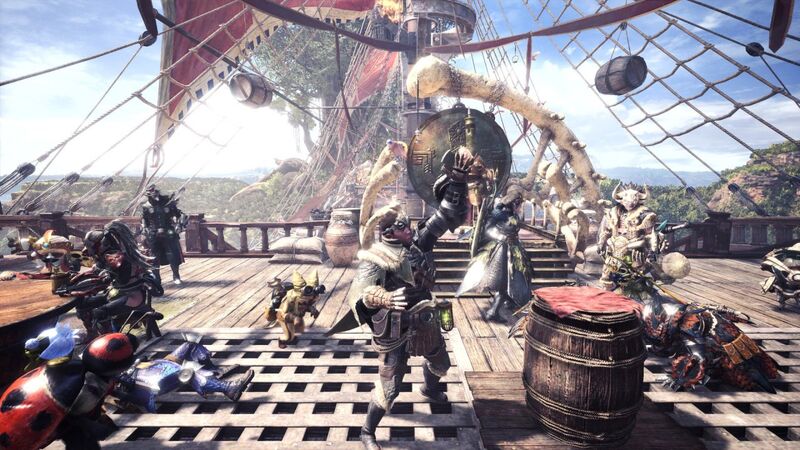 Forget ‘Destiny 2’, ‘Monster Hunter World’ is the MMO-lite You Need in Your Life

When it first launched, we were big fans of Destiny 2. Wowed by its stunning art direction, tight gunplay and surprisingly entertaining 20+ opening hours, it made a pretty great first impression. Yet for the number-crunching masses, this was a game that was all about the long haul — and after its promising start, fans couldn’t wait to see what exciting new content they’d get as the quasi-MMO continued to grow.

Just like its predecessor, once its main quests were done, it quickly became apparent that Destiny 2’s end game content was woefully lacking. With fans promised a long-lasting grind-athon and left with very little to do except shell out for (some seriously underwhelming) DLC, frustrated players soon left the game in droves. For a few difficult months, it looked there would be nothing to fill that loop-shaped hole in gamer’s hearts.

Luckily for us loot-loving nerds then, a new game has finally come along to scratch that all-consuming grinding itch – Monster Hunter World.

At first glance, a third-person game about slaying dinosaurs and a first-person space shooter couldn’t look any more different, but dig a little deeper and they both share that same addictive core gameplay loop.

Tasked with slaughtering all the baddest monsters that roam the land, World sees players taking on massive dinosaurs either solo or with up to three friends. Here, the goal is simple – defeat tough foes so you can get cool materials, and ultimately – use said material to get yourself some sexy new gear.

Yep, this medieval-looking Jurassic Park simulator is all about ranking up while netting the most awesome weapons and armour you can get your hands on. Sound familiar?

Unlike in Destiny though, getting new gear in Monster Hunter requires tracking down multiple materials and actual crafting. This means that if you want to earn yourself that upgraded weapon or badass armour set you’ve been pining for, you’ll have to carefully plan what (and where) you hunt. Coming off the back of Bungie’s shooter, it feels incredibly refreshing to be able to know exactly what you have to do in order to get that next set. Say goodbye to random engram drops, and hellooo to transparent combat-based grinding.

Just like in Destiny, whether you play alone or with a rag-tag group of hunters, it all counts towards the same goal. Where in previous Monster Hunter games single-player and online quests were entirely separate entities, this time around, everything after the tutorial can be played online.

With a ton of quests ready and waiting for you and your friends to take on, there’s a surprising amount of variety on offer here. With each monster behaving differently to the last, your hunting party will need to approach each new beast from a different angle, and epmploy new tactics in order to topple every subsequent behemoth. Speaking of tactics, there’s a surprising amount of loadout options for you to choose from in Monster Hunter World.

While there aren’t set classes here like in Bungie’s sci-fi shooter, if you want to defeat some of this game’s trickiest monsters, planning your fire party’s loadout is still just as essential. With 14 different basic weapon types and a mind-boggling amount of different armour and item variations, there’s a staggering amount of different party configurations to play with in Monster Hunter World.

Thanks to its generous selection of pointy killing tools,  even if you do manage to power through all the 40+ hours worth of quests quicker than expected, mastering each type of weapon means that there’s still a hell of a lot for players to do here. With each weapon set feeling entirely different to the last, we came away impressed with how much variety in gameplay there is on off here.

And that’s before you even take into account your foe’s elemental weaknesses, especially upgraded weapons and other strategies. It’s this surprising breadth of loadout options that should ensure Monster Hunter World stays fun to play for some time to come.

Speaking of keeping the player base for the long haul,  refreshingly, Capcom has confirmed that it’ll be giving players even more to do — and without asking for a penny.

In a gaming landscape where most new AAA title attempt to hide fun behind paywalls and squeeze every last bit of cash out of its players, it’s a relief to see that the Japanese publisher seems to just want to keep its playerbase entertained.

While DLC will be coming to all platforms, PlayStation owners get the first bit of fun here, with a Horizon Zero Dawn themed DLC pack coming to PS4 on the 26th of January.

As you’d expect from a quasi-MMO, Monster Hunter also has its own hub world. Here you can mess around with your companions pre-mission, buy some snazzy new gear and even engage in a cool little arm-wrestling mini game. Sure, you COULD arm wrestle your friends in real life, but why not do it while dressed in monster parts and surrounded by dancing cats?

Whether you’ve been put off by the seemingly daunting scope of the series, or have simply never heard of Monster Hunter before, World is the perfect time to dive in. Freed from the shackles of the underpowered 3DS hardware, this new entry is utterly gorgeous to look at and from my time with it so far —  it’s looking like one of the most enjoyable online RPGs of the generation.

I was pleasantly surprised at just how much there is to do in Monster Hunter World and more importantly how much fun I’ve had with it so far. If you’re looking for a game to scratch that MMO itch while still giving you a real challenge, Capcom’s latest may just surprise you.