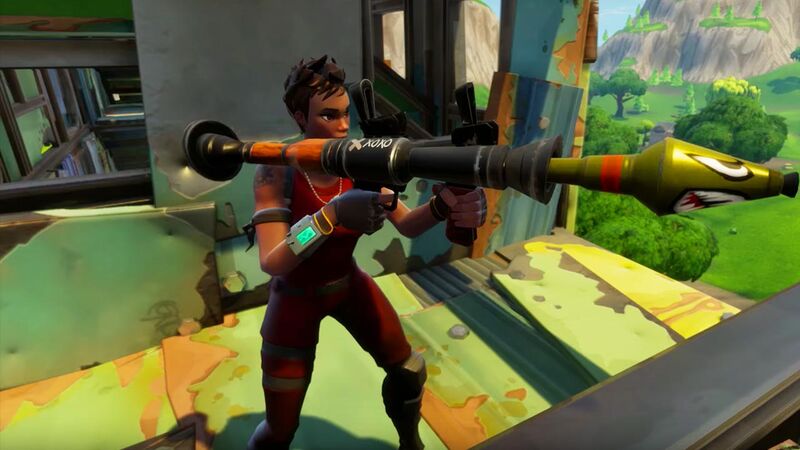 Even if you’re a stalwart supporter of the original article — PlayerUnknown’s Battlegrounds — you’ve got to hand it to Epic Games. Fortnite Battle Royale has smartly harvested the materials available and built up a phenomenal following of its very own.

Does the addition of insta-building and outlandish dance emotes improve the formula, or do those trimmings (coupled with a lack of chicken dinners and pans to kill people with) ruin what was once a pure PvP experience? That’s a debate we’ll leave to angrier, more invested folk. Today, we’re just here to stop people from turning your head into a canoe…

Landing first is imperative to your survival, lone ranger. When you’re finally armed with something decent, be aggressive in the opening minutes of any match — this is when your opponents are at their weakest, after all.

Try to gain a height advantage in all encounters as it will markedly increase your odds of landing bullets in your enemy’s bonce (climb a building if it’s available, or just DIY your own platform on the spot). Also be aware that all of the strategies presented here can be used in Fortnite Mobile, too.

Don’t forget that approaching storms will allow you to fairly accurately guess where your enemy is going to run next. If you’re standing between an enemy and the safe zone, the advantage is yours and you need only hold your ground and wait for them to do something desperate (as per the latest hot-fix, storms will deal them 10 damage per tick for all ring phases).

Aim to enter any firefight with 80-120 wood. Built cover will save your life, but you can’t make your slanty shanties without wood and they cost ten materials apiece. Harvest trees as you go and get used to the idea of instinctively building when you hear shots fired.

Never forget that sticking together is what good teammates (and waffles) do — so always, always, always land like your parachutes got tangled. Move together through buildings and travel to new towns as a unit. Keep one eye on your compass so you can make and receive enemy spotting calls to one another via direction.

Obviously, use a microphone, or you’re at a severe disadvantage trying to communicate imminent death via the medium of interpretive dance emotes. If somebody in your team does get dropped, don’t even think about healing them without hugging said victim in a protective, three-walled shed. Revives take ages in this game.

Alternatively, be that guy: use your downed pal as bait, wait for their killer to wander in for the coup de grâce, and then put one right in their thinking machine.

The meta of Fortnite (i.e. which weapon will trump another) is in a state of constant flux due to a mixture of player favouritism and Epic Games responding in turn with hot-fix patches. That said, we can give you a general idea.

The benefits of having a clear understanding of which boomsticks you should use are many. A player who knows exactly what they want will spend less time umming and ahhing when the opportunity to trade up arrives. In short: do your theorycrafting off the field.

Conversely, you should know that a lesser player will spend time running the pros/cons in their head when they stand on a gun pick up. This is far and away the best time to ambush them or line up a headshot.

All this said, don’t doggedly stick to one super-sweet gun all match. Try to keep a balanced inventory of guns so you can constantly switch, based on your surroundings. For instance, if you’re room clearing a building, or are in an a confined space and/or choke point, make like Cpl. Dwayne Hicks and whip that shottie out for close encounters.

Ideally, you’re going to want to flesh out your five inventory slots with one assault rifle (or a silenced pistol), a shottie, a sniper rifle, a “splodey weapon” (rocket launcher is best), shields and healing items.

Which guns you should put on a pedestal will vary from player to player, but in general you ought to prioritise the following, from most desirable to least: SCAR assault rifle (great all-rounder), pump shotgun (more damage than the tactical variant), bolt-action sniper, and rocket launcher.

Here’s a lukewarm tip for the newcomers: knowing which gun is king will only get you so far. You also need to know that every gat in Fortnite is categorised into one of five rarities, easily identified by their colour. Basically, the higher the rarity the better the killing power and handling of the weapon. From worst to best: Common (Grey), Uncommon (Green), Rare (Blue), Epic (Purple) and Legendary (Orange).

Last tip of the day: use third-person view to your advantage. Embrace the joy of having a phantom camera man behind you. When you plant your face against the wall of a corner, ol’ spectral Spielberg will still have a view of what’s happening around it. Don’t be afraid to incorporate this and camp a little to plan an ambush. Just be aware that no camper ever won a post-match popularity contest…