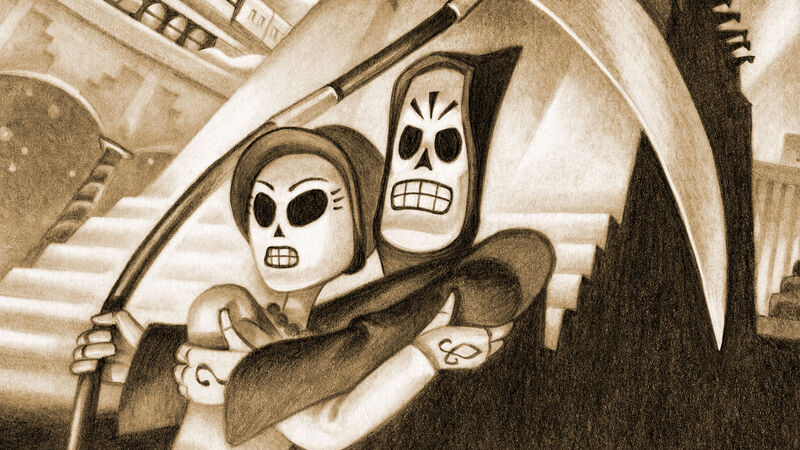 ‘Grim Fandango’: the Adventure Classic that Almost Killed the Genre

Despite being a title that gamers ‘of an age’ get dewey-eyed at the very mention of – and despite being, look away Guybrush, arguably the greatest point and click adventure of all time – it’s been said that Grim Fandango was the game that killed off the point and click adventure game format. So beloved were these games for a certain generation of player, that if this is the case, it’s a casefile that needs reopening. The evidence for the prosecution appears to be damming.

After its release in 1998, publisher LucasArts released just one further adventure game of the kind they’d become so lauded for – brilliantly written, cinematic, often obtuse, but rarely infuriatingly so. This would be 2000’s fourth Monkey Island adventure Escape From Monkey Island.

Though creator Tim Schafer, who left the company shortly after the Dia De Los Muertos themed adventure to form Double Fine Productions, has insisted Grim Fandango was to some degree profitable, it can’t have been significantly so. The game had a $3 million production budget – pretty big for the time – and designer Dave Grossman, formally of LucasArts, latterly of Telltale, has said “it was pretty ambitious and expensive, and I don’t think it made very much money back.”

Is it fair to say that, as well as signalling the creative peak of the point and click era, Grim Fandango was also responsible for turning the lights out with a bony finger too? It is perhaps more complicated than that. The late nineties saw a seismic shift in gaming, thanks in part to the release of PlayStation, and to Sony positioning said machine as part console, part lifestyle product, with a raft of titles that grown-ups were being told they could play without feeling any shame. Resident Evil 2, Metal Gear Solid, Final Fantasy, Tomb Raider, Silent Hill; these were classy, smart, dare we say, sexy adventure games. The Emperors New Clothes. And very stylish threads they were too.

Regardless, Grim Fandango, now twenty-years old, was certainly a difficult sell. It would take an extensive elevator ride for the elevator pitch to be understood, let alone successful. That it was made at all is testament to the respect Shafer’s seismic creativity was held in within the era. In the 2008 book Rogue Leaders: The Story Of LucasArts, it’s said that Shafter’s pitch to make the game passed with a ‘breeze’ based on his prior work on hits like Day Of The Tentacle and Monkey Island.

Grim Fandango, see, is a game about skeletons, stylised Mexican calaca, set within a world that is part Day Of The Dead, part classic film-noir, with a smoky jazz soundtrack and nods to movies like The Maltese Falcon, On The Waterfront and most notably the 1942 romantic drama Casablanca. There’s a bit of Aztec mythology in there too, thanks to Schafer’s lifelong fascination with folklore, stemming from anthropology classes he took at university.

There’s also flourish of art deco in the world design, most significantly within the vast architecture that scrape the clouds above The Land of The Dead wherein the story is set. Said story is centered around the protagonist Manuel ‘Manny’ Calavera (calavera being Spanish for skull), a sort of travel-agent-cum-Grim-Reaper trying to work off a debt in order to travel to death’s final stop, The Land of Eternal Rest.

Elsewhere, if you know what you’re looking for, the influence of late cartoon genius and Hot Rod legend Ed ‘Big Daddy’ Roth can be seen within the game’s vehicle design, as well as in the creation of Manny’s demon sidekick, Glottis. Schafer has said that the 1944 movie Double Indemnity, in which an insurance salesman becomes unwittingly embroiled in a murder was a key influence. As were the books of novelists Raymond Chandler and Dashiell Hammett. For the era, and in truth, in many respects even now, Grim Fandango was a hugely ambitious undertaking.

Rather than being the title that killed the genre, it might be fairer to view it as its last stand. Schafer and LucasArts certainly went all in on trying to invigorate the adventure game genre with Grim Fandango. New coding engines, new design techniques, the lot. The title was the first LucasArts game since 1986’s Labyrinth: The Computer Game – licenced product of the beloved Jim Henson directed, David Bowie staring fantasy film of the same year – not to use the studios traditional SCUMM engine; created by designer Ron Gilbert to aid the creation of LucasArt’s first graphic adventure, Maniac Mansion. Acronym fans may be interested to know that SCUMM is short for Script Creation Utility for Maniac Mansion. Obviously.

Instead, Grim Fandango was made using the GrimE engine, borrowing heavily from the basis of the Sith engine, which had been pioneered during the creation of 1997’s Jedi Knight: Dark Forces II – a game which for the time was hugely enjoyable. Impressively, GrimE (grime, like scum, being a sort of residue, innit) was an engine capable of true 3D rendering. Thanks to LucasArt’s programmer Bret Mogilefsky’s interest in it, the engine was built using the free scripting language Lua, which would go on to be used in Escape From Monkey Island. Like within that game, in Grim Fandango, GrimE was used to mix static pre-rendered background images with 3D characters and objects. The result was a world that felt like the smartest, coolest indie comic book come to life.

Is Grim Fandango a good game? Pah. It is a great game. It’s the ridiculously talented Schafer’s best example of world building. It’s the sort of game that makes you feel sad when the adventure comes to an end. It’s also ridiculously funny; take this exchange between Manny and the game’s principal antagonist, Hector LeMans. “Oh Manny… so cynical… What happened to you, Manny, that caused you to lose your sense of hope, your love of life?” A pause, Manny replies, deadpan even for a besuited skeleton. “I died”.

Sure, the game’s cult following grew largely due to it being extremely difficult to track down and play until a remastered version of the game arrived in 2015 (it’s been said this took some time due to LucasArts employees of the time taking home copies of files containing code upon leaving the company, resulting in Schafer having to trawl employee files and contact them asking if they still had them) but like vinyl, like magazines, not like the Penny Farthing, good ideas never die, even if their popularity wanes. The remaster has just come out on Switch too — and we can’t think of a more charming adventure to distract you from your sweaty commute.

It’s extremely unlikely that the point and click adventure will ever make a comeback to enjoying the sort of popularity that they did prior to Grim Fandango‘s release – yet the acclaim that accompanied the release of last year’s Ron Gilbert and Gary Winnick new-if-retro-themed adventure Thimbleweed Park (whose crowdfunded production campaign asked for $375,000 yet resulted in a cool $626,000) suggests the demand for them still remains. If you’re one such person, there can be no better way to celebrate this special games twentieth birthday than giving it another playthrough. And admitting it wasn’t Grim Fandango that killed the genre, but did mark the moment the point and click adventure peaked.