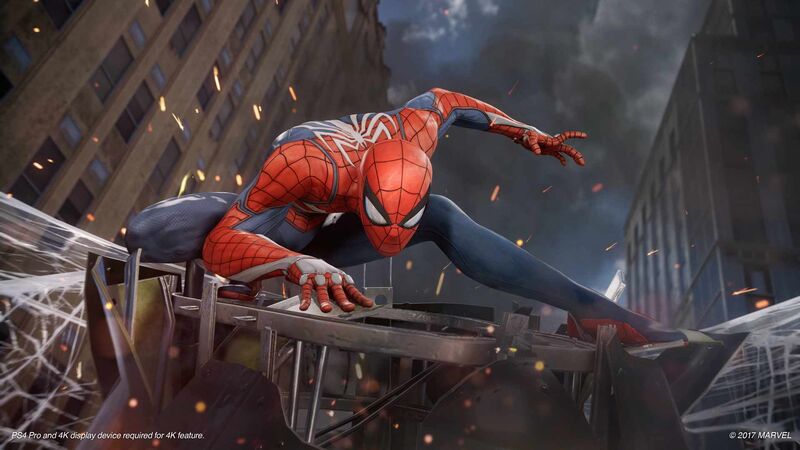 Legendary developer Insomniac Games has just entered a new era in its illustrious history. For over two decades, the studio has proven itself to be one of the industry’s greatest creators. How many independent developers can claim to have created three hugely successful universes in Spyro the Dragon, Ratchet & Clank and Resistance?

But it was time for a change.

For the first time in its 24-year history, the Californian studio has taken on a licensed product in Marvel’s Spider-Man. Taken on and won. As we reported earlier this week , Marvel has given its official seal of approval to Insomniac’s new game, which is due out on September 7 as a PlayStation 4 exclusive. It will be the first game based on a Marvel property to ever feature the iconic flipbook logo. It’s an honour the studio does not take lightly.

It’s no wonder that Marvel is so enamoured with the game. We’ve beaten it, and it’s an exceptional gameplay experience.

It’s not just about the combat either. The combat is great, make no mistake. Even from the opening moments, hours before you’ve dived deep into Spider-Man’s unlock tree, he has more moves available than the cast of Street Fighter. Or at least that is how it feels. Organically shifting between aerial, melee, long-ranged and environmental attacks, Spidey bounces around the streets and buildings of New York like a ping pong ball shot from a cannon.

But the game delivers more than just eye candy and cathartic combat. It’s the story that really helps set this Spider-Man apart from the 56 other games that have featured the iconic superhero.

Working on its first licensed game wasn’t going to stop Insomniac from building something new. Marvel’s Spider-Man isn’t based on an existing comic or film. It’s a completely new universe, staring the same characters and villains we’ve come to know and love, but in very different places in their lives.

Peter is 23 and on the cusp of being evicted from his house. MJ broke up with him some six months earlier and despite her being an investigative reporter at the Daily Bugle, they haven’t spoken since. Norman Osborn is mayor of New York, for crying out loud! So while Spider-Man might be kicking butt, Peter Parker’s life is a mess.

Indeed, payers experience the rollercoaster of highs and lows that come with being New York’s saviour not just from Spidey’s perspective, but also from Peter Parker’s. So while players no doubt know New York back-to-front by now, and even the experience of swinging between its skyscrapers, the Spider-Man world here is fresh. This is new territory.

The approach certainly impressed Marvel. In addition to the aforementioned seal of approval, there is a prequel novel coming out, and Insomniac’s Spider-Man is joining his multiverse brethren in the upcoming Spider-Geddon comic. The game is now part of the overall Marvel lore. Ingrained. Intertwined.

Given this success with its first licensed title, it makes you wonder whether Insomniac Games would be open to doing more such games. Be that other Marvel titles, or potentially even a Marvel’s Spider-Man 2. It was a question we put to Insomniac’s community director, James Stevenson, when he toured the game to media pre-release. Stevenson has been with the developer for 12-years, and his insights were telling.

“Sure we’d be open to another licensed game. I feel like the question hints to whether there are downsides to it. It’s different of course; you have other people involved who can tell you whether something is on-brand or off-brand, which is different for us than, say, working on a Ratchet & Clank.”

“But it’s not like we wanted to go too far away from what makes Spider-Man great. It had to be an authentic experience, so in some ways, it’s helpful having extra people around who know the character so well and are pushing you to make things better. Working with Marvel probably drove us to be better than we can be when we’re working on our own thing.”

It a surprising admission. It’s a long way from any confirmation that another Spider-Man or Marvel game is in the works at the studio, but it reveals Insomniac has an interest in the idea.

In fact, Stevenson spoke numerous times about the benefits of collaborating on a product. “Marvel wasn’t putting up roadblocks or anything like that, it was more from the perspective of wanting to help us make a great Spider-Man game,” he said at one point. And later, “Marvel basically said, ‘here are 50-plus years of comics, characters and stories. Look through all of it and pick what you want.’”

As mentioned, there is a prequel novel focused on Insomniac’s Spider-Man game available, and an upcoming comic featuring him, so there’s a groundswell of support for the developer within Marvel’s walls. When we pushed Stevenson to see if Marvel could take Insomniac’s work even further, maybe with a TV show or a movie, he was cagey, but willing.

“I’m not sure, we’ll see. The game is trending really well and Marvel is super excited about it so if there is demand, who knows. They may choose to further blow out our universe and explore it more in the future.”

Either way, one thing is for sure: if you’re a comic fan or just a lover of great action games in general, mark September 7 down in your diary.