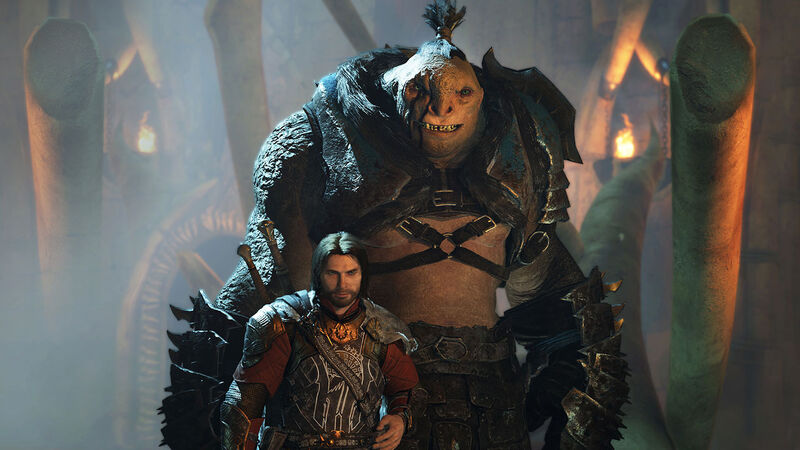 ‘Shadow Of War’ Review: An Almost Brilliant Game Let Down By A Terrible Story

When you first step foot in Shadow Of War’s version of Middle-earth, it’s difficult not to be swept up in a wave of Tolkien-soaked nostalgia. With wonderfully voice-acted orcs slinging seething insults at you, and your swinging sword sending the game’s orchestral score swelling into a roaring crescendo, it’s difficult not to feel like the Gondorian warrior you were always destined to be.

As far as accurate digital depictions of Middle-earth go, then, it’s hard to imagine anyone doing a better a job than developer Monolith has with Shadow Of War. Unfortunately, however, all of that carefully constructed Tolkien-esque atmosphere is quickly shattered the second you trigger a cutscene.

While the combat system still feels brilliant (and still unashamedly stolen from RockSteady’s Arkham series), it’s Shadow Of War’s half-hearted dialogue and paper-thin characters that drag this potential game of the year contender back into merely ‘good’ territory. While the middling narrative wasn’t such a problem in its sleeper-hit predecessor, for this anticipated sequel, we expected developers Monolith Productions to lift something else from the Arkham series – its refreshingly authentic-feeling narrative.

With Rocksteady’s seminal series delivering a Batman story that felt just as engaging as Bruce Wayne’s cinematic capers, it was one of the first games to really offer a story that stood toe to toe with its source material.

Yet, as Warner Brothers attempts to translate another one of its adored IPs into a gaming classic, it seems to have put gameplay first and Tolkien’s beloved lore second. While Rocksteady understood the appeal of Batman as a character and seemingly took notes on the intricate web of characters that make peeping into Gotham so compelling, Shadow Of War simply feels like a game that doesn’t understand its source material.

This action-packed adventure puts players in the shoes of Gondorian protagonist Talion once again, as he continues his quest for revenge. Consumed with rage at the death of his family, our hero joins forces with one of Tolkien’s actual creations, Celebrimbor, a long-dead Elf who seeks to prise Middle-earth from Sauron’s iron-clad grip. While that may sound all well and good, one of the many things that made Tolkien’s body of work so compelling was how utterly clueless (and seemingly incapable) its Halfling heroes were.

With its pacifistic little protagonists thrust into increasingly desperate situations, Lord Of The Rings and The Hobbit told stories of the unlikeliest of people coming together to save the world. In Shadow Of War, however, there is no such nuance.

Still, there is one aspect where the game excels at giving us some serious Fellowship feels — its aesthetic. With each Orc and enemy looking and moving just like they did in Peter Jackson’s mesmerising movie trilogy, Monolith has done an admirable job of creating environments that transport players to Middle-earth.

It’s not just the absolutely ridiculous narrative that might disappoint fans though. When Shadow Of Mordor launched back in TKTK, its ambitious nemesis system and addictive combat loop caught critics and consumers completely off guard. After years spent wading through a sea of cookie-cutter open world experiences, Mordor saw you fight your way through a hierarchy of orc leaders who not only remembered you, but grew more powerful with each encounter. It was a refreshing and surprisingly unpredictable game mechanic incorporated into an increasingly stagnant genre.

But has this cool mechanic actually changed much? The answer unfortunately, is not really. While the core gameplay loop is still enjoyable here, this is a sequel that largely iterates rather than innovates.

In War, instead of simply just starting grudge matches with green uglies, this time you do so with the goal of recruiting you very own orc army, Pokemon-style.

With Sauron back at it again and our protagonist armed with a new (and like, WAY totally better ring, you guys) Monolith has added in an RTS-lite element to proceedings. Once you’ve amassed your fearsome army, you choose your best War Chiefs and have them storm the fortresses of Sauron’s Overlords. This results in fun and (often) suitably epic-feeling Two Towers-esque battles, but unfortunately, it takes far too much pre-amble before you can actually feasibly be ready to siege each fortress.

It’s this unnecessary repetition and filler that sadly sours the experience a bit throughout the latter game. Without a strong enough narrative to keep players motivated, and stronger orc leaders requiring increasingly cheap tactics to defeat, a once fun adventure soon becomes a bit of a slog.

Is Shadow Of War Any Good?

Shadow Of War isn’t a bad game — far from it —  and that’s the thing that we find most frustrating. Its Nemesis system is still as wonderfully compelling as it was two years ago, the new RTS-esque siege system is a ton of fun and hopping around slaying all manner of fantastic beasts is just as brilliant as it always was. Yet, despite this open world opus being a grin-inducing experience initially, it’s difficult not to come away disappointed when this game’s story feels like such an afterthought.

With Lord Of The Rings featuring one of the richest and most loved lores of pretty much any piece of fiction out there, it’s baffling that Warner Brothers didn’t scour Tolkien’s works and manage to spin a more memorable yarn. For those looking for some fun-feeling gameplay, like us, you’ll probably thoroughly enjoy Shadow Of War’s mindless action. Yet, without a decent story to keep you motivated, the once compelling adventuring slowly turns into a repetitive grind.

For those who missed out on the original, there’s an enjoyable (if ridiculous) open world fantasy game on offer here. Yet, for the gaming series’ inevitable third outing, it’s about time that Tolkien’s fascinating stories finally get the intricate and multi-layered narrative that they deserve.