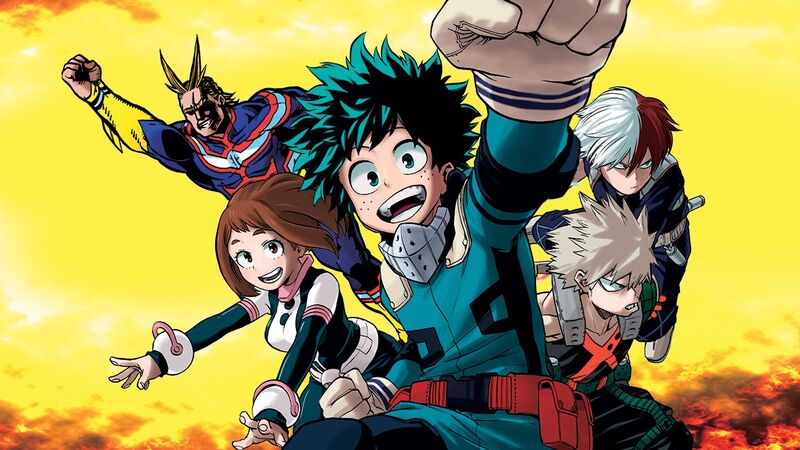 My Hero Academia is nothing less than a global phenomenon. It’s one of the most successful manga and anime series’ currently in production and has established itself as a beloved show among fans around the world. Like all good stories, however, My Hero Academia finds its inspiration in other corners of pop culture. And for My Hero Academia, one major inspiration is Star Wars. So much so that a Star Wars and MHA collaboration poster is in the works and will hit the pages of the manga early next year.

Beyond the much-anticipated mash-up poster, My Hero Academia has used many references to Star Wars in the manga and anime, whether it’s locations, races, or iconic characters. Here are five times MHA showed just how inspired it is by one of the most influential sci-fi franchises ever.

Tatooine Station began the long-running trend of one-off locations appearing in My Hero Academia that reference places in the Star Wars universe. Usually, these references are little more than just a wink to the audience, but in this instance, there’s actually a bit of narrative weight to this one.

Just as Anakin and Luke Skywalker begin their respective journeys on Tatooine, so too does MHA‘s lead character, Izuku Midoriya. Except in Midoriya’s case, Tatooine is a train station instead of a crummy desert planet. With MHA opening on Midoriya arriving at a location bearing this name, it establishes that this is his story and his journey we’re about to follow.

This reference is a little more subtle but is, in fact, a nod to the ice planet Hoth. In My Hero Academia, Hosu is a district in Tokyo where Midoriya and his friends do battle with the Hero Killer, Stain. While successful in apprehending the villain, the fledgling heroes learn the harsh realities of the profession they desperately want to enter into.

In Star Wars, Hoth is a planet that appears at the beginning of the fifth – or technically second? – movie. At the beginning of The Empire Strikes Back, the Empire destroy a Rebel base that’s located on this planet. While not necessarily the most important planet in the Star Wars universe, it became a fan favorite location due to establishing how varied and diverse the planets in Star Wars can be.

The shopping mall that Class 1-A visits towards the end of the second season is known as the Kiyashi Ward Shopping Mall (Wookiees). This is a pretty obvious reference to the planet Kashyyyk and its Wookiee inhabitants. In MHA, the mall’s function is to serve as world building. It shows how clothes and other necessities are custom-made for people whose bodies have been altered by their “quirk” or special, superhuman ability.

Kamino has yet to appear in the MHA anime, but in the ward of Yokohama serves as a major plot location in the manga. Without getting into spoilers, this is where “Artificial Human” Nomus – one of the most powerful creatures in the series – are created using human test subjects. Professional heroes fight to uncover the location of the ward, and it’s likely to appear in the upcoming third season of the anime.

Similarly, in Star Wars, Kamino is where the production of the iconic clone troopers occurs. It’s also the birthplace of the fan-favorite character, Boba Fett.

Given the number of references to Star Wars in My Hero Academia, it’s no surprise that hero, All Might’s nemesis, All for One, is clearly inspired by the iconic Darth Vader. MHA’s most powerful villain has a face covered in scar tissue due to a previous altercation with All Might. This forces him to wear a black helmet with a skull-like design and a life support system whenever he leaves his secret lair.

Darth Vader is, well, he’s one of the single most iconic characters in pop culture. He’s terrifying, powerful, and apparently has an emo castle on a lava planet; which was one of the best parts of Rogue One. All for One definitely isn’t the first villain to lift elements for Darth Vader, and he certainly won’t be the last.