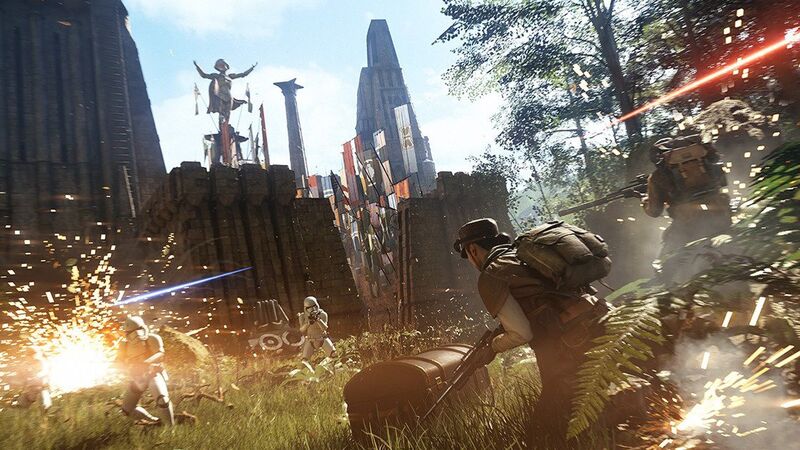 It’s difficult not to feel a bit sorry for DICE. After spending two years slaving away on Battlefront 2, strong showings at this year’s E3 and Gamescom slowly began to convince fans that this might actually be the Star Wars game that they’d always wanted.

Unfortunately, though, it only took a few days for all of that feverish fan anticipation to turn into a flurry of online fury.

When Battlefront 2’s long-awaited open beta launched last month, players quickly discovered that there was a dark side to this Star Wars–themed multiplayer shooter. As fans began to blast and force-push their way across the game’s multiple maps, it soon became apparent that impatient players would be able to buy their way to the top of the leaderboard.

With Battlefront 2’s purchasable loot crates dishing out multiplayer weapons and even the rarest character ability cards, long-time players could feasibly find themselves outgunned by a newbie who had spent until they got a top-tier loadout. For a skill-based multiplayer game, this news unsurprisingly became an online death sentence.

After widespread internet furore and a few weeks of silence from EA, DICE eventually released a statement promising to make some changes. Visiting the studio in Stockholm, we sat down with the game’s Design Director, Dennis Brannvall to find out more about how DICE plans to fix Battlefront 2’s controversial loot box system.

Fans have understandably reacted strongly to the game’s loot box system. If you continue to get negative feedback after launch, are you willing to completely reassess Battlefront 2‘s loot box system?

We’re willing to reassess anything, as long as it’s sane.

Even going back to the first Battlefront we made, we heard the feedback back then. We’ll continue that journey of responding with the community, making sure that they want to continue playing the game and [hopefully] they will continue to support us.

Despite you making changes to how paying for cards works, players can still get non-cosmetic items from loot boxes in Battlefront 2. Can you talk some more about the sense of progression in multiplayer and what you think will keep non-crate buying players coming back to the game?

For launch, we have milestones connected to classes. How you unlock new weapons to use within that class is going to be determined by how you actually play as that class. So, if you play as a ‘heavy’ and  continue playing as a ‘heavy’, you will complete these milestones . This can be play for ‘X’ amount of hours or kill ‘X’ amount of enemies, and completing those will get you new weapons.

In terms of further progression, ‘how do I get better?’, there’s always going to be crafting parts which is your way of customising your character. Sure, you’ll get some random stuff too that hopefully will get you excited about trying something new, but when it comes to my direct approach of getting my favourite thing, the crafting part is going to be the source for that.

You can get crafting parts from crates but also from completing other milestones. At the end of the day, everything is grindable in the game. So, that’s where we hope that players will continue playing.

Then if we see players saying ‘Hey, I really wish it would be this instead’, then we’ll take a good, hard look at [that] and reassess and see what comes out of it.

How are you taking steps to ensure that players won’t be matched with opponents who have paid their way to a good load out?

There’s always going to be different skill levels happening, but when it comes to matchmaking, we take into account not just our skill calculation but also your inventory and total play time to make sure when you’re going up against others they will be not only similar skill but hopefully, ideally, have a similar amount of Star Cards.

Obviously fan response has been overwhelming negative to the loot box news. How do you hope to win angry players back?

It’s about making sure that we maintain credibility within the community and [ensuring that] they feel excited about the work that we’re doing.

We want to continue to support them for the longest time possible.So, it’s just, yeah, that feeling-out process of understanding how [fans] want their progress to be made, and [figuring out] how we can do that.

To our fans, please continue sending feedback and we’ll try to make [Battlefront 2] as great as we possibly can.