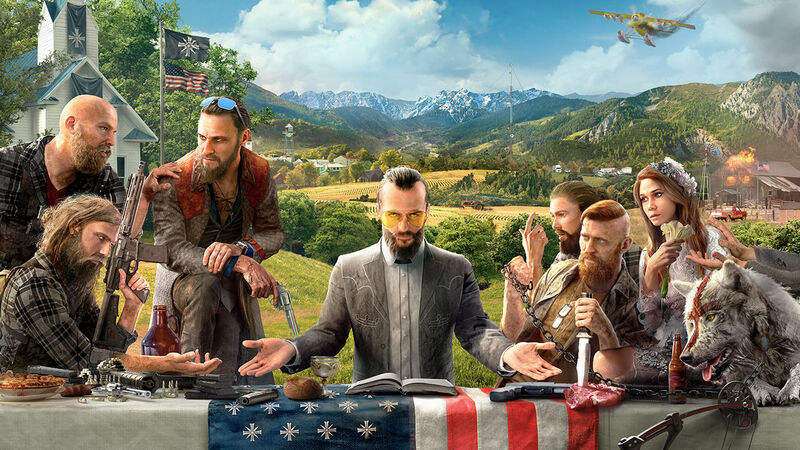 ‘Far Cry 5’ Has One of the Best Prologues Ever, but Can its Open World Match it?

As the intro to Far Cry 5 kicks into action, it’s hard not to feel a genuine sense of dread. Strapped into the back of a police chopper with a team of hardened US Marshalls, the officer opposite nervously cocks his Glock — and I make the mistake of taking a fleeting glance at our rapidly approaching destination.

Flying under the cover of darkness, the ground below me is Illuminated by a sea of roaring fires, revealing hundreds of shadowy figures lurking ominously in a make-shift guerrilla outpost. As if seeing exactly what I’ve just seen, our contact at the police station suddenly radios in, nervously insisting that it’s not too late to turn back. The Marshall sat opposite me scowls, “There are laws here, and we’re going to make sure that Joseph Seed obeys them.”

On the surface, our mission is simple; bring cult leader Joseph Seed into custody and stop his violent uprising before it gets out of hand. Yet, as the police helicopter begins its descent and I take my first step onto the heavily armed compound, it feels like we may already be too late.

Sowing the Seed(s) Of Dissent

Sticking closely to the other officers with my weapon drawn, I march cautiously through the apocalyptic-looking settlement. With cultists clutching assault rifles watching our every move, after a tense few minutes of pushing through this once quiet Montana town, we eventually arrive at an ominous-looking church.

My fellow officers fling open its double doors and standing topless at the front of the pulpit with his arms raised, Seed welcomes us with a foreboding smile. The other two cops and I push through the increasingly hostile congregation before we reach the pulpit, and the Marshall loudly declares that we’re taking Seed into custody.

Unsurprisingly, things don’t exactly go according to plan. As we hurry back towards the chopper with a handcuffed Seed in tow, an increasingly irate group of cultists pursue us. Holding them off with gunshots, we reach the chopper just in time to clamber aboard before more bullets begin to fly.

Just as we are taking off, several screaming cult members attempt to climb aboard and rescue their fearless leader. Failing to shake off a bat-wielding cultist that’s clinging onto my leg, the Marshall in front of me kicks my assailant off just before he takes a swing at me, sending the enraged cultist falling helplessly to his death.

Amid all the chaos, a calm, handcuffed Seed leans across his seat and whispers, “God won’t let you take me.” Seconds later, his chilling premonition comes true. Dragged down by the weight of our attackers and damaged by a sea of gunfire, the chopper is sent hurtling out of control and crashing into the woods below. As Seed’s followers drag him out from the wreckage, I see my dead colleagues around me and waste no time in undoing my seatbelt and escaping the upside down vehicle.

As bullets whizz past my head and I hear the blood-curdling screams of my co-workers behind me, one thing becomes abundantly clear while I run deeper into the woods — I’m stuck in cult country now.

As far as game openings go, it leaves one hell of an impression. Feeling more reminiscent of the sadism of Resident Evil VII than Far Cry, this spine-chilling prologue perfectly sells the game’s unique and terrifying premise. With the real world becoming an increasingly bleak and radical place, the idea of a warped Christian cult culling any non-believers feels worryingly plausible — and utterly captivating.

Sadly though, it’s almost too brilliant a concept for Far Cry’s gameplay to do justice. As my demo goes on, it’s a shame to see that this surprisingly tense and linear introduction feels starkly different to the rest of my experience with Ubisoft’s latest adventure.

Once you’re let loose across rural Montana, unfortunately, most of the intro’s carefully constructed sense of tension starts to dissipate.

Like with other Ubisoft open worlds, my time with Far Cry 5 was fairly enjoyable, seeing me engage in missions, clear outposts and fight an uncountable amount of enemies on the roads. Whether I was flying byplanes, saving ex-circus bears from cruel cultists, or fishing in Montana’s beautifully animated lakes, there’s a lot to like about the immersive rural sandbox that Ubisoft has created.

Yet, when you’re running around mowing down countless enemies and engaging in open world hijinks, the brilliant sense of dread that made the prologue so appealing has vanished without a trace. No video game has embraced the world of cultists before, and with an antagonist as twisted and compelling as Joseph Seed at the helm, Ubisoft had the potential to tell a very special and unique story here.

Still, that’s not to say there weren’t elements where everything came together. After rescuing a talented archer named Jess from an Eden Gate camp, I agreed to help her get revenge. As we wander through Montana’s lush countryside and make our way to our target, she tells a skin-crawling story about a twisted cultist named the cook, who imprisoned her family when she was a child.

Starving them all for days, he eventually asked the children if they were hungry. When they enthusiastically asked for food, he cut off each of the parents’ toes as they screamed in agony, force feeding the distraught kids bits of their parents before setting them aflame.

It was a powerful moment that genuinely made me feel a bit sick, but unfortunately, once we tracked down the cook, aside from a dude wielding a flamethrower and a few charred corpses, there was very little about the mission’s gameplay that did its chilling backstory justice. Within 30 seconds, the cook was dead — and the jovial open world shenanigans resumed. It all felt jarringly tonally inconsistent, which after setting up such an affecting story, was  a bit of a shame.

How Is Far Cry 5 shaping Up?

We’ve talked before about the ambitious steps that Ubisoft has taken with its fictional recreation of rural Montana, yet, this was the first time that we saw glimpses of just how compelling its Christian cult premise could really be. Admittedly, we’ve only played the game’s first few hours. Hopefully as Far Cry 5 opens up it will manage to bring all its various elements together in a way that does this wonderfully unique narrative justice.